Sisters puts the perfect Fey/Poehler pair in an imperfect setup. 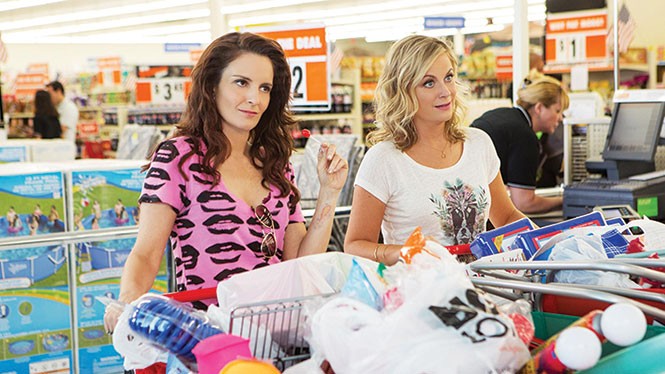 If modern film history introduced the notion of the "high-concept" movie—one where you can sell it to an audience based on a one-sentence plot summary—we might also need a name for a concept that's actually higher than high-concept. That's when a movie is effectively defined by its title and the casting of the lead actors—like "Chris Rock is Head of State," or "Dwayne Johnson is the Tooth Fairy," or perhaps the non plus ultra of this notion, "Arnold Schwarzenegger and Danny DeVito are Twins." It's marketing distilled to its purest form, understanding that moviegoers want to see the performers they like, and they want to know what they're going to see those performers do.

Sisters on some level feels like a continuation of that tradition, since "Tina Fey and Amy Poehler are Sisters" has been enough to make fans of the ex-Saturday Night Live castmates giddy at the prospect of seeing them work together, and work through a dramatized sibling rivalry. You might even have a sense for the kind of character each one will play, perhaps based on their on-screen dynamic in Baby Mama. It should be to the credit of everyone involved that Sisters goes another way—and maybe it would have been, if that other way had worked for both stars in the same way.

Because, instead of casting Fey as the together-if-high-strung sibling and Poehler as the inveterate screw-up, screenwriter Paula Pell flips the script. Poehler plays Maura Ellis, recently divorced, but still the one who checks in regularly with her parents (Dianne Wiest and James Brolin) and tries to take care of everyone; and Fey is Kate Ellis, a single mom who can't hold down a job. When their parents announce that they're selling the Orlando, Fla., house where the sisters grew up, they head home to clear out their old things. But instead of saying goodbye to their past, they opt to re-live it in the form of a huge party with their old high-school friends, only with a personality twist: Maura will get to be the wild thing, and Kate will have to stay sober and responsible.

It's a terrific premise, rich with possibilities at exploring how people mythologize the joys, conflicts and disappointments of adolescence, and sometimes find it hard to break free from them. Sisters occasionally pokes its nose into that territory, partly through supporting characters like a classmate (Maya Rudolph) who can't shake her high-school rivalry with Kate, and another (Bobby Moynihan) who still tries way too hard to be the comedian. Even the performances by Poehler and Fey are at their strongest when Maura and Kate are exploring the roles they never dealt with as teenagers—the popular party girl, and the one who has to clean up after the popular party girl, respectively.

But Pell was also a longtime writer for Saturday Night Live, and Sisters does often feel, in the way of so many contemporary broad comedies, like a series of sketches rather than a cohesive movie. Plenty of those sketches are aces, as Pell and director Jason Moore (Pitch Perfect) make use of their stars' skills for goofy bits like Maura's repeated inability to pronounce the name of a Korean beauty-salon employee. And John Cena gets yet another scene-stealing showcase, hot on the heels of Trainwreck, that proves his comedic chops. With few exceptions, however—like a particularly awkward moment between Maura and the guy she's trying to woo (Ike Barinholtz)—the scenes generally feel like punch lines in search of something to hold them all together.

There's also that little matter of the characters Poehler and Fey are playing, which seems like a clever notion on the surface. The problem is that Poehler is a far more versatile actor than Fey, able to be thoroughly convincing both as the control freak and the just-plain-freak. Fey is incredibly funny and talented, but it's hard to buy her as a slacker; it feels at times as though she's playing a smart person's parody of the girl who peaked at 17. While the chemistry between Poehler and Fey is too delicious not to provide some fun moments, they're not interchangeable parts in their comedic partnership. When the concept is high, sometimes the expectations are, too.