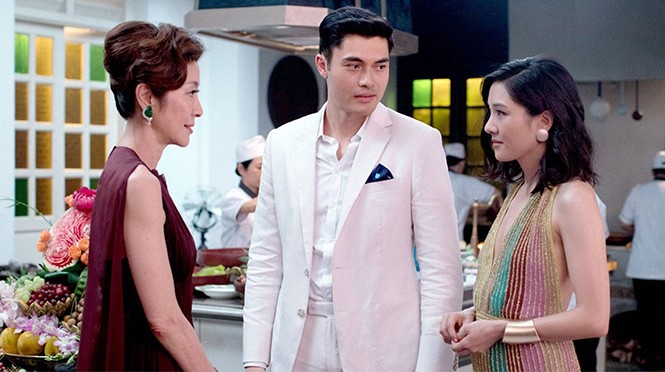 We could begin by pretending it doesn't matter that it's been 25 years since The Joy Luck Club, the last time a major studio released a movie primarily by and about Asians and Asian-Americans—but come on. While China's growing economic power might mean that movies have made incremental improvements in Asian actor representation, mostly to appeal to the Chinese moviegoing market, mainstream movies still generally behave as though America's demographics look the way they did around 1800. So Crazy Rich Asians is kind of a big deal, in the same way it was kind of a big deal for Black Panther to give African-Americans a super-hero who looked like them.

The tricky part becomes what audiences should expect from a multiplex romantic dramedy about Asian characters. Should Crazy Rich Asians be a conventional piece of genre entertainment that just happens to be about Asians? Or should it be a culturally distinctive story where Asian-ness is intrinsic to its appeal? And is it somehow possible to do both?

Director Jon M. Chu (Now You See Me 2) and screenwriters Peter Chiarelli & Adele Lim do a pretty impressive job of balancing those two demands in their adaptation of Kevin Kwan's 2013 novel. It opens in New York, where NYU economics professor Rachel Chu (Constance Wu) has no idea that her boyfriend of a year, Nick Young (Henry Golding), comes from one of the wealthiest families in Singapore. But Rachel learns all about the Youngs when they travel to Singapore to attend the wedding of Nick's best friend, and she discovers that she might not fit in the plans that Nick's mother, Eleanor (Michelle Yeoh), has for her son.

Plenty of familiar genre components come together in this narrative, from the "prince" who keeps his wealth secret so that he'll know if someone loves him just for himself, to the fish-out-of-water comedy, to tales of someone trying awkwardly to please the demanding parent(s) of their significant other. "I feel like a villain in a soap opera," Rachel laments at one point over the perception that she must be a gold-digger, and Crazy Rich Asians certainly traffics in vintage melodrama tropes where a haughty parent tries to thwart a romance because nobody could ever be good enough for their darling child.

But formulas are formulas because they work, and as much as Crazy Rich Asians leans into familiar setups, it generally sticks the landing. Rachel gets the requisite gal-pal sounding board in her nouveau-riche college friend Peik Lin, played by Awkwafina with a perfect sassy spark. Chu's direction brings energy to the visuals, including a lively montage conveying the rapid spread of Nick's romantic status via the Singaporean social-media gossip tree, and sells opulent lifestyle porn with a breeziness that would make Nancy Meyers take notice. He also nails simpler moments, like a tense conversation between Rachel and Eleanor on a staircase in which the grand dame makes sure to get the intimidating upper step.

Yet this is also a story that makes its cultural milieu matter, and not just in its focus on Asian children struggling to reconcile their own desires with familial expectations. From the punch lines—like a contemporary twist on parents guilting their kids at the dinner table over "starving kids in China"—to Eleanor's Bible study group to a trip to a street-food market, Crazy Rich Asians gives this story a unique flavor that captures how this particular culture influences dynamics that might be familiar from a hundred romantic comedies. You might not understand what's going on in a mahjongg game late in the movie, but you can tell that Rachel is applying her knowledge of game theory in a way that matters in the place where she finds herself.

It's a bit of a bummer that the handsome but relatively inexperienced Golding can't match the charming complexity Constance Wu brings to Rachel, making him more of a fantasy figure than a character. There's also a subplot involving the unsteady marriage between Nick's socialite cousin (Gemma Chan) and her insecure husband (Pierre Png) that comes up limp, even if it's meant to suggest what Rachel might face as an outsider among pseudo-royalty. But satisfying wish-fulfillment stories are part of why we go to the movies, and this one delivers—even fulfilling the wish for a story that's as singularly Asian as it is recognizably rom-com.