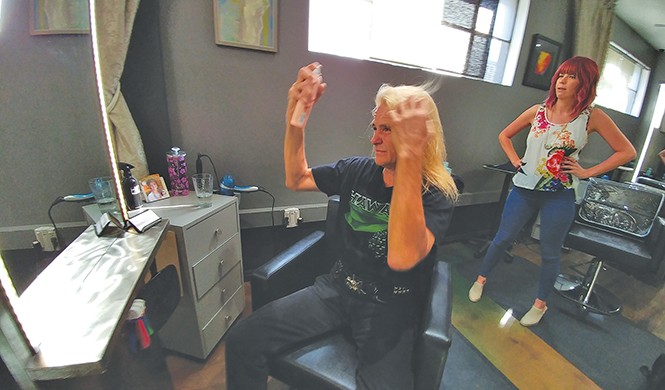 You'd think that Desi Rexx, who fronted underrated '80s glam band D'Molls, would have a phone voice as flashy as his struttin' stage persona. But he sounds clearheaded, mature, responsible—more like a dad than a guy who rocked the Sunset Strip alongside the likes of Motley Crüe and Poison. At his request, we meet at a salon called Unity. He'd dyed his hair brown for a video shoot. Before D'Molls performs with fellow Chicagoans and glam scene vets Enuff Z'Nuff this Friday, he needs to get it back to its usual color: bleach-blond.

In the chair, Rexx's usually fluffy mop is heavy with bluish chemicals. As his stylist, Christie Golightly, shampoos them away, Rexx spins a story about seeing an early version of Aerosmith as a three-piece Rolling Stones cover band with Steven Tyler on drums and vocals at someone's house in Boston. She seems only mildly interested until he's out of the chair. Then, she says her husband knows Desi's music and is jealous—how about a photo? Rexx is happy to oblige, scooping her up in time for the shutter-click.

"I hope this didn't poke you," he tells her, gesturing to the spiky skull belt buckle above his groin. This unintended double-entendre is as close as he gets to the lecherous hair-band stereotype. He hasn't brought up a single conquest or uttered a four-letter word, and proudly proclaims he's never touched a drop of booze.

"I'm LDS," he says later at Crown Burger. He then asks to pause the recorder so he can bless our bacon cheeseburgers. It's only the blessing he wants to keep off-the-record sacred. "It's Salt Lake, isn't it?" he says, implying there's nothing to be ashamed about, being a Mormon in this, The Place. Of course there's not, but it's fascinating to imagine D'Rexx singing D'Molls' "D'Stroll," which is about doin' a groupie.

We don't explore his faith much further; Rexx is a raconteur, given the spontaneous telling of glory-days stories. Here, he tells one whopper of a tale featuring an abundance of candid scenes involving stars like Motley Crüe's Nikki Sixx and SNL alum/Blues Brother Dan Aykroyd (Rexx does a fair impression of Aykroyd saying, "Desi, that's some crunchy rock 'n' roll!"). It dovetails with the Aerosmith yarn, and explains how Rexx helped Cheap Trick reunite with original bassist Tom Petersson. There's a lot more to it, with details and asides that'd cause ecstatic spasms in any music geek, but it's feature-film length. Finally, it resolves to D'Molls.

Formed in the mid-'80s as The Chicago Molls, the band truncated its tag as tribute to the Chicago power-pop band D'Thumbs. In 1985, D'Molls moved to Los Angeles seeking a deal. The band's high-voltage performances won them a contract with Atlantic Records, a slew of fans, a single ("777") in moderate rotation on MTV, and management by David Lee Roth and his handlers. Sadly, the record failed to chart. That, along with intraband conflict, led to D'Molls' original lineup falling apart less than two weeks after a second album, Warped (1990), hit shelves.

Almost immediately, Rexx joined Roth's touring band for a brief run as rhythm guitarist. Afterward, he busied himself with various other projects and attempts at D'Molls reunions, none of which took. In 2007, Rexx reconnected with guitarist S.S. Priest, and they've kept D'Molls alive with various rhythm sections. Six years ago, Rexx married and converted to Mormonism. This led to him moving from Chicago to Centerville, where he lives with his wife and their three children, and works in real estate.

Used copies of D'Moll's out-of-print debut fetch at least $40 online. On the strength of that demand, glam revival label FnA International contacted Rexx in 2011 about doing an album of unreleased D'Molls tracks. At the time, local bass wizard and producer Jonni Lightfoot (Honest Engine, Air Supply) was working with FnA on a reissue from his own old glam band, Skit Skat. The two hit it off, leading to Lightfoot joining D'Molls. Hence, the upcoming show—and imminent new album.

For now, Rexx is keeping a tight lid on details about the new music, but he pulls out his phone and plays one track, "Little Sister." The anthem has all the bombast, hooks and riffs of classic D'Molls tracks, and find's Rexx's voice in top form. He smiles like a proud papa anticipating the birth of a child, only he insists the record has dual paternity. "I wanna say how important that Jonni is to the band," he says. "I couldn't have done this without him."

While it would've been great to see D'Molls realize their potential, Rexx enjoys the best of both worlds, as a family man and a rock star who still has creative juice. He's mindful of his luck in this regard, implying he knows his rocker side verges on childish—but that's how you stay happy. "When I grow up, I wanna be just like my kids," he says. "I keep that in mind and it makes everything go right. If you're not careful, life will steal your smile."