NYC band: Everything & nothing all at once 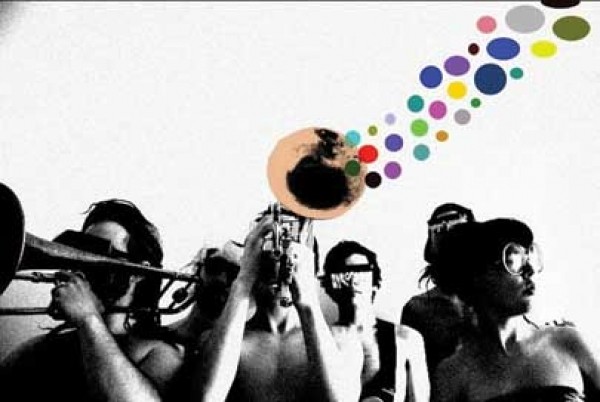 “The purity of human expression and experience is not confined to guitars, to tubes, to turntables, to microchips,” said Bruce Springsteen during the 2012 South by Southwest conference keynote speech. “There is no right way, no pure way, of doing. There is just doing.”

Springsteen’s discourse on the meaning of music was a moving, potent pocket guide through the history of rock & roll, and among some delightful tangents, he insisted that meaningful music comes from all aspects of culture and that its importance is multilayered.

Kalmia Traver, Rubblebucket singer and baritone sax player, was at SXSW, but like many of the 1,000 or so bands, she was performing (or recovering) when Springsteen spoke. So I read the quote to her over the phone. Her gut reaction was that music is bigger than melodies and rhythms—that fans aren’t necessarily always in it for the listen, but for identity creation or a shareable experience.

“Whatever gets people feeling emotions and whatever they use [music] for is fine,” Traver says. “For [Rubblebucket] though, we are very dedicated musicians, and we like the notes.”

The core of the Brooklyn, N.Y.-based eight-piece indie-dance-rock orchestra is couple Traver and trumpet player Alex Toth, who met while studying music at the University of Vermont. They added members after a late-night, multihour improvisational jam at an art opening and party in 2007. Envision the scene, and that founding principle still remains.

Beyond the melodic, bouncy, sometimes off-kilter tunes, which Traver talks about, Rubblebucket relates to this Springsteen quote because they “just do” many things to connect to their audience, thus creating a fresh, wide-eyed aesthetic.

Take, for instance, the band’s artsy videos. “Down in the Yards” incorporated dancers from New York’s Juilliard School to create a spooky, apocalyptic (read: “Thriller”) vibe. “Came Out of a Lady” has the band members’ heads poking out of a tent that Traver sewed herself to look like a polychromatic womb-like thing that eventually births each person out of an exit point while the sculpture seemingly flies through space.

And those props have made their way to the live show—perhaps the most important dimension of the multifaceted rump shakers. Following their best album to date, Omega La La (2011), Rubblebucket dropped the DVD/CD package Live from Chicago in March 2012, and it depicts the Rubblebucket live experience at its best.

“It’s such a powerful experience when all these people are in it together, sweating and detached from their normal routine. There’s so much power and potential in that moment,” Traver says.

It’s a progression that has evolved since the band started. “I had a vision early on of adding value to the live show, to really give people a take-home experience that they’ll always remember,” Traver says. This includes props like ghost outfits for people to wear and dance with onstage, 8-foot-tall robots and the newest thing, The Love Tunnel.

Imagine indie-rock band of Montreal on a DIY budget, but the irony is that the band wants to direct attention off the stage. “We want people to not be looking at us. We want them to be dancing with their backs turned to us and digging each other,” Traver says.

“I don’t want it to be like in church and say, ‘OK, everyone shake hands with your neighbor,’ although every once in a while, I want to say that,” Traver says with a laugh.

With all of this intention in creating an experience, and writing dancey songs topped with lyrics about, at times, mystical and magical things, Traver has to check herself sometimes. “Introducing people to these themes, and really liberating people, is so important,” she says. “But when I put myself in the context of the world, it’s only art. It’s everything and nothing, all at once.”

Which is right in pace with another take-away Springsteen point: “Treat it like it’s all that we have, and then remember: It’s only rock & roll.”