A devout Mormon and an evangelical street preacher exchange words near Temple Square. Next thing you know, they're dining together on roadkill

In 2007, Bryan Hall was almost finished filming his documentary, Us and Them: Religious Rivalry in America. He still didn't know how to end the film. A devout member of The Church of Jesus Christ of Latter-day Saints, the now-42-year-old from Orem, thought about the protesters on Temple Square. He finally said, "Let's go talk to those crazy street preachers."

There he met the outspoken leader of the street preachers, Ruben Israel, a 53-year-old Whittier, Calif., native who travels around the country to preach the Bible to whomever will listen.

Looking back, Hall recalls, "I imagined two scenarios: One would be a huge argument, which would still work for the ending of the film. But in my heart, I knew it wouldn't be that way. I thought the best ending is one where we can resolve this ridiculousness."

Are you and have you always been active LDS?

Always, and still am. Returned missionary, married in the temple, the works.

What made you cross the line and talk to Ruben Israel?

I had misinterpreted the direction from the pulpit as "Don't ever talk to them," when actually it was "Don't engage in an argument with them." Nevertheless, most Mormons receive that message, which is more heavily weighted, as "Don't talk to them at all." I would be lying if I said I was overly concerned about what was preached from the pulpit the day I went and talked to him. I didn't feel good about my own despising of the conference protesters and having this constant feeling [of contempt] every time I thought of them.

Something was wrong with that outlook, and I thought the only way forward was to confront it. I felt nervous, but also had a certain resolve in that I recognized a tough solution that might bring me peace. When you anticipate the peace, it fuels your courage to go on.

I deeply desired to fix this problem, particularly with Ruben. He, in particular, made me the most angry, and therefore I just knew I had to talk to him. I went up to him and said, "You don't know me, but I've hated you and your people for a long time. I have come to try to fix that today and try to get to know you. I wondered if I could buy you lunch, so we can just talk. He said, "Of course."

It was fantastic. It was that moment in life when you are in high school or junior high and that one boy or girl who you swear is your mortal enemy becomes your best friend. Only I was 34 years old. Ruben was staying in town with half a dozen other people. One of the other street preachers was on a list to get roadkill, and he said, "God has blessed us with a huge elk that was hit on the freeway." They had skinned it and carved it and were going to have a big feast [later that night]. So, my film crew and I met with everyone, and they were feeding us this roadkill elk that was hit earlier in the morning in Parley's Canyon.

It was so unlike anything I do in my normal life that it broke the ice between us 100 times over. They got a kick out of us eating the elk, and we really began to humanize each other. We talked long into the night. We left their place at 1:30 in the morning, talking about how much we had enjoyed hanging out with them, especially Ruben. There were a few moments when it could have gone south, because some of them had bad feelings toward Mormons, and it took a little courage to not engage and not worry about that.

For Ruben, street preaching was trying to preach Jesus in his way, and he didn't seem to have any baggage with that. As a group of people, they were extremely kind. I got to understand them better as fringe members of society, not just as religious people. One of them lived in a rundown place, and we were eating roadkill, and I went from hating them to feeling sorry for them.

Do you find any overlap between your beliefs?

Absolutely. One message that struck me was when he said these words: "If Joseph Smith were alive today, he would be out on the street preaching with me. His entire life embodied the rejection of traditional religion for the sake of a message that was extremely controversial. I disagree with his doctrine, but love that he was willing to take a bullet for his beliefs."

I'd never thought of it that way. The current leadership is very safe. They send messages from behind their desks, from behind a pulpit. They are liked in the world and in the community.

With [LDS Church founder] Joseph Smith, it was different. From a very young age, he was completely at odds with established religion. Street preaching is what the prophets of the Bible did, and that is what Ruben and other street preachers are trying to do.

It was so disruptive in my mind that he was revering Joseph Smith. It made me wonder, then, who am I to say that Ruben is doing something wrong?

Have you ever got him to go to church with you?
Oh, yes. I've invited him, but he lives in California and is only here on conference weekend. One funny story happened regarding Proposition 8 [banning same-sex marriage]. I get a call from Ruben saying he woke up that morning and saw on the news that a group of people was gathering at the Los Angeles Temple in the fall of 2008. This was immediately following the election where Prop 8 was supported in California prior to the courts overturning it.

So with the street preachers being very in favor of traditional marriage, about 30 of them thought they owed the Mormons one and placed themselves between the gates and the crowds at the temple. He said, "I need you to call whoever you need to call, because all of the people who are in the temple today must be afraid to come out. You need to let them know that we are here and they can drive their cars and come out." (The street preachers didn't know that the temple wasn't open on Sunday.)

A few different times, when Ruben has come to Salt Lake City on a Friday night [before conference weekend], he has arrived early enough for me to have dinner with him. I have held small gatherings to have people from my ward meet him. I have talked to his wife on the phone. He does have a congregation in Los Angeles, but his church really is on the street. My film company helped make music for his website. We have become friends.

Do you feel that there are two people—the person who is your friend and the person who protests?
No. This is the most important thing. We view them as protesters. They are street preachers. They don't want to be called protesters. They view themselves as street preachers, and this is their entire ministry. They view themselves as speaking God's word and they go where the crowds are. They aren't here to protest Mormons; they are here to preach to Mormons.

I disagree with their tactics. I think they are ineffective. I've told Ruben this. It's a challenge even for the people they do get to stop and listen. The negativity and feeling like they are being yelled at causes such a deep divide and negative experience. I told him that from a marketing standpoint. I love him and am not offended by it.

How do people react to him when he's preaching?
He's been spit upon, had urine thrown on him. He's a big guy in a big group. But they have pretty sophisticated tactics for protecting themselves. They make sure to have someone filming all the time to protect themselves. They are much more organized and sophisticated than you think. They are intentionally presenting themselves as a ragtag group of chaotic idiots, but they leave with a number of contacts to send Bibles to. In their minds, they feel like they are getting through. They joke that they are part of the body of Christ, and they just might be the armpit. 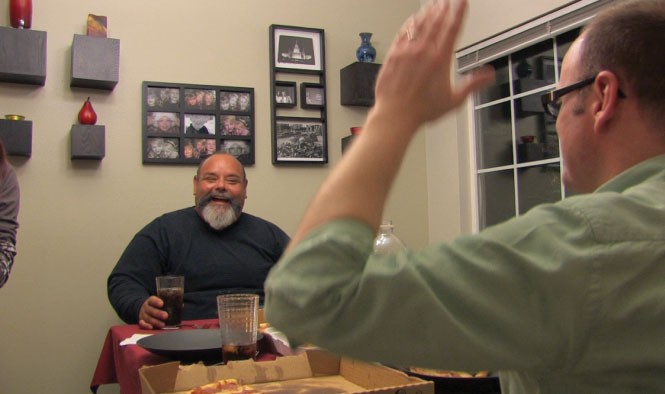 Has anything he said to you changed you?
I grew up believing that these people were inherently evil and part of Satan's host. I know now that it is definitely not the case. My friendship with him has liberated me from a false idea that they were evil, or that they were fighting against God's will. I know that this not the case. I know they are preaching their message. Having that belief is a lot healthier than believing they are part of Satan's army. He doesn't make a lot of money. Every ounce of money he makes, he puts into his ministry. He and his wife have lived a very modest life. He graduated a kid from UCLA. He has raised a family and spends all of his extra money on this message. He believes that when he dies, he will be rewarded for his sacrifice.

Has there ever been a falling-out in your friendship?
Once we got through the first part, nothing else was shocking. I do believe I have had an effect in one area: Ruben has these gimmicks. He drilled a hole through a Book of Mormon and dragged it around. I told him we are not like Muslims in this regard. It's just a piece of paper.

Also, through some backchannel means, he got some garments from an ex-Mormon. He tied them on a stick and was waving them around. Unfortunately for him, it just looked like a white cloth, and people didn't notice. It looked like a surrender flag.

It would stir so much hate. He said, "That is just your crazy underwear." I told him the garments are something very sacred, and we don't reveal the oath and covenant. Mormons are a very conservative, modest people. It's like asking an Amish person to buy an iPhone. I have noticed that he always shares the banners and stuff that they create for each event, but since we had that conversation, he's never brought up the garments.

What happens when you get together?
During conference time, Ruben and I regularly meet, and then each go in our own directions. [Israel goes to street preach or protest, and Hall goes to conference.] Because my father-in-law is a stake president, we usually have some kind of tickets. We usually have time to spend with the family or Ruben, then we go our separate ways and meet up afterwards.

He usually arrives on Friday and leaves on Monday morning. He'll stay at our house and get up very early to meet up with other friends who have traveled in. They'll go and stake out the ground at about 5 a.m. Especially when the weather is bad, we do try to organize to bring them breakfast or lunch, so they can keep their place. We'll coordinate efforts to drop off hot chocolate or donuts or lunch to them. Sometimes we just shower them with a bunch of food.

He has definitely had more conversations since the movie came out. It's more effective to have a movie that shows you as a lovable, big teddy bear. In New York, on my mission, I did street preaching, and you would make contacts and get way more traction that way. I can't deny that method works. I still think he could do his preaching and just not be as abrasive and be way more effective.