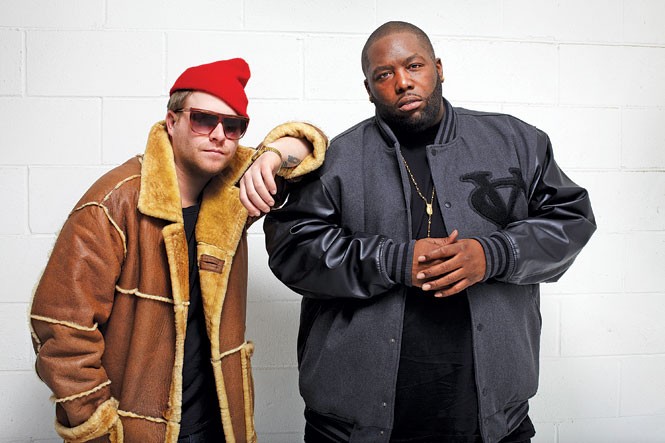 It seems the best one-two punches always come from rap duos who are willing to forego gimmicks, arrogance and braggadocio for greater art. When everything aligns just right, a good rap duo is capable of transforming the archaic into something simple, fresh and clean, like a crisp pair of laceless, shell-toed Adidas.

Though albums like Timbaland & Magoo's Indecent Proposal argue that this method often falls flat, countless gems from Eric B. & Rakim, Madvillain and Gang Starr suggest that the correct blend of compromise, collaboration and ego-checks often yield historic payoffs. No duo currently gripping mics understand this delicate relationship better than Michael Render and Jaime Meline, aka Killer Mike and El-P, who perform as Run the Jewels.

Their 2013 self-titled album is a 10-track blitz of high-energy, stick-up-kid anthems. There are no R&B hooks, no love letters, just raw rap music—the type of shit you bench-press 200 pounds of steak to. On the opening track, El-P sets up fans for exactly what they have in store: "Oh dear, what the fuck have we here?/ These motherfuckers all thorn no rose/ Egads what a bad dream better not sleep/ Take a NoDoz, do some blow." In other words, Killer Mike and El-P made an album so goddamned good, so goddamned scary, that you should pop some pills, blow some lines, do whatever it takes to not sleep on the two killers, who are about to jump into your dreams like Freddy Krueger.

Released as a free download by Fool's Gold Records, Run the Jewels was a massive critical success and was heralded as one of the best hip-hop albums of 2013, scoring a higher Metacritic rating than even Yeezus.

But what was probably its biggest accomplishment came in the form of head nods from Killer Mike's mentors, Outkast. The legendary East Point, Ga., duo gave Killer Mike his first shot in 2000, placing him on the Stankoniatrack "Snappin & Trappin." And in 2013, Big Boi phoned Killer Mike to congratulate the fellow Dungeon Family rapper on the success of Run the Jewels.

"Big Boi and I talk a lot," Killer Mike said in a recent phone interview. "And I remember him calling me one day, and he was like, 'Man, that was all I was trying to tell 'em.'"

But even with endorsements from one of hip-hop's greatest groups, rap critics love to postulate that Killer Mike and El-P make for a strange, unlikely pairing. On the surface, this argument holds some weight—barely. Sure, El-P is a Brooklyn-based emcee/producer known for post-future tangents full of tinfoil-hat conspiracies, and yeah, Killer Mike bleeds Southern hip-hop harder than strip clubs and revival preachers. But this debate is lazy. If anything, it's this very yin & yang relationship that allows Killer Mike and El-P to complement each other so well.

"The whole thing happened with Mike and I very serendipitously," El-P says. "We both happened to be at the right time in our lives to be open to that sort of thing for it to make sense, and that's how it had to happen. We had to have our history in order to have our futures."

The two first got together after a chance meeting at Adult Swim's Williams Street studio in Atlanta while working on Killer Mike's 2012 album, R.A.P. Music. After Mike spent the afternoon with El-P, the two realized they had something special. El-P went on to produce the entirety of R.A.P. Music, and Killer Mike later jumped on a verse for El-P's "Tougher Colder Killer" off the album Cancer 4 Cure. Both albums were considered "bests" of 2012.

"I told El, back when we did R.A.P. Music, 'This is the album I've been always trying to make,'" Killer Mike says. "I love [my first album] Monster; audience members of mine say it's a classic record. I don't want to disrespect my fans like I don't like it or nothing. Nah, I love the record. But there are times in the last three years, where I have sat and imagined to myself, 'What if El-P would have produced my first baby?' So, I'm never gonna take working with El for granted."

Thankfully, these two will be making records for some time, and Run the Jewels' appropriately named sequel, Run the Jewels 2, is slated for a late-summer release.

"This whole shit is just finding out what we're going to be in the next 10 years," El-P says. " You know, we'll work together forever."

Mike laughs over the phone and agrees. "Oh, you know it, man. El make them beats, man. Y'all know that boy has some beats."