Could the energy expended in gyms be harnessed? 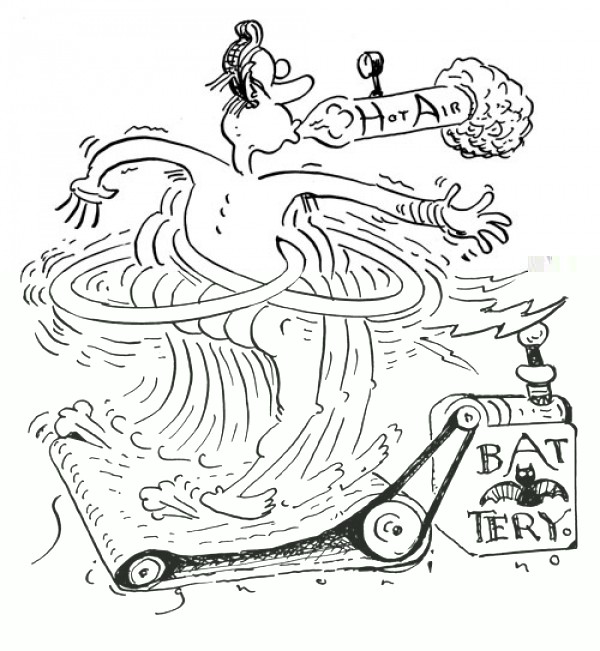 After working out recently, I was gloating about how hard I’d pushed myself and that I “bullied some iron.” That got me thinking: Could the energy expended in gyms be harnessed? Couldn’t we collect the energy exerted on treadmills, rowing machines, and weights to power the place? For that matter, couldn’t we harness the energy from all the gyms in the vicinity to power the town? —Lee Armour, Glasgow

Sure, Lee, we could do that. The only trouble is, as with so much first-world thinking, we’d be accelerating the heat death of the universe.

Let me illustrate. I have here a paper entitled “Harnessing Human Power for Alternative Energy in Fitness Facilities: A Case Study,” evidently prepared by three UC Berkeley undergraduates for a 2010 sustainability conference. This idealistic trio had the same thought as you, Lee: If we could harness the energy expended in a gym, in this case on the 28 elliptical exercise machines at the Berkeley campus’s Recreational Sports Facility (RSF), we could make this a better world.

This proved to be problematic, as the following statistics from the paper suggest:

Others looking into this question have come up with equally discouraging results. In a 2011 IEEE Spectrum article titled “Turning Sweat into Watts,” Tom Gibson points out that powering one average American home for a year would require 4,600 people to each pedal a properly equipped exercise bike for 24 hours straight. Powering the entire United States for a year would require everyone on Earth to pedal nonstop for 7 1/2 months.

The Berkeley authors spin this unpromising fact set as best they can. “Many of the recreational facilities that have retrofitted exercise equipment to harness human power have claimed to do so not for economic benefits but for social ones,” they write. “Demonstrating that people can accomplish something while taking time off their schedule to stay fit has made many patrons happy.”

In other words, the point isn’t to actually achieve anything tangible, but to make our fellow one-percenters (in global terms) feel good. Isn’t that a bit silly? Of course. But if we stop there we haven’t fully grasped the nature of the problem.

Not to go all environmentalist on you, but working out is inherently energy-intensive, typical of how we do things in the developed world. We consume more food energy than we need, burn off the excess calories via exercise, then discard the work thus produced (iron bullied, treadmills trod, etc). Sure, we can try to capture some of that wasted work, but even if we ignore the practical problems encountered by the Berkeley authors, the second law of thermodynamics tells us these efforts are inevitably doomed—however many watts we can recover from that exercise-bike-driven generator, the food energy we had to consume in the first place is always more. In short, by the mere act of working out, we’re burning through resources faster, increasing entropy and hastening the universe’s demise.

You’re now thinking: I shouldn’t exercise at all. I should just stay in bed.

Nah. Eventually, the cosmos will sputter out regardless; no reason we shouldn’t dissipate some energy getting buff till it does. However, we don’t want to be frivolous about it. For example, rather than hooking up a generator to an exercise bike—a wasteful proposition any way you look at it—it’d be better to ride a bike to work, thereby killing two birds (exercising, commuting) with one stone.

You say you absolutely must have high-tech gym equipment? Then at least use the self-powered kind. Of the 1.45 million kilowatt-hours used by the Berkeley gym in 2008-’09, around 87 percent went toward heat, lighting, and ventilation; nearly all the rest—229,000 kilowatt-hours, by my calculation—was used to power the treadmills, by far the most inefficient type of cardio apparatus. People, please. You’re in fricking California. Go outside and run.