String Sleigh-er: Deck the halls with Ryan Shupe & the Rubberband. 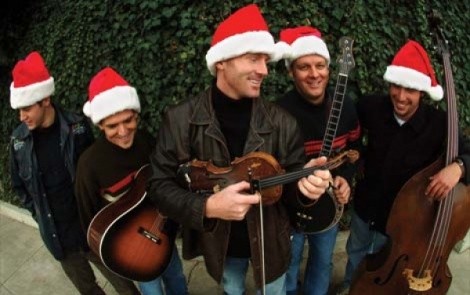 While Santa’s midnight merriment is led by a red-nosed reindeer, his musical melange is carried out by a bald 39-year-old Provo resident and a troupe of high-energy multi-instrumentalists.

The fifth generation violinist—who also plays guitar and sings—hit it big in 2005 with “Dream Big,” which made the Billboard Top 40 Hot Country Songs chart. Critics raved that the Rubberband would be Utah’s next big pop hit, after The Osmonds and SheDaisy. Accolades and attention settled down, but Shupe’s still churning out positive tunes, like those filling the 2009 release Brand New Shoes.

“I’m just passionate about playing and making music ... combining all these acoustic instruments and pushing them into different genres,” Shupe says. Singles like “Banjo Boy” capture this difficult-to-categorize style that he’s deemed “PostHee-HawFunkadelicHipHopNewGrass.” That’s a mouthful, and his music is an earful: Its easy-to-decipher message is contrasted by rich instrumentation.

Prior to “Dream Big,” Shupe and the Rubberband were mashing up holiday classics on the 2002 release The Gift (re-released in 2009 with additional tracks, including “Away in a Manger”), albeit to lesser extremes than his original stuff.

“There’s only so far you can take ‘What Child is This.’ I don’t know if we’ve ever wanted to deviate too far away from the spirit of [Christmas music],” Shupe says. However, “Drummer Boy” has a jazzy, “weird beatnik” feel, while “Rudolph the Red Nosed Reindeer” evokes an island vibe.

Their holiday show pulls from this repertoire, but to give it a more uptempo feel, they’ve created several additional holiday renditions; for example, “The Devil Went Down to Georgia” has become “The Grinch Went Down to Whoville.” Also, Shupe’s catchy tune “The Corn Dog Song” is turned into “The Eggnog Song.” “Eggnog is kinda like a corn dog because no one knows what’s in [either] and both are decently good,” Shupe jokes.

However, he knew they needed more than just holiday tunes for a memorable Christmas concert. “When we were trying to come up with a Christmas show, we wanted to create an original storyline,” Shupe says. “We started realizing that Christmas was a different time and people wanted something a little different from our regular shows,” which are known as high-energy jamfests. The outcome is about 80 percent music and 20 percent story, including dialogue and film.

Each character/band member has a secret Christmas wish; for example: Guitarist Roger Archibald wants to be like Guns n’ Roses guitarist Slash, in dress and mannerism; Shupe wants hair like model Fabio because he’s bald, etc. They give each other presents on stage, but it’s not what each wants—the audience knows this because of the accompanying video—which is endearingly funny. It’s definitely a feel-good evening. “Overall, there’s a celebratory feel to this show. It’s such a good time of year ... it really gets me in the holiday spirit,” Shupe says.

Shupe’s real-life holiday wish will come true this year when his family gets together for their traditional jam session that he grew up with since age 5.

“My grandma would always have a jam on Christmas Eve. Every family down the line would prepare songs,” Shupe says. “It was just a giant show that was so awesome; you’d hear all these fiddles going crazy.” Afterwards, a large portion of the family would go caroling in the neighborhood, performing a musical program they had created, Shupe says.

It seems he’s always had a knack from crafting family-friendly Christmas programs.