Find all your Central American favorites at Sabor Latino. 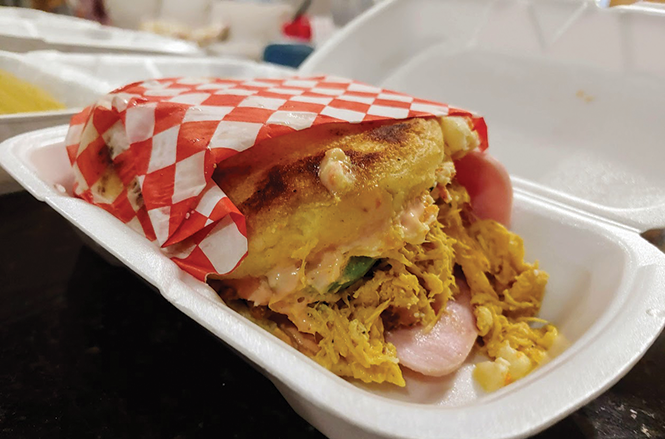 Considering the wide variety of areperias, pupuserias and empanaderias that I have visited and subsequently fallen in love with, I'm amazed that I didn't discover Sabor Latino (multiple locations, saborlatinoutah.com) earlier. It was only when I got wind that this local Latino restaurant opened a second location on North Temple (2080 W. North Temple, 801-364-0885) that I realized there was a place—two places, if you count their original South Salt Lake location (3053 S. State Street, Ste. 1, 801-487-2009)—where all of my Central American favorites can be found under one roof.

As I perused their menu that features traditional favorites from Venezuela, Colombia, Mexico and Guatemala, I was hit with an initial wave of skepticism. I've been to a few alleged one-stop shops that try to cast a wide net and yank in dishes from multiple culinary biomes. Usually this strategy creates a diverse menu, but one filled with mediocrity—which is always a shame when so many niche restaurants that only make four things are absolutely killing it right now.

To test Sabor Latino's resolve, I decided to try out a few things from each section of its sprawling menu. I ended up coming home with enough food to share with my neighbors, who were also grateful for a deep dive into what makes this all-star lineup of Latino flavors tick.

I kicked this experiment off with an arepa mixta ($7.99), out of respect to my most beloved of Central American sandwiches. It definitely looked the part of a traditional arepa—a grilled cornmeal exterior stuffed beyond all reason with shredded beef, ham, chicken and avocado—which is almost as important as the taste itself. After hefting the unwieldy monster, my first bite was filled with the flavors of tender, marinated meat and creamy avocado. While I can't say it's the best arepa I've ever had, it was far from mediocre. All of its primary flavors landed at precisely the right time, and it left my hands a gloppy mess, which is the trademark of a decent arepa. At this point, it was safe to say that I was intrigued.

From here, I endeavored to explore Sabor Latino's take on some of the cheese-and-meat-stuffed sideliners from the world of Central American cuisine. The pupusas revueltas ($2.59) and loroco ($2.59) are solid representations of this classic; I was particularly fond of how much buttery Oaxacan cheese was stuffed inside. Their tamales de elote ($4.99), which share their name with the grilled corn cobs famous in the Central American street food scene, were a variation on tamales that I had yet to try. Where most tamales are filled with shredded meat, these plump, steamed-to-perfection tamales let the sweet corn masa occupy the spotlight, and it's a lovely dining experience. The soft texture and subtle sweetness are staunch reminders of what makes tamales special.

For the ultimate exploration of deep-fried dough stuffed with meats and cheeses, the pasaplos mixtos ($10.99) is all one really needs. It's a basket filled with chicken pastelitos, beef empanaditas and cheese tequeños, and it just might be the all-time best appetizer ever created. Each item brings its own flourish to the basket, and there's not a sour note to be found. Even the shredded chicken inside the ravioli-shaped pastelitos, which can usually be a bit of a throwaway, brings some smoky marinated flavors to the party. Pairing this with some of Sabor Latino's salsa varieties or their avocado crema was the unexpected hero of my visit.

To round out the grand experiment, it was time to try something that was both unfamiliar to me and touted by the restaurant to be a fan favorite. By this, I of course mean the bandeja paisa ($19.99), a fascinating arrangement of meats like carne asada, Colombian sausage and a crisp chicharron pork rind with rice, beans, plantains, avocado and a goddamn fried egg to top it all off. Hefting it into my car, I swore the thing weighed about twelve pounds. I have seen some insane food piles in my day, dear reader, but attacking this cyclopean mélange solo is an exercise in futility—unless you're planning on living off of leftovers for the next few days. The impact of this dish lies in its sheer volume, but the method to this madness is clear once you attempt to make a dent in it. Slicing the fried egg open adds that silky yolk texture to the beans, creating a divine gravy with which to slather all those proteins, while the plantain hangs out to provide a shot of starchy sweetness to even out the palate.

After a tasty meditation upon the different cultures and cuisines that I had just experienced thanks to Sabor Latino, it's clear that there is no wide net of mediocrity cast here. It's impressive to see how well this restaurant embodies its mission to serve up traditional favorites from all over Latin America, and even more so once you taste how delicious everything is.