How an Idaho Nez Perce tribe got its valuable collection of artifacts back. 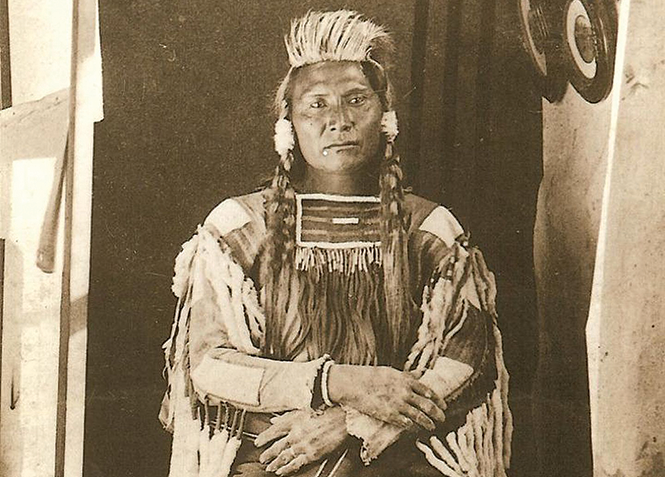 The first photograph ever taken of Chief Joseph was after a 400-mile forced march through Montana following the Nez Perce surrender at Bear Paw in 1877.

Joseph sits tall, with a straightforward gaze. He wears a blue-beaded buckskin shirt. Today, that shirt is owned by billionaire and collector William Koch, who bought it in a Reno, Nevada, art auction for $877,500 in 2012.

For Native Americans, the sale of Chief Joseph's shirt is "like someone else trying to sell the Liberty Bell," said Trevor J. Bond, associate dean for digital initiatives and special collections at Washington State University.

But even that comparison can't fully describe the meaning Native American artifacts from the past have for the descendants of those they belonged to, nor their struggle to reclaim them.

The fate of Chief Joseph's shirt—sold to the highest bidder, bound for a private collection or behind glass in a distant museum—was nearly the fate of the Spalding-Allen Collection. The assortment of Nez Perce items has been cited as the earliest documented Native American artifacts from a specific time period in Plateau Indian history.

"You can't really think of it in terms of the way modern people think of clothing or heirlooms. It has a much deeper meaning to us," said Nakia Williamson-Cloud, director of the Nez Perce Tribe's cultural resources program. "These are living pieces amongst our community. They have a life in the community."

The tribe faced nearly overwhelming odds to get the Spalding-Allen Collection back. It took a public campaign, with everyone from school children to national celebrities contributing, to bring it home.

Severing Past from Present
As America's Indigenous peoples were forcibly removed from their homelands, settlers collected the remnants of their lives, everything from baskets and moccasins to skulls severed from bodies in ancient burial grounds. They were called curiosities and relics and were bartered, sold, studied and put on display. Because white settlers viewed their culture as superior, Native beliefs and customs were rarely considered. 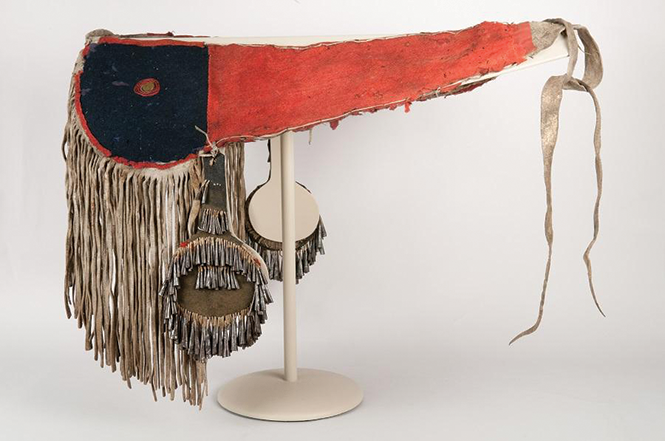 "A lot of the collections came to be at that point in time where there was the thought across the nation, especially in the institutions of higher learning, that we were no longer going to be here. That was the beginning of anthropology in the U.S.; let's document these people because they're not going to be here in another 100 years," Williamson-Cloud said.

Williamson-Cloud's work with the tribe includes the repatriation of remains. He was part of Plateau tribes' efforts to reclaim the 9,000-year-old body of the person scientists named the Kennewick Man. Tribes called him The Ancient One and reburied him in 2017, after a 20-year legal battle with scientists.

Scientists and officials at other institutions, like museums, often draw lines between the people of the past and the people of today, he said. "All of this is wrapped up together; that's our experience as a people."

The Spalding-Allen Collection came together during work to split the Nez Perce people from their traditional ways of life. It was collected by Presbyterian missionary Henry Spalding, who arrived in the Lapwai area in 1836 to convert the Nez Perce to Christianity. In 1846, Spalding shipped an array of Nez Perce clothing, accessories and horse gear to a supporter, Dr. Dudley Allen of Kinsman, Ohio, in exchange for materials for his mission.

Trevor Bond began researching the collection's journey in 2009, as part of a dissertation on the ethics of acquiring, curating and selling Native American cultural history.

"The big question is, who really owns collections like this, especially when the circumstances of the collection being established were problematic?" said Bond, author of the forthcoming book, Coming Home: The Campaign of the Nez Perce Tribe to Repatriate the Spalding-Allen Collection, to be published by WSU Press. 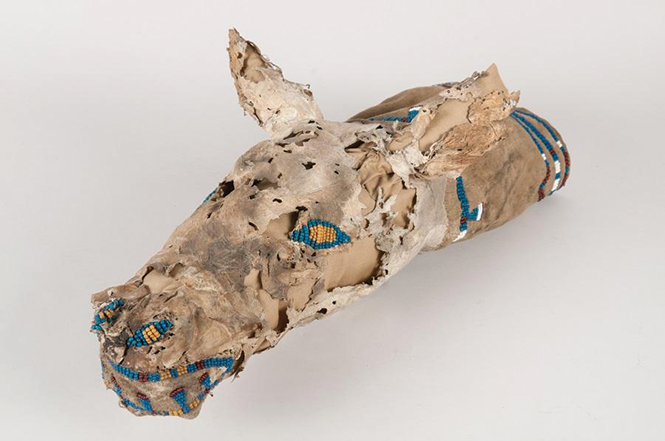 "The real rub with some members of the tribe is that Spalding is gathering these things up at the same time he's telling Nez Perce they need to stop wearing traditional clothing, cut their hair, stop their seasonal rounds, farm and become like European Americans. It's a bit of hypocrisy there in that he's saying these Native customs are bad and yet is taking this magnificent material culture and shipping it off across the country."

Whether or not Spalding was given the items, traded for them or paid for them is one of the questions asked in a discussion on ethical collecting. In a letter to Allen, Spalding gives an estimated value of each item so that Dudley can send the same amount in goods back, Bond said. He does not say how he acquired them.

"It's pretty laughable to think he actually paid for them," said Williamson-Cloud. Spalding strongly disapproved of Nez Perce material culture. Based on Nez Perce knowledge, he was burning traditional clothing at the time. "You can bet he was condemning those things to the original owners."

Ironically, Spalding "inadvertently and almost naively preserved these items when a lot of other items from this time period have fallen by the wayside."

The items remained in Allen's home for decades, until his son donated them to Oberlin College, which loaned them to the Ohio Historical Society in 1942 for safekeeping. They were never put on display there. Nez Perce National Historical Park curators discovered the collection's existence in 1976. After negotiations, the society agreed to loan most of the collection to the park service for renewable one-year time periods, which brought it back to the tribe in Idaho, at least temporarily.

Believing that if the collection was returned to Ohio it would be sold to a private collector and never seen again, the tribe agreed. After negotiations, the campaign kicked off January 1996. 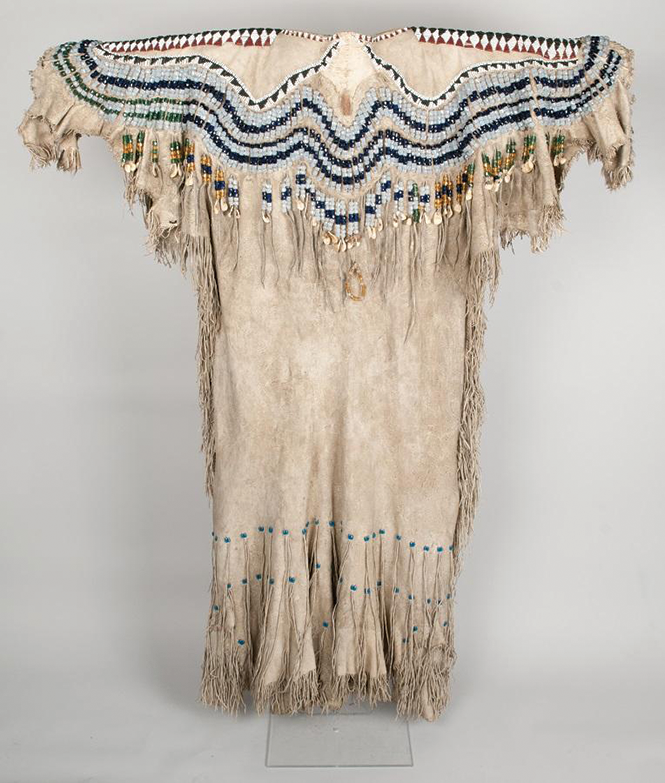 A Living Record
A woman's soft, white elk-hide dress detailed with dentalium shells, glass beads and elk teeth is among the items in the Spalding-Allen Collection.

The decorations signified family symbols or trademarks that held "special meaning" to the makers, according to remarks by Allen Slickpoo Sr. in 1995. The dress was not an everyday garment but was made exclusively for special occasions. It was sacred. The fine fringe on the dress shows its age, noted Linda Paisano in another remark. Fringe could only be cut that thin with obsidian. Contemporary dresses made today with scissors cannot duplicate it. Their comments are included with photos of the collection, which can be viewed online at the Plateau Peoples' Web Portal.

The dress is more than an heirloom or a work of handicraft. It's a living record, said Williamson-Cloud.

"The reason we carry on with, to some on the outside, outdated things and ways, is there's a value that's there in the importance of those items that were passed down by the elders."

"The second one to stand up for us was the deer. He would provide meat and clothing. We had nothing, nothing to protect ourselves. The deer and the other ungulates, bighorn sheep, elk—that was their sacrifice to us," he said. "Something as simple as a buckskin dress reaffirms our identity, our lineage, our connection to the land and how it is connected to us. It is a reciprocal relationship to us." 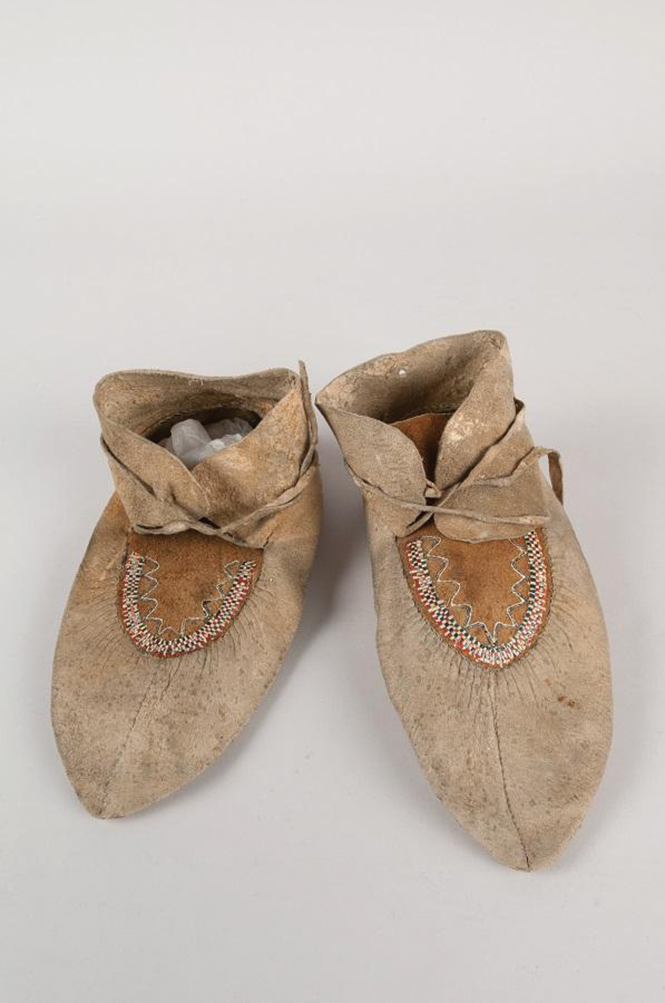 Items were handed down through successive generations as a representation of lineage, commitment and responsibility, he said. Because the tribe did not have a written language, its members used these things as a way to recite and remember their family, tribal and inner-tribal relationships and stories. They have a life of their own.

"Once they're curated, filed away in a box, put on display, they lose a little of that sometimes. If they're in the area, they're in the context of all this broader understanding I'm trying to relate."

This give-and-take relationship with the land is Nez Perce culture, said Williamson-Cloud. This is one reason the Nez Perce have fought to protect the environment and their right to fish, hunt and gather. "We're not trying to preserve the land and resources for the sake of doing it, we're preserving ourselves and our unique identity."

For generations, Native people have been told that everything they knew has no value anymore, he said.

"The broader society can't even conceptualize what that is like. I think other minority groups understand it, though. That's why things are happening the way they are right now."

Museums have played a role in this by collecting and preserving items for Indigenous cultures with no buy-in from the people they are representing. 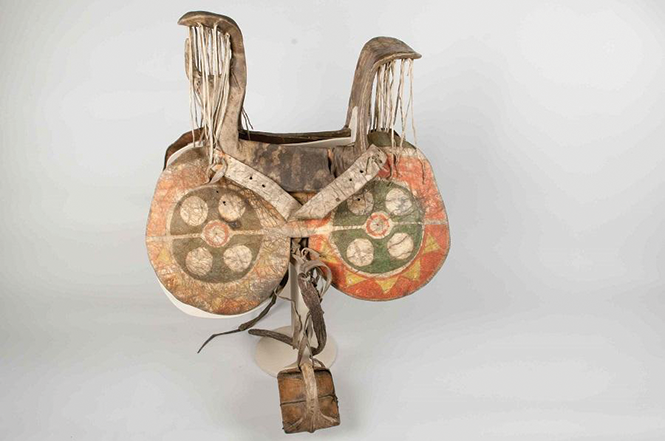 Righting History
Raising $608,100 in six months seemed impossible to many.

The tribe and the Nez Perce National Historical Park signed an agreement in which the tribe took the lead in fundraising efforts while the park service provided support, Bond said. An economic development strategist, Tom Hudson of Moscow, Idaho, was hired to lead fundraising. They created one of the first websites with various groups sponsoring different items in the collection. Hudson came up with the idea of asking classrooms across America to pledge $57.90, the amount Spalding gave to Dudley as an estimate of the item's value. The campaign soon gained national attention.

"It was a pretty big movement. That was a pretty neat thing for the tribe and the community," said Williamson-Cloud, who, at the time, was a student intern at the park where he made detailed technical drawings of the collection in case the tribe lost possession.

The shipping crates were set up when, a few hours before the deadline, they reached the goal.

Afterward, Hudson told the Lewiston Tribune the odds of raising that much money in time had seemed insurmountable. 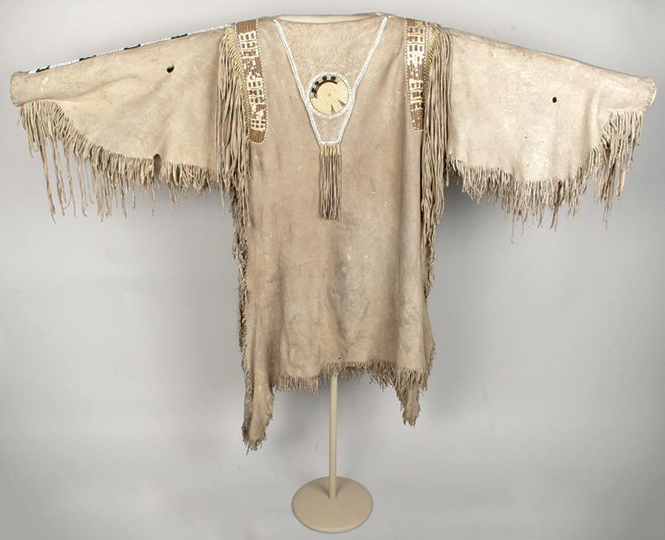 His motivation, and the motivation of a lot of people, was "to right a wrong," Hudson told the newspaper. "Many people were outraged that the tribe should have to pay to get back their own historical artifacts."

"To have those garments survive and be away from home for so long and then come back is just very powerful," said Bond. "I think it shows (the Nez Perce) savvy and dynamic advocacy for doing what's right and protecting their culture and history."

"The items themselves just have this energy and power that comes out, especially when people are talking about it and engaging with the collection. It kind of brings chills, this energy. It goes back to how important it is for these items to be with the communities," Bond said.

"By and large, thousands of Americans agreed they belonged to the tribe and that they should stay in Idaho." cw 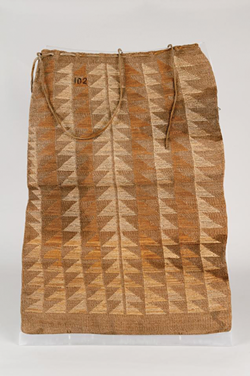 If You Go
What: Items from the Spalding-Allen Collection
Where: Nez Perce National Historical Park Visitor Center at Spalding, 39063 U.S. Highway 95, Lapwai, Idaho
When: Temporarily closed due to COVID, but when reopen, the hours are 8:30 a.m. to 4 p.m. daily
For center updates, visit: nps.gov/nepe/planyourvisit/conditions.htm
Of note: Items from the Spalding-Allen collection can be viewed online at: plateauportal.libraries.wsu.edu/collections

Jennifer K. Bauer is the editor of Inland 360, a weekly culture magazine for north Idaho and eastern Washington, where this article first appeared in the August 12, 2020.