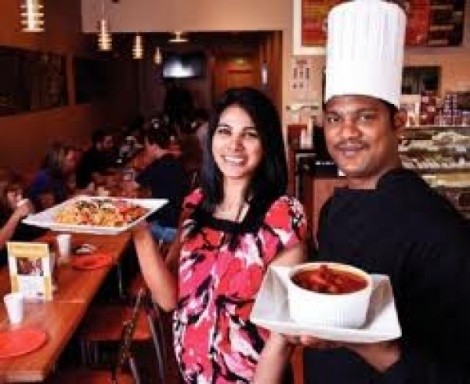 Dosas @ Saffron Valley
Tuesday nights are now dedicated to dosas at Saffron Valley Indian Street Foods (1098 W. South Jordan Parkway) restaurant in South Jordan. Dosas are crispy lentil-and-rice crepes that can be stuffed with fillings and partnered with sauces to make a complete, delicious meal. Well, now on Tuesday nights, you can enjoy all the dosas you can eat for $9.99. Saffron Valley owner/manager Lavanya Mahate says, “Every foodie worth his or her saffron knows the local Indian joint to frequent for a dosa fix.” That joint is Saffron Valley. Dosa flavors featured on the Dosa Night menu include plain, ghee, onion, podi, masala, mysore masala, pesarattu (moong), onion pesarattu, madurai malli (mint), cheese, spicy chili, onion-chili utappam, vegetable utappam and a spring dosa with vegetables. For reservations, phone 801-438-4823.

Utah’s “Good Food” Finalists
Congratulations to Salt Lake City’s Creminelli Fine Meats and Orem’s Amano Artisan Chocolate; both have been named as finalists in the 2012 Good Food Awards competition, recognizing the best American food producers. Creminelli is a finalist in the charcuterie category for its Bresaola, Piccolo and Finocchiona Salami, and Amano is nominated for its Guayas chocolate bar. Winners will be announced during ceremonies in San Francisco on Jan. 14.

Quote of the week: Eternity: two people and a ham. —Dorothy Parker