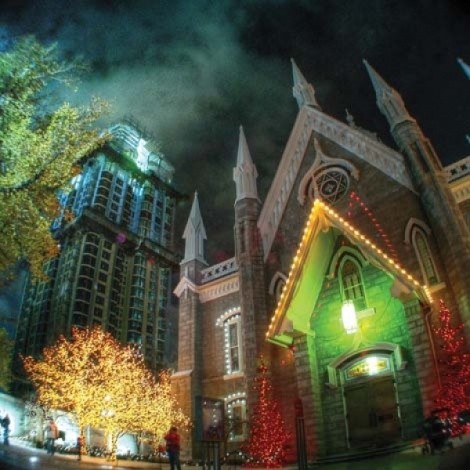 Salt Lake City neighborhoods have a rich history behind them going back to the 19th century. The city’s little pockets, while historic, are also constantly evolving, particularly now, as various capital projects and developments move toward completion.

Defining what exactly is a “neighborhood” depends on whom you ask. But it comes down to hubs where people come together. And what brings people together are shops, diversions, eateries and services—accessible to all Salt Lakers, no matter where they call home.

DOWNTOWN
If there’s one area changing dramatically around the city, it’s downtown. The gigantic City Creek project will be opening in the next couple of years, as will other notable high rises. Quite a few small businesses have been opening along Main and State streets in anticipation. City Creek is a project of the LDS Church, leading some to wonder—just who exactly is going to be taking over in the area?

Babs De Lay, Salt Lake Planning & Zoning Commission chair and principal broker of Urban Utah Homes & Estates, says, “I asked this question of someone not in ‘the brotherhood’ who is working in the City Creek project: Are you expecting families dressed in gingham with eight kids to be living in those condos across from the temple? He said, ‘No’; they were marketing to international business people—like friends of Mitt Romney. These kinds of people would help bring future development and business to Utah.”

Why you should go: It’s the center of the city, for God’s sake. And speaking of that guy, you really should stop by Temple Square (15 E. South Temple, events ticket office: 801-570-0800). Regardless of your religious affiliation, Temple Square is the symbol of this city around the world and has amazing 19th-century architecture built by those who settled this place. Just don’t get suckered into writing your address down while there (unless you actually do want a visit from LDS missionaries). Also, check out Abravanel Hall (123 W. South Temple, 801-323-6800) to hear the Utah Symphony; Capitol Theatre (50 W. 200 South, 801-355-2787) to see Ballet West or a touring Broadway show; or the Rose Wagner Performing Arts Center (138 W. Broadway [300 South], 801-323-6800) for a variety of performances.

BROADWAY
Broadway is becoming the place where urban hipsters and artists congregate. “If you’ve been on gallery stroll,” De Lay says, “you will have noticed that most of the hip artists have moved out of Pierpont, making that an unknown zone of ‘what’s next’ and vacant spaces. The hip artists and steampunks have moved to 300 South between 200 East and 500 East. As long as the city doesn’t interfere, that is a new bustling small business area that’s impacting all of downtown.”

GATEWAY/ GATEWAY SOUTH
Tami Cromar had one very good reason for choosing an old engine repair shop at 770 S. 300 West (801-834-6111) for her My Dough Girl gourmet cookie shop. “I couldn’t afford anything else.” There seemed to be plenty of drawbacks to the choice. The shop hadn’t been touched in 60 years, and it wasn’t close to any other shops. 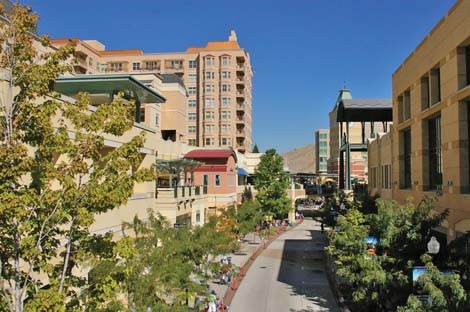 Nevertheless, Cromar opened the business in December 2008. Not only has My Dough Girl thrived, it turns out Cromar may have been riding the crest of a wave that could result in big changes in the blocks south of the Gateway and Pioneer Park, which some are already referring to as it’s own area: the Gateway South. “I think this neighborhood is really up and coming,” she says.

Cromar says a mini-Gateway mall as well as a Super Target are planned for the area, but in the meantime, she’s getting a lot of traffic from busy 300 West, as people are coming in to buy cookie flavors such as chocolate-cinnamon dough with a molten chocolate-mint center or mangoes and dark chocolate in a citrus dough. The cookies are given female names such as Vivianna or Margo and matched up with a 1940s-style pin-up to give each creation its own image.

“We get a lot of traffic from people who are driving back-and-forth between the Gateway and Costco and back,” Cromar notes. “We also got tons of traffic from the Farmers Market. It turned out to be a really great location.” 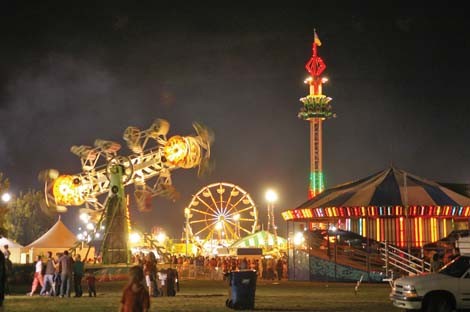 Before the real-estate bubble collapsed, Rose Park was supposed to be the “next big thing” because it’s a residential area near the city center with affordable prices. De Lay continues to see Rose Park as an up-and-coming neighborhood. “It is the cheapest area close to downtown,” she says, “and TRAX will be finished along North Temple and make Rose Park much more accessible and transit-oriented.”

Ron Jarrett, chair of the Rose Park Community Council, says, “I would like to think it is still looking to a bright future. As with most communities right now, we have a number of homes for sale and a few vacant homes just sitting. Perhaps the weeks and months ahead will change that.”

While Jarrett says, “We are mostly a residential neighborhood” that has “very few businesses in our exact area,” he points out, “We are seeing growth all around us.” For example, in the spring, Salt Lake County will open a large recreation center just blocks from the neighborhood. 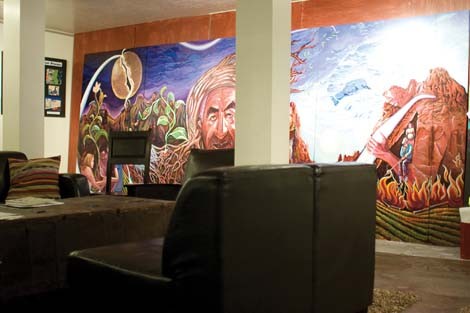 As far as places to visit in the area greater Rose Park area, Jarrett recommends the Red Iguana restaurant (736 W. North Temple, 801-322-1489) and says, “Mestizo’s Coffeehouse (pictured at left, 641 W. North Temple, 801-596-0500) is a good place to have a great cup of coffee or something to eat, plus they are a very strong art influence in the community.”

GLENDALE
If anybody ever tries to tell you Salt Lake City is a homogenous place, just drive them through the Glendale area. From California Avenue to Redwood Road, one can see a United Nations of stores representing the different communities of immigrants that now call Salt Lake City home. From African, Eastern European and Latino to Polynesian and Asian, it can all be found in this section of the city.

The Stahles decided to change the name of the store and the merchandise to focus on the growing Hispanic community in the area. Even though the Stahles couldn’t get anyone to lend them any money to make the changeover, they pulled it off while still managing to keep other members of the community coming to the store.

“It was a classic case where I looked at my customer and saw a need,” Craig says. “Diversity can either be celebrated or decried. We prefer to celebrate it.”

Sue serves as chair of the Mayor’s Business Advisory Board and sees even more changes coming to the neighborhood, saying, “I have a sense there’s something in the air about pulling smaller communities together and bringing life back to the different districts in the city.”

The original offbeat, countercultural, cool neighborhood to live in has been undergoing its own transformation as more and more McMansions invade the upper “Aves,” while other places around town seem to be in the process of becoming “the next Avenues.” Are the “Aves” still as cool?

“The Avenues is still cool,” De Lay maintains. “The upper Avenues have seen some massive new homes in the last decade that are now coming down in price by the hundreds of thousands of dollars each month, affecting all values in the Aves. Salt Lake City is doing some extensive mapping of commercial areas up there in order to amend/change/create new regulations to preserve neighborhood commercial use. Protecting these funky little areas will help keep the neighborhood diverse.”

Why you should go: Take a tour of the Governor’s Mansion (603 E. South Temple, 801-538-1005) and drive around the lower Aves to see many other examples of great architecture from Salt Lake City’s early days. The Cathedral of the Madeleine (331 E. South Temple, 801-328-8941) and First Presbyterian Church