Two political newcomers try to out-experience each other 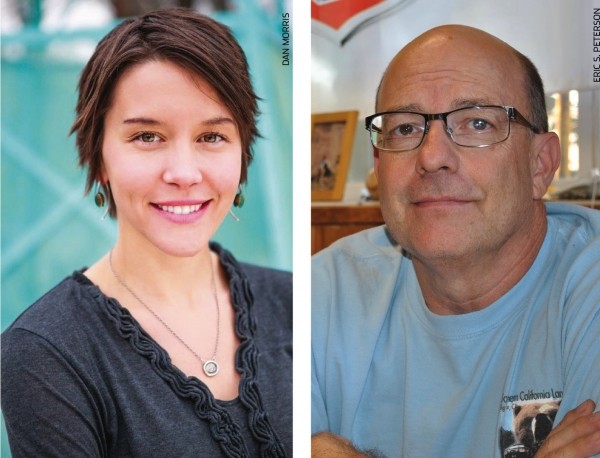 On Nov. 5, people who live between the shores of the Liberty Park pond and the bright lights of Spring Mobile Ballpark will (if they care and if there’s not something really good on TV) go to the polls and cast their vote for a brand-new Salt Lake City Council member to represent District 5.

The contenders vying for the seat held by retiring incumbent Jill Remington Love are both first-timers: quiet activist Erin Mendenhall and small-businessman-about-town Bill Davis. If the primaries are any indication, Mendenhall’s already got a leg up—she nabbed 71 percent of the vote, while Davis came away with 17 percent. But the campaign has really only just begun. City Weekly spoke with Davis, a candidate who makes his own luck, about his secret weapon (and no, it’s not just community involvement), as well as with Mendenhall, a behind-the-scenes activist who told City Weekly about her disturbing love of budget meetings and audits.

As director of nonprofit Breathe Utah, Mendenhall says that a main joy of her work is teaching schoolchildren about air quality. One of the group’s outreach efforts usually involves an air-quality-themed poster contest for students.

“The posters range from showing action-figure guys shooting pollution to really sincere pleadings [for cleaner air] from paintings of kittens and things,” Mendenhall says. While posters are a simple gesture, Mendenhall says there’s much power in subtle shifts of thinking. Even if change doesn’t occur overnight, she sees a lot to be gained through a quiet kind of activism, as when she worked with former Democratic state Senator Ben McAdams in the 2012 legislative session to include information about the effects of idling vehicles on air pollution into the state driver-education curriculum. It was a simple, noncontroversial policy change that will give thousands of new Utah drivers info they can use to help air quality.

“I think work on something like air quality is about taking lots of little steps in that direction,” Mendenhall says.

This is the 33-year-old Mendenhall’s first stab at elected office, though she says she’s already been actively tapped into her community, having organized her local neighborhood-watch program. She also sits on her son’s school community council “because I like the budget side of things rather than the cupcakes and PTA side.”

Her affinity for numbers and planning also extends to the private sector, where she did auditing for an FDA-regulated sterilization company. “I have a knack for finding loopholes and closing them up,” Mendenhall says.

Mendenhall says city-council work would allow her to help sustainably plan the city’s soon-to-be explosive growth by requiring, through ordinance, LEED certification for certain development projects and prioritizing a citywide master transit plan. She also says that her work with Breathe Utah will help her effectively lobby state leaders on behalf of Salt Lake City on air quality and other issues.

“All the success Breathe Utah has found has come about because we work collaboratively and we don’t rally and we don’t protest,” Mendenhall says. While she would like Salt Lake City to help set policies that the state could follow, she also feels air quality is one of the most important local issues for Salt Lake City families.

“I have two young kids, and I want them to grow up here and have Salt Lake City be a place they want to be,” Mendenhall says. “As we look at doubling our population here in the next quarter of a century, the way we grow and the strategic plans we put in place—or don’t—will determine the quality of life here.”
ErinForCouncil.com

He was also on the board of the Liberty Wells Community Council, served four years on the Historic Landmark Commission—including during the Yalecrest-McMansion wars of 2010—as well as serving as a trustee of the Salt Lake Community Network, the umbrella organization for all community councils in the city.

He resigned from those positions to run for office.

“I’m still chair of the Master Plan Amendment Committee for the Ballpark Community Council,” Davis says. “That’s the only thing I haven’t resigned from.” He also has hosted the British Field Day, an annual showing of vintage British cars and motorcycles in Liberty Park, which, Davis says, has raised more than $100,000 for charity over the years.

Davis’ other strength is, he admits, also his weakness: As owner of three local automotive-related businesses on 300 West, he doesn’t have a lot of time to also run a campaign.

Still, he’s hopeful that his experience, especially in small business, will resonate with voters. Davis says small-business owners like himself learn to be innovative when it comes to problem-solving.

“You’re not given a book on how to do things, so you figure out how to do everything, from being the janitor to being the chairman of the board,” Davis says. His creative approach, he says, will help shake up business as usual on the council, as well as help the city nurture small businesses.

Davis is also keenly aware of Salt Lake City’s looming population explosion and wants to plan for the future in a way that walks a planning tightrope: maintaining distinctive neighborhoods and the city’s downtown core while accommodating more medium- and high-density housing. More apartments and condos, he says, would broaden the city’s tax base, thereby keeping residents from being over-taxed.

One idea Davis has long advocated for would be more west-side transit-oriented development. He wants to push for the 900 South freeway offramp—which, he says, takes up prime real estate in its sweep eastward to West Temple—to be taken down. A new offramp would instead lead traffic onto 400 West. Changing the exit, he says, would encourage development on the west side and open up a lot of real estate that currently is either underneath the offramp or right in the ugly shadow of it.

Davis also hopes that voters will appreciate that his desire for elected office will be the end of his political career, and not the beginning.

“There’s nothing wrong with professional politicians, but I think you get a better leader when you have someone who has been very involved in their community in various different aspects and chooses to be a politician at the end of their career, instead of the beginning,” Davis says.
BillDavis4DistricT5.com