A guide to the grid

Most folks who live in Salt Lake City proper are privy to a secret, which is: They live in a place that offers the vitality, accommodations and attractions of a big city—without the hassles.


The 186,000 strong who call Salt Lake City home make up a little patch of liberal "blue" in a conservative "red" state. The up-and-coming, the "arrived," the hipsters, the "cultural creatives," the urban farmers, the 99 percent/protest-minded and assorted crotchety characters—all can easily find a place to call home and to fit in.


Whether you live in a high-rise condo, a traditional apartment, a warehouse loft or a rehabbed historic bungalow, there's no shortage of appeal in terms of residential options. Combine home sweet home with the city's vibrant theater, film, dining, concert and club offerings, and you'll find you're luxuriating in Utah's sweet spot. Shhh, don't tell anyone.


With a downtown ready to rise up and shock the hell out of everyone (by that we mean the new City Creek Center, opening March 2012), a rapid-transit rail system that is the envy of many cities in the West, and cottages on fruit-tree-lined streets where xeriscaping and chicken coops are all the rage, one thing shines through: Salt Lake City is a surprisingly cool place to live or visit. Check out the various 'hoods and let them reveal their charms.


To get your bearings, remember the city is organized along a grid system. Most streets run north to south and east to west, emanating from Temple Square, home to the LDS Salt Lake Temple. Many addresses are coordinates on the grid, for example: 250 East 900 South. That means the actual place you are looking for is located between 200 and 300 East on the street called 900 South. And just to really keep you on your toes, a few streets have retained standard street names, such as State, Main and Broadway. Once you get used to them, the coordinates really do help. 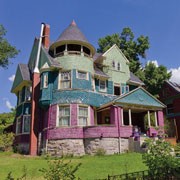 The Avenues
If you're visiting—or better, if you're a Utahn—exploring South Temple is a must. Starting with the iconic LDS Temple followed by the Cathedral of the Madeleine then by the First Presbyterian Church, then by stately mansions and fraternal houses (Kearns Mansion, the Beehive House and Major Downey Mansion are a few), South Temple seems like a microcosm of religious denominations in America. Once you get past the handshakes and free scriptures, however, you'll realize that much of the population living here is a far stretch from the stereotypical Sunday-morning pew-sitters. Demographics in the Avenues (aka the Aves) are well-mixed, relative to neighboring neighborhoods, but, as a rule, WASPishness and wealth increases with each foot gained in altitude.


In the lower Aves, expect to see pedestrians walking their furry companions, sipping lattes and sucking down freshly ground wheatgrass shots. Their environmentally conscious neighbor will cruise by on his gently used mountain bike, and all is good in this 'hood. Dave Van Langeveld, the chair of the Greater Avenues Community Council, says, "There's such a nice mix of young and old, families with children, professional people and blue-collar laborers. [The variety] really enhances the whole area." And, Langeveld points out, the neighbors tend to work together to better their community despite their differences. Look for the vibrantly renovated Memory Grove Park for great views of the Utah Capitol and even a meditation chapel.


The upper echelon of the Greater Avenues community ascends from 11th Avenue and Virginia Street onward. Here, you'll find McMansions (built before the zoning regulations forbade an extra two stories) neighbored by humble view-seeking bungalows made popular in the 1930s. Aside from a few tennis courts and parked Range Rovers, landscapers and lawn-care crews provide the only signs of life on weekdays.
The Avenues: North of South Temple, extending to city limits; east of State Street, extending to city limits

Rose Park
For those looking for a "real yard" at a "real price," Rose Park's fecund soil provides. Over the past decade, this neighborhood has received much-needed TLC—and almost any longtime resident will tell you that it's paid off. One of the largest city investments is the Jordan River Parkway, which has effectively [re]married Rose Park with the rest of Salt Lake City.

Rose Park has certainly had its bouquet of weeds, with a reputation for gang and drug activity, but now you'll find a community blogging about the best perennial flowers, Rose Park Revival meetings and art classes open to the public. In fact, this budding community gets its name from the rose-like layout of the streets. From above, the tree-lined streets form the outline of several roses, with American Beauty Drive acting as the stem (be imaginative). Many of these street petals reflect the gusto of post-World War II, when much of the neighborhood was developed to accommodate returning vets and their families: big yards with room to grow, and Frank Lloyd Wright's name imprinted on most classic homes. As Salt Lake City's up-and-coming neighborhood (not to mention its highly affordable living and close proximity to downtown), it's no surprise that locals and newcomers are planting roots in this fertile community.
Rose Park: West of Interstate 15 to Redwood Road; north of 600 North, extending to city limits 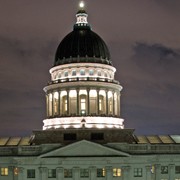 Capitol Hill
Residents of Capitol Hill, one of the city's oldest neighborhoods, boast of homes with diverse architectural styles that line the steep, curved streets. Here you can see an array of Pride flags and assorted "granola" banners waving in the breeze, kitty-corner to the 19th Ward Chapel, now occupied by the Salt Lake Acting Company, with a funky onion dome inspired by Russian immigrants. Let's not forget the neighborhood's namesake icon, which sits commandingly on the hill, mid-neighborhood. In fact, the Salt Lake City location for Utah's grandiose Capitol was lawmakers' second choice. After trekking to then-state capital Millard in Fillmore County during the harsh winter of 1855, they proposed relocating the state's capital to Salt Lake City. However, federal funding was denied because a "centrally located" capital already existed. It wasn't until the 5 percent inheritance tax was imposed upon railroad magnate Edward Henry Harriman's estate that Utah officials were able to begin planning for the Salt Lake City building, which became one of the prettiest and most intricately designed capitols in the nation. Recently remodeled and retrofitted for earthquakes, the building offers killer views of the valley in addition to irritating liquor legislation.
Capitol Hill: West of State Street to 500 West; north of South Temple, extending to city limits 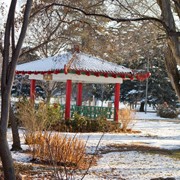 Glendale
The quintessential "west-side story" of Salt Lake City, Glendale is among the city's most ethnically diverse neighborhoods. With its concentration of immigrant populations, street encounters will include a few "hellos," as well as "¡hola!," and a slew of greetings in other languages. The neighborhood is seen as Salt Lake City's cultural crossroads, hosting treasures like the International Peace Gardens and locally owned markets catering to the Spanish-speaking population. Housing costs are comparable to other west-side neighborhoods and, with visionary projects like the Glendale Library, neighbors are becoming more and more community-minded. This story is destined for a happy conclusion.
Glendale: West of Interstate 15, extending to city limits; south of 950 South to 2100 South

Poplar Grove
Often confused with its neighbors Glendale and Rose Park, Poplar Grove is directly south of the Salt Lake International Airport. "There's a misconception about west Salt Lake," says Andrew Johnston, chairman of the Poplar Grove Community Council. "It is lower socio-economically [than the east side], but there are a lot of great schools with great kids, a strong working class and healthy families in the area." The Spanish influence is definitely recognizable, and the locally owned markets and storefronts catering to the Spanish-speaking population set this neighborhood apart, along with the low cost of living. As a neighborhood community, residents are imbued with a sense of renovation and gentrification. Most are dedicated to making their community a livable, sustainable one with open lines of communication and connectivity throughout the neighborhood. In fact, the new 9 Line, modeled after New York City's High Line, is all about connectivity. With a bicycle path and walkways planned for pedestrians, this trail will follow 900 South, connecting the east and west communities and ultimately creating a stage for a diverse sampling of what Salt Lake City can offer.
Poplar Grove: West of Interstate 15, extending to city limits; south of North Temple to 950 South

Marmalade District
Marmalade is a neighborhood you'll want to drive Grandma around when she comes for a visit. With more than 100 years of existence, Marmalade's rich history can be found in the layout, architecture and even in Warm Springs Park, located near the former Children's Museum of Utah. When walking through this 'hood, most neighbors are friendly, and there's plenty to take in.


Marmalade is home to one of the largest LGBTQ communities in the Mountain West and was dubbed Salt Lake City's "gayborhood" in the early 2000s. The Gay & Lesbian Community Center of Utah (also known as the Utah Stonewall Center) has been here since its inception in 1991.


Despite technically existing as a sub-neighborhood of Capitol Hill, which towers above on a nearby slope, this neighborhood's unique flair earned itself 'hood status because of its funky, fabulously diverse residents and residences. The Marmalade District was named after the imported apricot and pear trees planted at the beginning of the 20th century. Remnants of these orchards can be seen everywhere from the historic parks to the street names: Apricot, Almond and Quince are just a few you'll want to frolic through. Plus, this lively neighborhood is near some equally lively nightlife.
Marmalade District: North of 300 North to 500 North; east of Quince Street to Center Street