10 Utah sandwiches you need in your belly 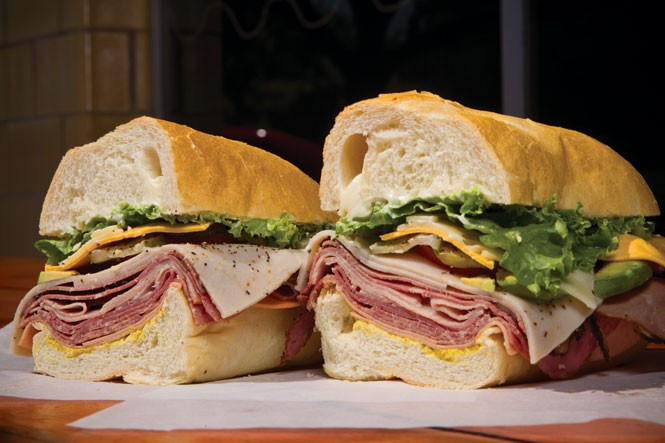 How is it that sandwiches—essentially stuff topped with other stuff and stuffed between bread slices—can be so damned satisfying? Maybe a good sandwich jars the culinary synapses into remembering the love that came with a homemade PB&J or, in my case, naked slices of American cheese between slices of nutrition-free white bread. I still get cravings for those simple sandwiches, along with my dad's fried bologna on toast. But I have to admit that a cheese & white-bread sandwich—while it'll always have a dear place in my heart—can't compete with a monster hero from Grove Market or Vito's Philly cheesesteak. I'd bet my house that you'll love those two, plus the other super sandwiches that follow, as much as I do.

In the past, whenever Caputo's Market & Deli would win awards in the sandwich categories of City Weekly's annual Best of Utah, Tony Caputo would confide to me, "You know who should have won? Grove Market." It was kind and humble of Tony, Salt Lake's "Deli Lama," to defer to Grove Market & Deli—but I'm glad he did, or I may have never discovered the over-the-top joys of the Big John sandwich. Grove Market (1906 S. Main, Salt Lake City, 801-467-8860, GroveMarketDeli.com), originally opened by Greek immigrant Pete Savas in 1947, will undoubtedly be around in 2047 because of the fair and friendly service, and the incredible bang-for-the-buck sandwiches it's famous for.

Grove Market sandwiches are made-to-order and come in full or half sizes. Don't kid yourself: the "half-size" sandwiches are about the size of my thigh. To wit, I recently ordered a half Big John sandwich ($6.99 half/$11.49 full) and was able to finish just one-third of it for lunch. I enjoyed the remainder over the next couple of days. Most food this size still has hoofs attached. The Big John features seven deli meats—salami, ham, corned beef, pastrami, bologna, turkey and roast beef—piled 3 to 4 inches high, then topped with both Swiss and American cheeses, plus mayo, mustard, lettuce, tomato, pickle and pepperoncinis on a thick, airy Ambassador roll, or on rye, French, sourdough or wheat bread. You don't so much eat the Big John as do battle with it ... and lose.

Tony Caputo can and should, however, boast about his sandwich version of the Caprese salad. The mozzarella & tomato sandwich at Tony Caputo's Market & Deli (multiple locations, CaputosDeli.com) is just that: ripe Roma tomatoes, fresh fiore di latte mozzarella, lettuce, fresh basil, olive oil and balsamic vinegar on a ciabatta roll ($8.25 whole/$4.85 half). I dare say this sensational sandwich is even healthy.

Healthy might not be the word I'd use to describe Feldman's (2005 E. 2700 South, Salt Lake City, 801-906-0369, FeldmansDeli.com) overstuffed corned beef on rye ($12.50); heaven would be. Warm, succulent, thin-sliced corned beef dripping with flavor is stacked high on excellent Jewish rye (sourced from a secret bakery) with a choice of cheeses (Swiss being the default, of course). A side of housemade potato salad seals the deal.

In South Ogden, it's the porchetta sandwich ($7.50) at Zucca Market & Deli (1479 E. 5600 South, South Ogden, 801-475-7077, MyZucca.com) that you want. Slow-roasted pork loin is stacked between toasted slices of ciabatta bread with Black Forest ham, King of the Dolomites Italian cheese and a spread of tangy mustard.

For a classic New Orleans-style muffaletta sandwich, visit The Bayou (645 S. State, Salt Lake City, 801-961-8400, UtahBayou.com) and tuck into the focaccia bun smeared with a tapenade-type olive salad and stuffed with Mortadella and Genoa sausages, plus provolone cheese. Speaking of New Orleans, for Utah's best po'boy sandwich, head down to Payson and Boudreaux's Bistro (47 S. Main, 801-465-1222, BoudreauxsBistro.biz). Po'boy options include hot roast beef, french fries with gravy, smoked sausage, andouille sausage, alligator sausage, grilled or fried chicken, catfish and veggie. But my favorite is the classic shrimp po'boy: crispy fried shrimp piled onto a toasted French roll and dressed with mayo, lettuce, tomato and pickles. You can help yourself to the Louisiana hot sauce.

For more than 40 years, Grinders 13 (1618 S. State, Salt Lake City, 801-467-3676, Grinders13.com) has been supplying Utahns with East Coast-style grinders, heros and hoagies. Rightly known for its great cheesesteak and killer Italian sub, my favorite Grinders sandwich is the hot meatball sandwich ($6.55 6-inch/$8.04 10-inch) with meatballs made from scratch (you can actually distinguish the various meats in each ball) and housemade marinara sauce, to boot.

The newly opened Even Stevens Sandwiches (414 E. 200 South, Salt Lake City, 801-727-7234, EvenStevens.com) deserves a shout-out, not just because it gives a free sandwich to a local nonprofit for each one they sell, but also because they're great sandwiches. Try the incendiary JP (for jalapeño popper) grilled cheese ($7.95) with white cheddar, jalapeño-spiked cream cheese and garlic-roasted jalapeños on French bread.

And finally, here is my current favorite sandwich in all of Utah: It's the Philly cheesesteak at Vito's in Bountiful (100 S. Main, 801-953-8486). Vito Leone is a one-man construction crew who's always found behind the counter of his small eatery. Because he constantly cooks, he can't be bothered with handling money, so there's an unusual payment system wherein customers stash their cash into a hole in the counter and make change from coin jars. I've eaten in all the high-profile Philadelphia cheesesteak emporiums like Pat's, Geno's, Jim's, Tony Luke's, etc. and I can honestly say that Vito's cheesesteak ranks up there with any of them. Don't take my word; go get your lips around one!