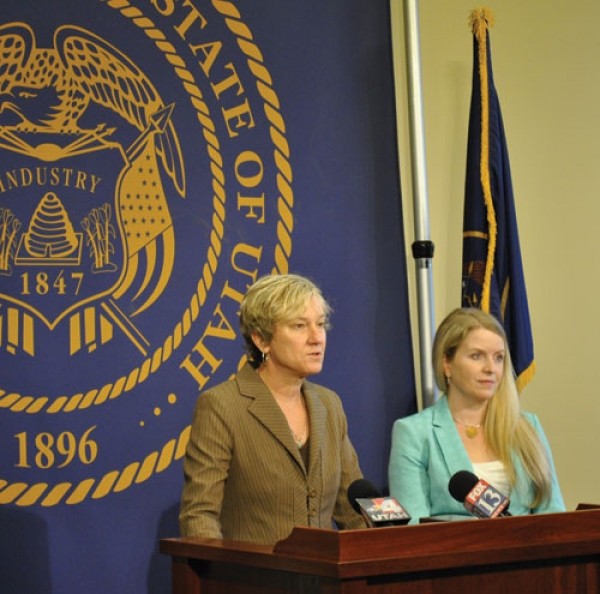 In January, when the U.S. Supreme Court halted gay marriage in Utah, state leaders quickly announced they would not recognize any of the roughly 1,200 same-sex marriages that took place during the state’s fleeting legal window.

This meant that the Department of Motor Vehicles needed to cease performing name changes, spouses attempting to jump on a husband or wife’s insurance plan would have to wait, and scores of other legal rights available to any married heterosexual couple would be withheld from gay couples.

The state has also balked at allowing same-sex parents to both be legal parents of their children. This sensitive matter has sparked confusion among judges, prompting the Utah Attorney General’s Office to intervene. In the final week of February, the Utah Attorney General filed memorandums with courts indicating that any adoptions by same-sex parents should be paused until the larger case on gay marriage, pending before a federal district court, can be decided.

Attorneys for same-sex parents, the parents themselves and the children of same-sex couples say this inequity speaks directly to the animus the state of Utah has shown, and continues to show, to same-sex couples and their families.

Laura Milliken Gray, an attorney who represents a number of same-sex families in adoption cases, says many of her clients “have kids who are old enough to understand that they are being slapped in the face. The state claims that they don’t have animus against these kids of same-sex families. If that is true, why are they interfering in their adoptions?”

Shane Marx, an attorney who attended a news conference Feb. 28 in protest of the AG’s memo, says it’s not unheard of for an AG to refrain from interfering with legal proceedings when a “constitutionally suspect” law is being challenged.

Moreover, Marx says, the state’s position on same-sex marriage adoptions—that one parent has parental rights, while another, who may have even raised the child since birth, does not—has also created a sense of fear among parents and, in some cases, judges.

The judiciary is the one arm of government that a decree from Gov. Gary Herbert’s office does not touch.
With a wall of independence, judges have been free to rule on these adoption cases as they see fit. Some judges, Marx says, have opted to wait until the appeals process works its way out. Others have sought the AG’s guidance, while another camp has viewed the same-sex marriages that occurred in Utah between Dec. 20, 2013, and Jan. 6, 2014, as legal, and processed adoptions for the couples as any other—the only requirements being that the parent seeking to adopt pass the background checks and pays the fee.

Inconsistency of this magnitude in the judiciary, attorneys say, is rare, especially when dealing with adoption cases.

“Adoptions are the most serious case you can ever handle,” Gray says. “More than a billion-dollar case, because we’re talking about kids.”

Missy Larsen, an AG’s Office spokeswoman, says her office was notified by a judge about a same-sex parent adoption that had been assigned; the judge sought the AG’s position.

And that position, Larsen says, is no different with adoptions than it is with changing a name: Until the litigation concludes, Utah’s position under its gay-marriage ban, Amendment 3, is that no legal alterations should be processed while the legality of the marriages themselves is up in the air.

“We don’t know if they’re valid,” Larsen says of the marriages.

After the AG’s Office was asked Jan. 10 to provide direction on the matter, the timeline to respond was 45 days, and they took every minute of it. Marx says the AG filed the request on the 45th day at 7 p.m., and “basically inserted themselves into these adoptions.”

The couples who are now both legal parents to their children are hesitant to speak to the press for fear of retribution from the state that they live in. The judges who have deemed the marriages to be just as legal as any other marriage granted in the state of Utah are also fearful, Marx says.

But judges—those supposedly independent surveyors and executors of justice—should not be afraid of political whims, Marx says.