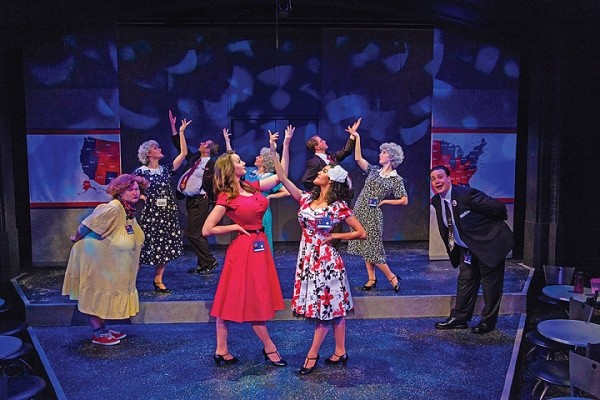 There is a certain brand of movie documentary—one that has proliferated over the past decade—that succeeds for its audience not primarily on the basis of any real measure of quality, but simply by virtue of existing. These issue-oriented films lay out their infuriating bullet points about climate change, corporate malfeasance, political underhandedness, etc., and their audience asks little more of them. They don’t have to be works of art; they function as 90-minute rallying chants.

And 35 years into the production’s history, that’s the challenge that faces Salt Lake Acting Company and the creative team behind the annual Saturday’s Voyeur: It doesn’t have to be great for those who need it most to feel that it’s great. After another year of Utah’s unique cocktail of conservative plutocracy and the heavy hand of the LDS Church, the state’s progressives are ready to shriek with delight—sometimes turbo-charged by the bottles of wine that freely flow during the performances—at seeing the sacred cows tipped, butchered and packaged for general consumption. The event supersedes the execution.

Saturday’s Voyeur 2013 finds plenty of satisfying high points in the service of that unique mission while simultaneously falling victim to some of its longtime weaknesses. Like many of the strongest Voyeur productions over the past 15 years, there’s a solid center around which to organize the musical revue numbers: setting the action on Election Night 2012 at the Church Office Building, where the optimistic Mormon faithful are preparing to see Mitt Romney elected president of the United States (and a few token Democrats find themselves less than welcome). Along the way, the characters stroll through plenty of other topics of local and national interest, including Utah’s disintegrating air quality, the lowering of the missionary age limit, the Manti Te’o fake-girlfriend controversy, and the Boy Scouts of America’s shifting policies on gay Scouts.

There’s also so much talent in the cast that it’s often plenty of fun simply to ride along with their performances. Kalyn West—as the romantically conflicted potential sister-missionary MoHanna—rips off a couple of killer high notes in her solo songs, while proving game enough at physical comedy to bounce choreography off of Leah Hassett as her friend MoBella. The choreography—by director Cynthia Fleming—is always limited by SLAC’s relatively small stage structure, yet it still finds ways for the cast members to go big with their physical performances. A trio of elderly docents (Jenessa Bowen, Connor Norton and Emilie Starr) get a dizzying number set to Johnny Cash’s “I’ve Been Everywhere,” rattling off a list of LDS temple locations with a velocity that deserves its own standing ovation. And as silly as some of the material gets, all it takes is hearing the company blow the lid off of their “Seasons of Love”/“Reasons fer Fun” to realize these singers are as gifted as any actual cast of Rent.

The frustrations come when the material falls back simply on rattling off Utah progressive talking points, from bottomed-out school funding to the ethical lapses inherent in single-party political monopoly, at times without even bothering to build actual jokes into the references. It’s particularly baffling on occasions when Nevins and Borgenicht simply repeat the same reference multiple times, assuming—accurately, as it turns out—that the audience will go nuts for it even if they just heard the same thing a half-hour earlier. Yes, it was clever the first time a Mormon obliviously complains about taxpayers having to support those Catholics and their large families; the second time we get a nearly identical gag, the ribs start to ache from the elbowing.

Saturday’s Voyeur 2013 wraps with a number set to R.E.M.’s “It’s the End of the World As We Know It,” the tweaked lyrics providing the call-to-action final kick that has been characteristic of many Voyeurs over the years. It’s noteworthy that the production doesn’t feel like mere impotent fist-shaking at The Man, but actually fires its audience up in the eternal hope that maybe, just maybe, things will be better next year. But audiences can also keep pushing the institution of Saturday’s Voyeur itself—as goofy and energetic as the show can be—to be better. We can always ask for more than the occasions when we’re simply being congratulated for being in on the joke.