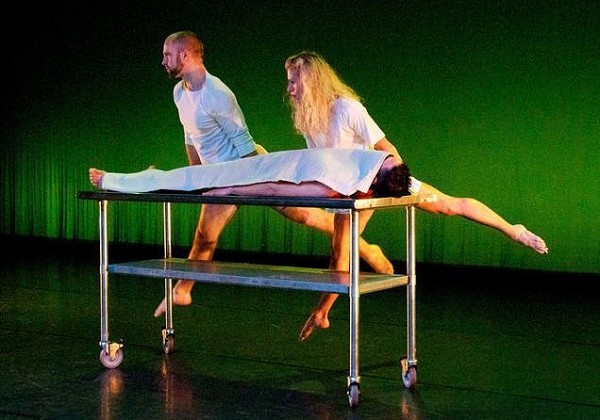 According to Stephen Brown—the SB in SB Dance—audiences typically get the gist of a dance piece within the first few minutes of watching it. Then, to their utter dismay, they are stuck in their seats suffering through the next 20.

His goal, as artistic director of the cutting-edge company, has always been to create work that’s unique and interesting enough to watch, engage with and be surprised by from the point it is set in motion until the moment the curtain falls. In that way, he’s determined to keep each piece progressing in ideas, movement and creativity by pushing boundaries and pulling in audiences. His newest creation, Of Meat & Marrow, is just his latest tack.

It has always been a bit hard to imagine what you are going to get from the mad world that is SB Dance, year after year, oddity after beloved oddity. Mostly it has been dance theater, like past works Frank’s Ticker, The Bucket and Waltz of the Dog-Faced Boy. There was also a short-lived stint in rather strict theater (Drosselmeyer Inc.) and a period of retrospectives and remixes as the company faced various anniversaries. Brown even mentioned at one point that this newest endeavor didn’t actually contain that much dance at all—a statement he laughingly took back later during a rehearsal brimming with complex and innovative movement.

The thing is, SB Dance productions can indeed be difficult to pigeonhole, and that has always been a welcome trait on the Salt Lake City scene. But when it comes down to it, most of the performances certainly do contain dance, just as they almost all contain some traditional theatrical elements as well, and even musical stylings periodically (see Revenge of Yoga the Musical). But this time around, Brown seems to have an even more concrete abstract idea at play: movement sculptures.

Take, for instance, one section from Of Meat & Marrow that centers on a giant jack with dancers weaving in and out of its legs as others rotate it point to point, tick-tacking about the stage. Or another segment, with two bodies cantilevered from the ceiling by hooks clasped to their feet, clambering up and down each other in a weird, inverted waltz, heads careening dangerously close to the ground. Or perhaps the piece with the cadaver table being wheeled around with wild abandon, limp bodies flailing about with bizarrely captivating precision. With all that in mind, it makes sense that each slice of the show is treated as an individual spectacle that fits like an image puzzle piece into a greater narrative whole. So the cadaver tables and the giant jack and the bodies hanging like meat all become those detailed “movement sculptures.”

To help ground such work in some kind of larger framework, Brown has enlisted the help of Carolyn “Winnie” Wood as associate director of the company. It’s a role she describes as “trying to direct something that isn’t completely written yet.” But her aim is to ultimately help SB Dance “develop a strong movement vocabulary without forgetting to tell a compelling story in which something happens and articulate bodies make you feel the way they feel.

“For this new work we’re trying to focus on that even more,” Wood adds. “Of Meat & Marrow is really about the thing people fear the most: death. It’s a journey through death and the afterlife. Part Tibetan Buddhism. Part silly. The meat refers to our bodies as simply that: meat. But the marrow, that’s something else entirely. That’s the inner core of life.”

Part of what helps to deliver that enigmatic interior crux to an audience is the odd sack of musical choices typically favored by the company. From one section to the next, it could be heavy and repetitive dance beats before moving into a rather raucous Tom Waits ditty. That, in turn, might filter down into a more expressive baroque medley before ending with some upbeat jazzy trip-hop number. In fact, in this new work, Mozart is paired quite beautifully with intricate movement mirroring the fast-paced piano keying of the celebrated composer. But as is his wont, Brown is quick to ensure that any of the intrinsic lyrical quality to the composition is countered by fragmented gestures—the same idea that beauty is best augmented by the grotesque, and the sharpest line is made all the more so by a perfectly placed break.

It’s apparent that Brown strives for just such balanced energy in every sequence he wraps his idiosyncratic choreographic hand around. That drive influences each individual section—and, furthermore, each production as a whole—ultimately creating a body of work that does the same. Of Meat & Marrow is just the latest addition to the creative entity that is SB Dance, itself a sculpture that is perpetually in motion.