Scandal in the Wind

A film festival of stories about politicians under pressure.

So yeah, there are big things percolating in national politics. Wherever you are on the political spectrum, it's hard to keep up with developments in the latest major scandal to hit the White House. If you need a momentary break from the madness, but want to get a flavor of some other stories about politicians facing intense scrutiny, here are just a few relatively recent examples to contemplate the many ways 2019 could shake out.

Secret Honor (1984)
Any conversation about "political scandal" in America begins and ends with Watergate, and multiple films have ventured into those murky waters, from the iconic All the President's Men to Oliver Stone's Nixon. But this chamber piece—directed by Robert Altman from the stage play by Donald Freed and Arnold M. Stone—takes a unique point of view by focusing entirely on the reaction of Nixon himself to the unraveling of his presidency. Philip Baker Hall gives a towering performance in this speculative account that has him ranting and trying to shape the historical picture of his political life while alone in his private study. As we watch a powerful, angry man wrestle with trying to get public opinion on his side, it's hard not to see a few parallels to contemporary circumstances. 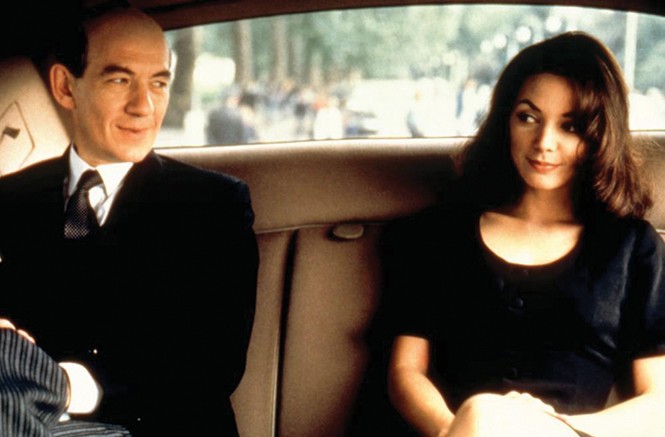 Scandal (1989)
England is facing its own whirlwind of high-level incompetence right now, but here's the true story of one of the most infamous events ever to rock that nation. In 1961, British Conservative Secretary for War John Profumo (Ian McKellen) has a brief affair with then-19-year-old would-be model Christine Keeler (Joanne Whalley), which he is ultimately forced to confess, ending his political career. But the film is most interesting in its profile of the relationship between Keeler and the man who pulls her into the corridors of power, Dr. Stephen Ward (John Hurt). Although the titular scandal brings a government to its knees, it's ultimately a sympathetic story of people who have no idea that their life of fun and debauchery could have history-altering consequences.

Wag the Dog (1997)
It didn't take long for the title to become something of a shorthand for any attempt to deflect attention from an impending scandal with even bigger news, but the film itself is fascinating and brutally hilarious even beyond becoming part of the lexicon. When a fictional president faces P.R. disaster from allegations of sexual misconduct, a political fixer (Robert DeNiro) and a Hollywood producer (Dustin Hoffman) collaborate to create a massive distraction in the form of a ginned-up war in Albania. The script by Hilary Henkin and David Mamet brilliantly deconstructs how easy it is to manipulate the public with appeals to patriotism—a story that anticipated with spooky prescience our short attention span for any news story.

The Contender (2000)
Film critic Rod Lurie wrote and directed this tale about a lame-duck U.S. President (Jeff Bridges) appointing Laine Hanson (Joan Allen) as replacement after the death of his vice president—and how political opponents attempt to sabotage her nomination by pulling up allegations of wild behavior when Hanson was in college. The narrative is over-earnest at times, but gets its punch from the performances—Bridges, full of bristly energy as this president tries to preserve his legacy, and Allen as a woman who refuses to address or defend herself against charges that she believes has nothing to do with her fitness to serve.

Fair Game (2010)
This fictionalized account describes how former diplomat Joe Wilson (Sean Penn) wrote an editorial discrediting the Bush administration's claims of an Iraqi nuclear enrichment program in 2003, and how administration officials subsequently "outed" his wife, undercover intelligence agent Valerie Plame (Naomi Watts). Early scenes do an effective job of setting up Wilson as an easily-incensed crusader, and you can still build up a healthy sense of outrage at the way administration functionaries push until they get the answers they want. But as the narrative turns to how the Wilson/Plame family is hounded in the media by allegations of partisanship and "boondoggling," it becomes just another story of a marriage under pressure, and there's nothing director Doug Liman can do to give it energy. Domestic angst doesn't "humanize" this story of corrupted power; it simply buries the lead.

Weiner (2016)
At one point, co-director Josh Kriegman asks Anthony Weiner, "Why have you let me film this?" It's a great question, as the 2013 New York mayoral campaign which was intended as ex-congressman Weiner's political comeback—after his 2011 sexting scandal—instead imploded with new allegations of impropriety. Weiner dives fascinatingly into the art of spin, as Weiner and his staffers attempt to salvage the campaign, but there's also a level on which Weiner attempts to answer a blunt question posed by MSNBC's Lawrence O'Donnell: "What is wrong with you?" There's a remarkable character study here of a man who seems to be addicted to attention, given a distinctive and vital visual style. IfWeinershows us anything, it's that the answers to "Why have you let me film this?" and "What iswrongwith you?" might very well be the same.