Swallow missed the chance for an image makeover 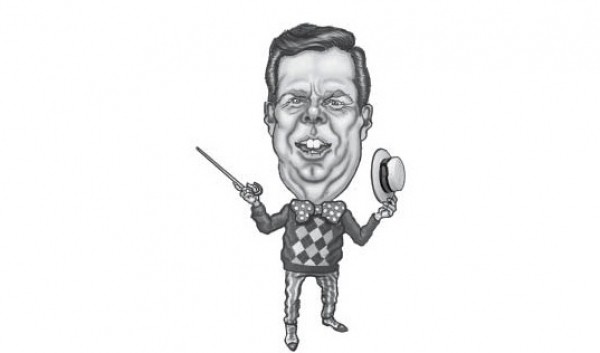 A leopard can’t change its spots, and John Swallow can’t stop being a schmuck. That was evident in Mr. Swallow’s Nov. 21 resignation speech, as well as during his Friday appearance on The Doug Wright Show, Mr. Swallow’s go-to softball venue. As usual, Mr. Swallow alternated between feeling sorry for himself and blaming everyone else in the world for his woes. Why is everyone always picking on me? Why is everyone so interested in those bribery allegations, those shakedown schemes, those campaign violations and, especially, that lifetime supply of argyle golf sweaters?

No one, of course, expected Mr. Swallow to exit with any grace or dignity. But surely the beleaguered public servant could have shown a bit more class. He lamented how much of his own money (and, of course, campaign donations) had gone to respond to all the fishing expeditions and witch hunts designed to bring him down.

Perhaps he should have spent a few bucks on a really good public relations and/or image consultant. One of the best PR guys and stellar image consultants around is Aldeni “Al” Ensernos, who has helped schmucks like Mr. Swallow navigate the treacherous seas of public scandal. We contacted Al to get his unique perspective on the Swallow scandal.

Al: Terrific. Just got back from Toronto where we’ve been working with that crazy Mayor, the guy who does such a great Chris Farley impression.

Al: The very one.

DE: Must be hard to do good PR and image work on a doofus like that.

Al: You might think that. But you’ve got to think outside the box—a phrase, by the way, that me myself and I coined back when I was doing an image makeover for Spiro Agnew. To coin another phrase, which I developed when I worked with Lawrence Welk, when you got a lemon, make lemonade. In the case of both Agnew and that Ford clown up in Canada, you have to squeeze their lemons as hard as you can.

DE: Could you elaborate?

Al: Happy to. Let’s focus on Mayor Ford. I knew right off the bat that I couldn’t do a traditional makeover job. Best thing is to totally brazen it out and, instead of excuses or apologies, ride that wild and crazy horse of a man all the way to the barn. Can’t change the spots of the leopard, so just make ’em bigger and brighter. With fatso Ford, we said the more outrageous the better. Be yourself. Worse than anything, people hate a hypocrite.

DE: So how would you have handled the Swallow imbroglio?

Al: First off, whoever was advising him, image-wise, was obviously clueless. Everything Swallow did was catastrophic. Once all the sleazy stuff came out—pay-day lenders, bribes, pay-offs, cover-ups, election violations, argyle sweaters—he had two different options.

First would have been a complete and abject mea culpa, the more humiliating the better. Americans love to forgive someone who comes clean, confesses, and undergoes the moral equivalent of the mortification of the flesh. Instead of sullen defiance and prim protestations of his virginal innocence, Swallow should have sucked it up and swallowed his sanctimony. With wife at his side, Swallow should have shown a contrite spirit and broken heart, and begged for forgiveness and a second chance. If he could summon tears, all the better. Or he could have faked deep sobs or trembled and hyperventilated, which Utahns especially appreciate in their male authorities. If all else fails, I always recommend that the disgraced figure collapse on the carpet and assume the fetal position. That usually does the trick.

Al: Swallow could have pulled what insiders now call the Crazy Canadian Mayor Maneuver. You just go for broke. In Swallow’s case, he should have just ratcheted everything up. Announced that he was open for business. Post a price list for services rendered. Hold one-day bribery specials, offer to personally provide a hands-on shake-down experience, pass out Krispy Kreme donuts for bags of cash. And I think he really could have won the public over if he held a Putting For Favors event. Swallow would be a real natural for that: picture him standing outside his office like a carnival barker, wearing a big grin and an expensive argyle sweater. It would be sweet.

Al: Pleasure’s mine. Happy to help.