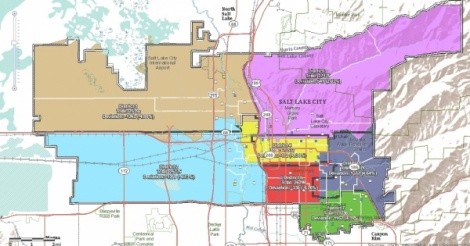 “One person, one vote” is the rule of thumb when it comes to redistricting—the post-census process of drawing political boundary maps equally distributed by population. But while “one person, one vote” may equal fairness for adult residents, some advocates on Salt Lake City’s west side say the equation doesn’t add up to fair representation on the Salt Lake School Board for the huge number of children who live on their side of the tracks.

According to student-enrollment estimates from the Salt Lake City School Board, more than half of Salt Lake City’s schoolchildren live on the west side, but are represented by just  two out of seven board members. The “one person, one vote” rule translates into the seven districts containing equal (within 5 percent) numbers of residents, but more school-age children reside on the west side.* School board Precinct 2, which encompasses turf south of North Temple and west of Interstate-15, has 70 percent more school-age children than the city’s ideal average. The west side’s Precinct 1, north of North Temple and including Rose Park, has 80 percent more school-age children than the ideal average.

“The margin is way, way wider,” says Alama Uluave, who represents Precinct 2 on the school board. “But that is point A, we want to get to point B. That is what all the discussion is about.”

While big-name politicos might have their future careers wrapped up in the outcomes of statewide redistricting, the city-level mapmaking is often less flashy, and grabs fewer headlines. But for west-side advocates, the school  board-redistricting process is one of dire importance, so the needs of the city’s children are not left underrepresented for another decade.

For newly elected District 2 Councilman Kyle LaMalfa, the federal “one-person, one-vote” law is fair for voters, but has over time hurt the representation of children.

“It’s a good rule that every representative should represent the same number of people for the same office, I’m cool with that,” LaMalfa says. “But the way the lines have been drawn historically, they’ve given preference to areas that have fewer kids in terms of [school board] representation.”

Uluave has been tracking the issue for the past eight years, since he came onto the school board campaigning on a platform of trying to get more voice to the west side’s families. But Uluave has found he can only tweak the numbers so much.

“You’re never going to satisfy everybody,” Uluave says. He points out that the population on the east bench is older, and it’s rarer for young couples to reside in the richer neighborhoods, which has, over the decades, put 11,917 of Salt Lake City’s roughly 23,697 students on the west side.

As a member of the school board, Uluave had access to mapmaking software provided by the city and helped craft “Map 1,” which drags the 4th school precinct—downtown and central city—west across I-15 into the eastern edges of Glendale in Precinct 2 and the southeast corner of Fairpark in Precinct 1. His hope is that candidates from that neighborhood could bring more voice to the west side if elected. But Uluave also says a community group he has informally interacted with wasn’t able to get access to software until more than a month after city government. “By the time they got on board, they were really rushing,” Uluave says. The delay in getting maps out to the communities has been frustrating, he says. While he helped craft the first map, the families he represents on the board in the citizen group created the second map, putting him in a difficult spot. Ultimately, he says, he will support the citizens’ map.

The citizen map that was created sought to extend the boundaries of Precinct 1 on the west side and drag them east, across I-15 into the Capitol Heights neighborhood. Uluave says that the school board’s map was crafted as a recommendation and that it was done in a manner that it could accommodate future tweaks and revisions.

The improvement would be welcome, but would still have 40 percent of Salt Lake City’s schoolchildren represented by the two prominent west-side precincts.

LaMalfa, who campaigned for greater equity on the school board, says it is better. As far as the redistricting process goes, he sees the school-board maps and the Salt Lake City Redistricting Working Group—an independent redistricting advisory body—as having recognized that I-15 can no longer divide the city, and that the currently proposed maps, LaMalfa says, push the boundaries “Westward ho!”

James Guillkey, the chair of the working group, says the body has worked well and without controversy.
“I joined the group because I’m a geek, I guess, but also because, having seen what was going on at the state, I wanted to make sure there was no axe-grinding on the committee,” Guillkey says. “I was pleased with everybody on the group; everyone had the best interest of the city.” Guillkey points out, for an example, that in maintaining communities of interest, the group created maps that didn’t divide community councils across different city council districts. One map, which brings Central City into the same district as Poplar Grove, and combines Liberty Wells with half of Glendale, was created not by a west-sider but by Liberty Wells resident Elliott Sykes.

LaMalfa is excited for upcoming public comment and to later take part in approving the final maps, which are up to the city council’s vote. He’s confident that the maps will reflect the reality of Salt Lake City citizens’ westward migration.

Editor's note: This article has been corrected from the print version to clarify the population distribution of districts.