Spider-Man: Homecoming brings a welcome focus on a 15-year-old hero. 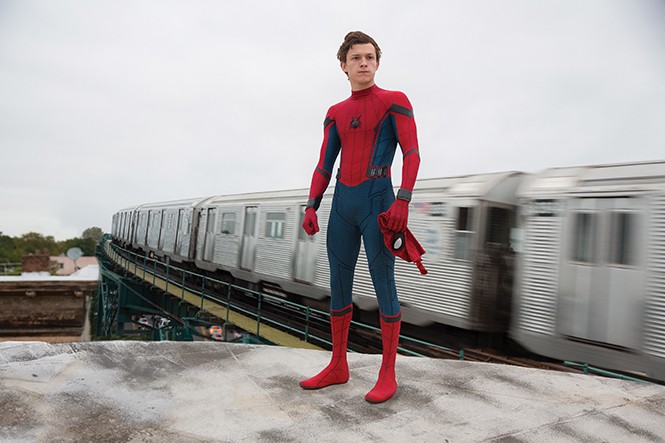 Stipulated: Nobody needs another Spider-Man movie. The jokes about multiple reboots of the web-slinger are all valid, and even keeping in mind the admirable restraint in Spider-Man: Homecoming of not revisiting the most familiar material—no radioactive spider, no death of Uncle Ben, no J. Jonah Jameson, no redheaded Mary Jane—it's understandable that we're all a bit weary of this character.

There are, though, a few layers of meaning buried in the title Spider-Man: Homecoming suggesting why, if we did need another Spider-Man movie, we should be glad we got this one. It's certainly a nod to Spider-Man returning to the fold of the wider Marvel Cinematic Universe, connected to this incarnation's popular debut appearance in last year's Captain America: Civil War. Most literally, it's a reference to a dance at the Queens high school of Peter Parker (Tom Holland). But connected to that is a reminder that this character is a 15-year-old kid, with the typical problems of a 15-year-old kid in addition to the ones he encounters while fighting super-villains. Director Jon Watts gets back to the fundamental story of a teen coming-of-age as a superhero, and it's a welcome approach.

Watts kicks off that sensibility by efficiently reminding us of Peter's adventure during Civil War's Berlin battle through Peter's selfie videos; if this kid is a teenager, he's a teenager of his time, compulsively documenting his life. After those events, however, Peter finds himself adrift: He wants to be the kind of hero who saves the world with The Avengers, but while he awaits mentor Tony Stark's (Robert Downey Jr.) phone call that never comes, he's left foiling bicycle thefts and giving directions to nice little old ladies as their friendly neighborhood Spider-Man. When he discovers a network of criminals selling powerful weapons—led by the mechanical-winged Vulture (Michael Keaton)—Peter wants to jump in to help, even as Stark warns him to stay in his inexperienced lane.

The context of Peter Parker as a high-school nerd permeates Homecoming, as Watts aims for a vibe with more than a few nods to 1980s John Hughes comedies. A couple of key scenes are scored not to contemporary hits, but to vintage tunes by The English Beat and A Flock of Seagulls. A scene from Ferris Bueller's Day Off makes a cameo appearance in a sequence where Spider-Man races through multiple suburban backyards. Even the supporting cast of misfits—from Peter's best friend, Ned (Jacob Batalon), who learns of Peter's secret identity, to anti-social Michelle (Zendaya) and her spin on Ally Sheedy in Breakfast Club—and checked-out teachers feels familiar, although considerably more diverse than Hughes' movies.

This is also a comic-book movie, of course, and Watts understands how to make this story work in that idiom, too. It might not be possible for anyone to match the freewheeling kineticism Sam Raimi brought to the original Spider-Man trilogy, but Watts finds considerably more exuberance in his choreography than Marc Webb dribbled onto the Andrew Garfield-led Amazing Spider-Man movies. This is the chatty, trash-talky Spider-Man of the comics, and while the big final set piece does get a bit too frantic and busy to absorb fully, Watts shows enough chops to make it easy to forget that his big résumé item before this was the indie thriller Cop Car—a movie where the only similarity to this one might be young people in over their heads.

Yet that small connecting point—the idea of being asked to grow up too fast—proves to be crucial. As fun and frisky as this movie is—including a post-credits tag scene that is easily the best one the Marvel Universe films have delivered to date—everything is anchored by Holland's engaging performance, full of equal parts eagerness and insecurity. It's a perfectly Peter Parker moment when, during a school trip, the girl he has a crush on (Laura Harrier) invites him to hang out in the pool, but Peter has to make a choice to follow a lead on the bad guys. The adolescent tug-of-war between the carefree life of a kid and the moral choices of an adult are everywhere here, making for a rich narrative beyond the fights and explosions. If Spider-Man is going to be with us for a while, let it be a Spider-Man whose high-flying exploits are complicated by a friend who reminds him, "But we have a Spanish quiz."