Scott Pilgrim vs. the World

Scott Pilgrim vs. the World captures the quirky energy—but not the soul—of its source. 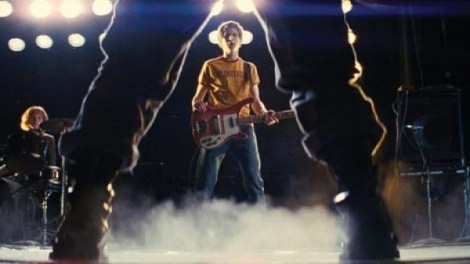 In Edgar Wright’s adaptation of Bryan Lee O’Malley’s cult-hit Scott Pilgrim graphic novel series, the visuals pop with jagged panel-break split-screens and straight-outta-Batman on-screen sound effects. Key lines of dialogue and every significant plot point are snatched precisely from O’Malley’s text, and the Toronto setting is retained. The flashback sequences even incorporate O’Malley’s distinctive manga-esque illustrations. On the surface, Scott Pilgrim vs. the World seems like a meticulously faithful adaptation—the operative phrase being “on the surface.”

It’s a tricky thing, this notion of “fidelity” to source material. When a text is known and adored in the popular culture, like Twilight or Harry Potter, fans will tolerate nothing less than slavish devotion to the stories they already love. But usually they’re thinking about that slavish devotion only in terms of basic story arc—not necessarily the way tone and pacing can affect that story arc. Scott Pilgrim vs. the World finds Wright delivering all the quirky energy of the print version, without always finding the distinctive rhythms that gave the story its soul.

He’s still telling the funky tale of Scott Pilgrim (Michael Cera), a post-collegiate Canadian who’s “between jobs” and spending his time with his bandmates in the punk-ish trio Sex Bob-omb. He has just started a relationship with 17-year-old high school student Knives Chau (Ellen Wong) after a long recovery from a bad breakup, when he spies—first in his dreams, and then in a library—Ramona Flowers (Mary Elizabeth Winstead). She’s off-beat, she’s beautiful, she’s everything Scott wants—and she has seven evil exes who Scott must defeat in battle before he’s worthy of being her boyfriend.

That wild notion of Scott’s life essentially being represented as a video-game was one of O’Malley’s most ingenious conceits, and Wright latches on to it from the moment the Universal Studios logo appears in pixilated form, the music taking on the tinny electronic ping of a vintage arcade game. When Scott fights the evil exes, it’s not just a fistfight; it’s an epic heroic ninja brawl, with punches and kicks sending people crunching through walls, and defeated victims exploding into showers of coins. Wright embraces all the visual gags that device offers him, like the character descriptions that appear next to people, and the status bars that can represent either the amount of energy left in one of Scott’s adversaries, or the amount of pee Scott has to empty himself of.

Wright is so fond of these gimmicks, in fact, that he seems unclear on when he doesn’t have to use them. The ringing of a phone is accompanied by seeing the word “RIIIIIIIING”; Scott’s demoralized thunking of his head against a telephone pole apparently demands a similar visual representation of “THUNK.” From start to finish, Wright appears determined to pack every frame with goofy bits of comic-book-ish business.

And that’s where he misses out on one of the key elements of the Scott Pilgrim books: the deliberate lethargy of huge swaths of them. Scott’s a fairly pathetic character at the outset, and Cera certainly has a gift for casual self-deprecation. But the series is Scott’s journey toward seeing his life as worth living fully between earth-shaking battles—and as challenging as it might have been to allow parts of Scott Pilgrim vs. the World to poke along like an early Richard Linklater film, that’s really what Wright should have been aiming for as he moves toward Scott’s learning moments.

He still puts together a funny and entertaining piece of work. The casting in particular is terrific, from Anna Kendrick as Scott’s sister to Kieran Culkin as his gay roommate, with hilarious turns by erstwhile cinema superheroes Chris Evans and Brandon Routh as two of the evil exes in need of dispatching. Wright finds some great material when he introduces his own additions to O’Malley’s universe—a cadre of stunt-double henchmen for Evans’ cocky actor; a mid-battle Bollywood break; a laugh track for sitcom-style punch lines—and the action is gloriously over the top. It’s just hard not to wish that Wright had opted not to keep the attitude amped up for a full 113 minutes. For all its wild and enjoyable humor, Scott Pilgrim vs. the World could have been more about a guy growing up to discover that being hip and edgy isn’t everything.

SCOTT PILGRIM VS. THE WORLD