Scotty VerMerris shares the tunes that get him pumped for extreme skiing. 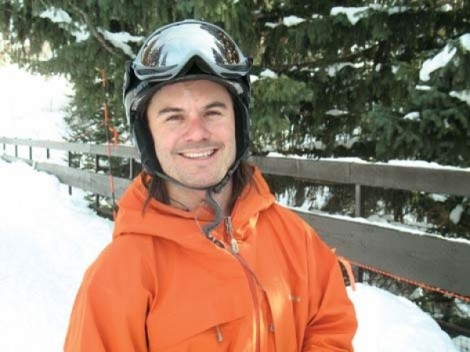 Scotty VerMerris—professional skier, team manager and Utah sales rep for Coloardo-based ski manufacturer Icelantic Boards—puts on Skull Candy headphones and rocks out while front-flipping off 60-foot cliffs. A firecracker with skis, VerMerris faces fear without hesitation and has the injuries to prove it: broken femur, broken ankle, split cartilage under the patella— that’s just the left leg. His season (and nearly his career) ended last year with that broken femur, but music expedited his rehabilitation. “The brain heals with the body. Uplifting messages and beats helped me cognitively recover,” says VerMerris. Now he is training for the Subaru U.S. Freeskiing Championship at Snowbird in March. His passion is contagious: “Skiing fuels my desire for adrenaline, simultaneously, meeting my psychological needs of power, control, freedom, and belonging. It’s a life opportunity to continually grow; it’s experiential education.” Currently, he’s focusing on the aesthetics of skiing—line and terrain. Still, he launches daring tricks like a Misty 9 now and then.

Growing up in Ohio, an unlikely place to propagate a pro skier, VerMerris was the kid leaving race practice to build ramps and jumps. Deciding at an early age to move west, he landed at Colorado State to study human development. After graduation, he undertook a job as counselor at a wilderness-based clinical therapy program, taking root in Salt Lake City and falling in love with the Wasatch, where his freestyle and big-mountain skills developed. After antagonizing Icelantic reps at a party and skiing with founder Ben Anderson in 2004, he turned a hobby into a career by landing a key sponsorship.

Icelantic Boards is all about creativity, design, and art. Next year’s product line is especially geared toward music lovers— perfect for a skier with melomania.

VerMerris stays busy, filling up even more time by becoming hands-on in creating action-sport videos, as the featured skier and producer. How does he squeeze his projects in? “All the passionate people I am surrounded by are keeping me here in Utah,” he says.

I talked with VerMerris during a break while he moved his home from Emigration Canyon to Sugar House. “Now, I won’t be such a homebody. I can get out, and get more connected to the community,” he says. However, he definitely has a presence in the Wasatch. Having a special affinity for Snowbird and Alta, accomplishing a majority of filming there, he is known to frequent The Goldminer’s Daughter with locals and friends.

Beyond skiing, VerMerris sails and races with the Park City Sailing Association, the fastest growing fleet in the country, and is vying for head sailing instructor of the burgeoning Junior Sailing Program this upcoming summer.

Whether recovering from injuries or skiing, VerMerris mainly listens to reggae and hip-hop because they are positive and meditative: “It fuels my inspiration. The universal themes are applicable, such as battling adversity and celebrating times that are good. This is what professional skiing is all about.” At home, he listens to jazz, blues, or even classical.

In his fearless fashion, VerMerris was up to the iPod shuffle challenge. Fourteen gigs of music, and no peeking at the line, no specking out the landing for this jump—just pointing and shooting for some powder shots. Afterward, he said, “My iPod’s being really cool right now. I was expecting the worst.”

Music What's On Your iPod ,