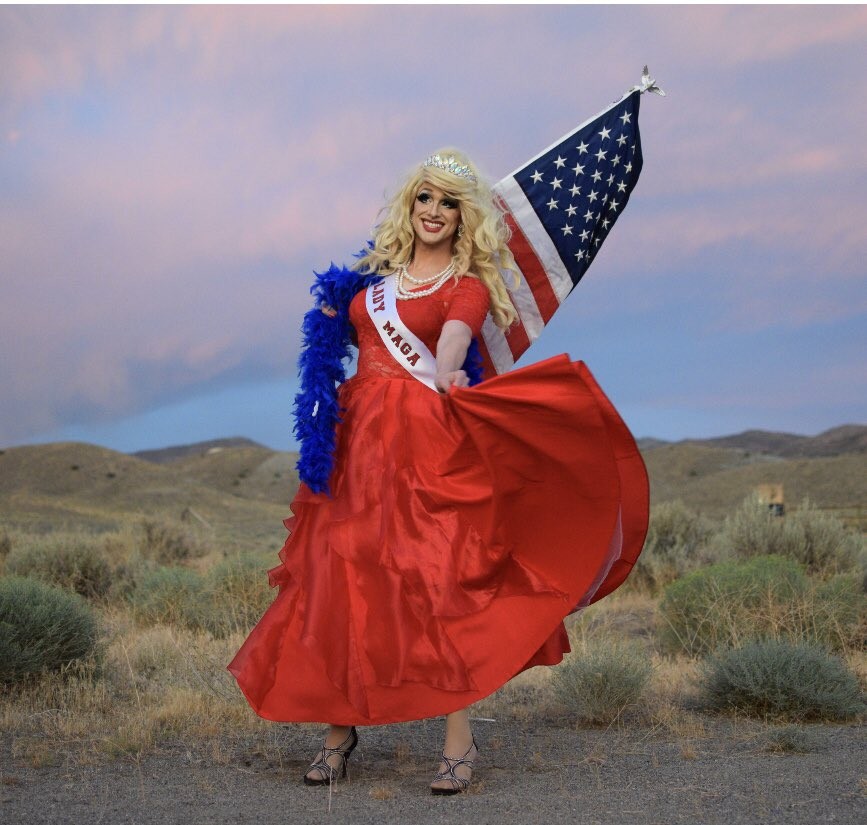 Ryanna Woods has not been sleeping well lately. Her inbox is flooded with angry messages and comments. People have sent her threats of violence, she says. Now, she's worried for her and her family's safety.

But this is her "personal sacrifice," she says, for "coming out" as a drag queen who supports President Donald Trump.

"This is my way of serving my country as a patriot," the performer says, looking like a bundle of contradictions in her Britney Spears T-shirt and trademark red MAGA hat during a recent sit-down interview with City Weekly.

"It's discouraging, it's exhausting, it's frustrating," she adds. "But I was raised to believe that we should defend our Constitution, and I truly believe that Democrats are attacking our free speech and especially our Second Amendment right now."

Other queens in Salt Lake have responded with a mix of emotions. Many are furious about what they see as a vicious attack on drag culture's core values, but some are also wary of giving Lady MAGA too much attention when they could promote more positive values instead.

Politics have been closely intertwined with drag performance for decades. Self-identifying drag queen Marsha P. Johnson and trans rights activist Sylvia Rivera were on the front lines of the Stonewall riots in 1969 and established grassroots organizations during the following decade to support homeless queer youth and challenge gender norms. Performers like Crystal LaBeija of the famed House of Labeija kicked open the door for black and Latinx queens, while New York's Wigstock and other festivals provided spaces for people to celebrate themselves in the darkest days of the AIDS epidemic and in a society often built against them.

Woods (who asked that City Weekly not use her real name) has also found liberation through drag. Before unveiling her trailer-park "twin," she was performing cosplay as Disney princesses, channeling the joys of fantasy and magic that were denied to her as a child. Growing up in small-town Nevada, she was raised in a family of devout Mormons. Her dad, she says, was a prominent anti-gay activist. One of her earliest childhood memories is a relative punishing her for collecting girl-oriented toys by torching them in the fireplace.

Woods, who's in her 30s, says she's struggled her whole life with accepting the fact she's gay. The pain got so intense that she ended up in an intensive care unit four years ago, suffering from a mental breakdown. She then came through thanks in part to Disney's Frozen, finding a kindred spirit in snow queen Elsa, who was forced to keep her magic powers a secret.

"The moment in the film with her father telling her, 'Conceal, don't feel, don't let them know that you're different,' I was like, 'That's me,'" Woods recalls, breaking into tears at the memory as she sits and talks in a café at City Creek Center.

"She went up to the mountain by herself, and that was me in those moments of suicidal agony," she adds. "Like, 'I just wanna die. I'm wrong, I'm bad, I can never be the perfect Mormon.'"

Woods started performing while living in Boston, Mass. Later, back in Utah, she started navigating the local drag scene, performing as Rapunzel and Britney Spears on local stages. But her Mormon-bred modesty and conservative values made it hard to fit in. While many peers consider Trump hateful and against marginalized communities, Woods finds his public statements empowering, and was offended by progressive backlash to Trump and his right-wing media supporters.

"I would prefer a president with a messy tweet history than a polished politician who I don't really know what they're thinking or saying," Woods says. "He comes out and says, 'Shithole country,' and yes, obviously, he could've said that differently. I just feel like he's not a politician. He's just this hardcore businessman who's like, 'This is what needs to be done.' His flaws and imperfections are actually part of what have transformed politics."

Lady MAGA seems to have little to do with drag tradition. In a now-infamous blog post on her website, she deploys the rhetoric of the likes of Ben Shapiro and Milo Yiannopolous as she blasts the supposed "cult"-like political correctness of the LGBTQ community. In another post on Instagram, Woods poses as a parody of a liberal "Social Justice Warrior," wearing a top-knot and pretending to smoke a joint while rattling off an absurdly long list of causes and labels.

It's posts like these that make other Utah queens roll their eyes at MAGA's claims of victimhood. If she's going to dish it out, surely she could've anticipated a backlash.

"On some surface level, she may have a point—that if you don't have similar values, you kinda get blacklisted or kinda get shoved to the side," Starr acknowledges about the drag scene. "But I don't think that's necessarily, in our community, a bad thing. We fought to get the rights that we have. We fought to get to where we're at. We still have such a long way to go. And so when people believe these hateful things that she believes and support these hateful things that Trump actively promotes, that's a very big challenge to what progress we have made."

"If Lady MAGA wants to do drag shows and voice her support for the president, more power to her. The same power afforded to her gives people the power to voice opposition. ... What we can't be is divisive." —Utah County Commissioner Nathan Ivie tweet this

Utah County Commissioner Nathan Ivie, a Republican and Latter-day Saint who came out as gay earlier this year, originally agreed to speak at an LGBT conservatives forum organized by Lady MAGA. In an email statement to City Weekly, Ivie says he decided to drop out because the event "turned into something far beyond what I was told."

Ivie later elaborated during a phone interview. "It kind of transformed into this really pro-Trump rally type of thing that I just wasn't comfortable with," he said. "If Lady MAGA wants to do drag shows and voice her support for the president, more power to her. The same power afforded to her gives people the power to voice opposition. ... What we can't be is divisive."

Woods is now raising funds to fly in two other conservative queens, Ariel and Zane DMaaj, to speak and perform at the event, which is scheduled on Friday, Sept. 6, at Murray's Desert Star Playhouse. Frederick Luchycky, president of the Utah chapter of the conservative LGBTQ group Log Cabin Republicans, has also come on board.

Ariel and Zane DMaaj are based—of all places—in the progressive bastion of the San Francisco Bay Area, and they operate a YouTube channel where they discuss what Ariel characterizes as their "pro-America" political views. Ariel says she's excited to connect with Woods with hopes of building something bigger.

"We found her through social media and absolutely loved what she's doing. We were just so impressed and proud and relieved to know that there's others with similar views to us," she enthuses.

Still processing the backlash she's experienced over the past couple of weeks, Woods insists her original goal was not to provoke anger. The fact that Trump banned trans people from the U.S. military has given her a lot to think about and discuss. In an Instagram video posted after her interview with City Weekly, she talks about wearing her MAGA hat in public for the first time—a move she framed as potentially risky, but which turned out to be not a big deal as she walks through City Creek Mall.

"We need to just make our Make America Great Again hats and be kind and loving and people will not freak out," she says, under the hashtag #ComingOutConservative.

Still, in this age of internet-fueled chaos, she seems prepared to raise herself up as yet another lightning rod.

"I need people to remember that anyone commenting on my social media, if it is not me directly, does not speak for Lady MAGA. Because I know a lot of hurtful things have been said to people who disagree with me, and that is just as wrong as the threat of violence," she says. "Don't attack hate with hate."

Positive message aside, Starr, who is co-organizing "Fuck Hate," a protest outside the conservatives forum, hopes Woods does better.

"We as modern-day drag entertainers have to decide what we're putting our weight behind. I firmly believe that when it comes to messages of racism or transphobia or hatred and bigotry toward any marginalized people, that we need to stand up and do the right thing and defend them," Starr says.

"I particularly have an incredibly soft spot—and it's a very, very sensitive spot for me—with people being transphobic, because I'm married to a trans man," Starr continues. "Hearing some of the rhetoric she spouts against trans people and against gender identity on that blog, it's like, we're supposed to be one community. We're supposed to support each other."


Update, Sept. 2: Claiming she’s been shut down by a “fascist leftist mob,” Ryanna Woods announced Sunday that the LGBT conservatives forum at the Desert Star Playhouse, scheduled for Friday, Sept. 6, had been canceled. In an Instagram video, the Lady MAGA creator claimed that the theater pulled out at the last minute. A Desert Star employee confirmed to City Weekly the event won’t be happening but did not specify a reason why. At the time of Woods' announcement, the event's Facebook page showed 13 people planned on attending, with 23 others "interested" in the forum.


After making a direct appeal to a laundry list of conservative personalities, commentators and media outlets—including Fox News, Breitbart and President Donald Trump himself—Woods proceeded to ask for support in finding a new venue, assuring the forum is still on, “no matter what.”