A re-watch of A Fantastic Woman yields something less than a "best of the year" candidate. 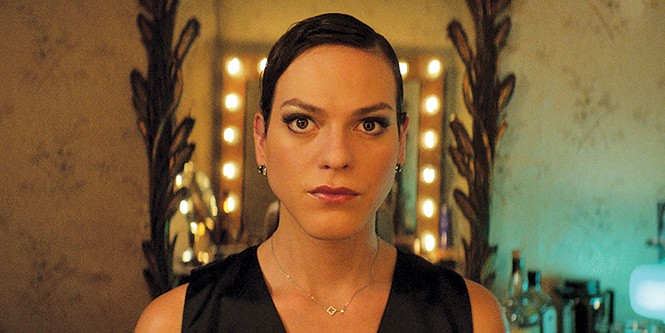 Awkward things can happen between the first viewing of a film and the second viewing. For example—and I'm just spitballing here—you could put it on your list of the year's best films, only to discover that maybe it's not quite that great.

Such is the dilemma that faces me with regard to A Fantastic Woman, co-writer/director Sebastián Lelio's Oscar-winning Chilean drama. It's the kind of story that delivers a visceral impact as its unfolding for the first time, anchored by a mesmerizing central performance. But when you know what's coming, parts of the structure begin to crumble, and some of the filmmaking choices feel clunky rather than potent. It starts to feel less like a great movie than like a kind of movie that you want to be great.

Its protagonist is certainly one that's rarely seen on screen: Marina Vidal (Daniela Vega), a transgender woman who works as a waitress by day and sings in a hotel lounge by night. She's in a happy relationship with an older, divorced man, Orlando (Francisco Reyes), but her world crumbles when Orlando dies suddenly from an aneurysm. And in case the grief wasn't enough to disrupt her life, Orlando's ex-wife and children want to erase Marina from their lives, including making it clear she's not welcome at the memorial service.

It's a powerful thing seeing an actual transgender actor tear into a performance the way Vega does here, not fishing for the plaudits cisgender actors almost invariably get for the "brave" transformations they undergo to play trans; just look at 2015, when Eddie Redmayne scored an Oscar nomination for The Danish Girl while Tangerine's Kitana Kiki Rodriguez and Mya Taylor remained on the awards sidelines. Vega conveys a ferociousness built on living under perpetually judging eyes, and understanding the continuum of aggression from uncomfortable glances to overt physical assault. Lelio captures Vega's almost imperceptible flinch when Orlando's ex-wife calls Marina by her male dead-name, recognizing the sting of someone's refusal to recognize you. And in one of the most powerful sequences, Marina—who has not had any top or bottom surgeries—visits a sauna in hopes of finding something left behind by Orlando, her ability to "pass" as male in the men's locker room providing a reminder of her strange place in the world.

All of this makes A Fantastic Woman a compelling glimpse into the life lived by a transgender woman—except that it's such a narrow window on that life. What emerges in a second look, after the initial gut-recoil horror at the many indignities Marina faces, is what a fine line A Fantastic Woman walks between exploration and exploitation. From the physical confrontation with Orlando's son, to a police station physical examination that requires her to strip naked, to being abducted by Orlando's family members because she dared to show up at the memorial, Marina's life becomes an almost relentless string of transphobic incidents. Of course it would be absurd to suggest transgender people don't face such hostility on a daily basis; it's just that this narrative packs so much hostility into its tight narrative time frame that it defines Marina too much by her victim status, rather than through the entirety of her life experience.

Lelio does at times try to leaven the sting of A Fantastic Woman with fantasy sequences offering another glimpse into Marina's state of mind, like a walk into a high wind that turns into something out of a silent-era comedy, or a choreographed dance in a gay nightclub. There's also the ever-present reminder that this is a love story, through the post-death visions Marina continues to see of Orlando, and a lovely slow dance to Alan Parsons Project's "Time." Yet Lelio also goes a touch overboard with the motif of mirrors; it's clear that the physical body Marina sees doesn't match the identity in her head the first three or four times. Vega's performance allows the film to dodge the perception that Marina is simply an object of pity—the triumphant final scene makes that clear—but the return journey toward that ending is bumpier than it was the first time around.