Sorting Out Race finds in a thrift store the stereotypical imagery that has surrounded Americans for decades.

Sorting Out Race
The Leonardo
209 E. 500 South
Through April 14
theleonardo.org for health & safety and ticketing info 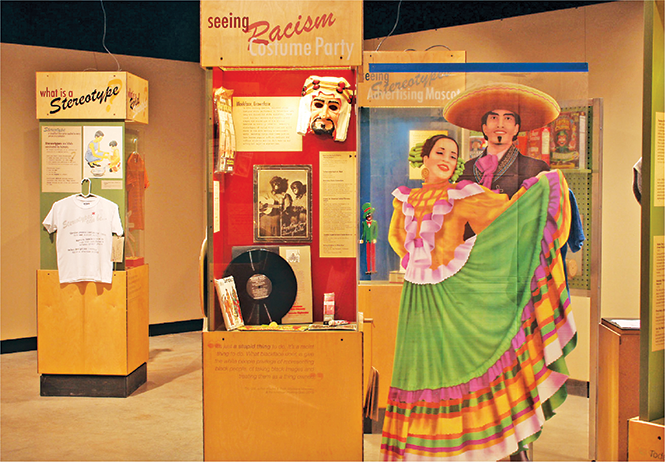 American culture has been steeped in racism since the nation's inception, manifesting over the decades in myriad harmful ways. Among them are cultural and racial representations in consumer products, which have only recently started to see changes in areas like professional sports team mascots and brand names. Yet items representing this legacy still exist, making their way from homes into places like thrift stores—which unexpectedly led to a traveling exhibition now making a stop in Salt Lake City.

Sorting Out Race was developed by the Kauffman Museum at Bethel College in North Newton, Kansas, in 2014, but it was born initially out of one individual's discomfort. According to David Kreider—museum technician for the Kauffman, and the fabricator who installed the exhibition for its current visit to The Leonardo—the manager of a North Newton non-profit thrift store had begun to identify objects coming through the store that she felt uncomfortable selling. They were items that traded on stereotypes, like Halloween costumes built around racial or ethnic identity, or clothing and housewares that included problematic representations of race and ethnicity.

"She started pulling those [items from their shelves]," Kreider says. "She knew that we developed traveling exhibits, so she came to our director and said, 'This is what I've been doing. What should I do with them?'"

Rachel Pannabecker—the director of the Kauffman Museum at the time that the exhibition was developed, now retired—notes that while the exhibition began with and still largely represents the inventory from one small-town thrift store, it was possible to develop a narrative that spoke to the country as a whole. "It's true that all artifacts in the exhibition were sourced locally," Pannabecker says. "But all the artifacts represent the mass manufacture, mass distribution and mass marketing of American material culture that took off in the last quarter of the 19th century. Even 'homemade' items ... were likely created from patterns published in national magazines or purchased at five-and-dime stores. The exhibit team hoped that gathering these artifacts together would enable visitors to acknowledge the pervasiveness of racial stereotypes and to ask, 'What do I have in my home that perpetuates racial stereotyping?'"

Pannabecker adds that while curators for the exhibition did expand their search for artifacts beyond that one initial thrift store, the exhibition's items do in some way speak to the specifics of the local demographics. Since the museum is located on the Great Plains, Native American representations like the "noble savage" or "Indian princess" are more likely to be present, with fewer items dealing with Asian or Middle Eastern stereotypes.

Sorting Out Race has been touring since 2015, and comes to Utah as the result of a new partnership between The Leonardo and the Utah Black Chamber. James Jackson III, founder of the Utah Black Chamber, notes that the exhibition stood out for him in the way that it encourages discussion about areas that aren't often openly addressed, despite their pervasiveness. "When you think about the imagery, particularly in the marketplace—Aunt Jemima, Uncle Ben—it's been around forever, but not necessarily part of the conversation," Jackson says. "Here are things that still exist today, but we've kind of swept under the rug, and not had a conversation about."

As part of the exhibition locally, that conversation will also include a series of community panels led by Jackson and the Utah Black Chamber. Among the remaining topic areas are "Stereotypes and Pop Culture" (March 16), "White Privilege Explained" (March 20) and "Systemic Racism: Healthcare, Housing, Education, and the Corporate World" (April 13).

Marissa Day, creative director for The Leonardo, says that what surprised her most about the exhibition is how many of the items included were of relatively recent vintage. "A lot of the artifacts are not from decades ago," she says. "They're from the '80s, '90s or even more recently. This isn't representing some bygone era. ... Most of us assume we are aware of what kind of representations we're consuming, and this is a good reminder that we always need to be thinking critically about what we're seeing."

While Sorting Out Race has been touring for more than five years—including a hiatus during the pandemic—Jackson does believe that there's a particular power to an exhibition like this coming in the wake of last year's social unrest addressing systemic racism. And he believes that there is a connection between that activism and recent high-profile actions like the changing of the Aunt Jemima brand, or the elimination of racially-based mascots for professional sports franchises.

"Unfortunately, sometimes it takes a crisis to build character, to grow us," Jackson says. "It seems to be the way that America has always been built: In the midst of dire circumstances is when we finally learn. Now that you're listening, let's share with you what we've been trying to say all this time."

The Return of Music