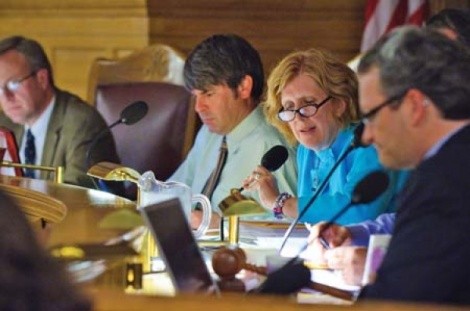 Mormons and non-Mormons alike were taken by surprise when on Nov. 10, The Church of Jesus Christ of Latter-day Saints officially pledged support for two Salt Lake City nondiscrimination ordinances. This was after a year (post- California Proposition 8) in which gay-rights activists amplified their criticisms of the church’s stance on homosexuality.

Until recently, no one in the gay community had been willing to discuss the meetings for fear of offending the church and ending the dialogue. Those fears linger, but details have trickled out.

When asked about the meetings after the Nov. 10 Salt Lake City Council decision, Dabakis admitted the secrecy of the meetings is important because he fears too much disclosure could end the “fragile friendship” between the Gang of Five and the church. He said it felt “horrendous” keeping the secrets but was doing it out of respect for the church.

“It wasn’t really secret ... well, it kind of was,” Dabakis said. “I think when you are starting a friendship or starting a relationship ... you don’t go out and start blabbing about it.”

Seed said the topics of discussion were delicate: The gay individuals discussed stories of discrimination while church representatives discussed how hurtful Temple Square protests are. Those types of emotional talks, Seed said, were shielded from the media, which could have misconstrued them. “Just think about it: Here they [LDS officials] are sitting down and talking with me and other folks, and I’m a person who organized a protest event in front of their church.”

Multiple calls to the LDS Church seeking comment were not returned.

Other gay-rights activists said protests against the church may resume.

KRCL radio producer and activist Troy Williams, a gay former Mormon, said legendary gay-rights activist Cleve Jones called him to say, “Be gracious about this one moment.” While Williams expresses gratitude for the church’s support of the ordinances, he’s got his bullhorn ready if the church again runs afoul of the gay-rights movement. He believes the backlash the church has experienced since Prop. 8 prompted its support of the ordinances. That negative attention has included multiple protests, satirical plays like the The Passions of Sister Dottie S. Dixon, which Williams co-wrote, and even a segment on The Colbert Report that focused on City Weekly account manager Derek Jones and his partner, Matthew Aune, who were detained by church security for kissing on the Main Street Plaza.

The forthcoming documentary 8: The Mormon Proposition will keep the negative pressure on by featuring sources that argue many anti-gay marriage groups are mere fronts for the LDS Church. Its debut is not scheduled.

Williams says. “Their endorsement was a direct response to the onslaught of negative press they’ve received over the last year.”

Jacob Whipple, also a gay former Mormon, organized the state’s largest gay-rights march in history— around LDS Temple Square, no less— in November 2008. That protest was intended to shame the church for its support of the anti-gay-marriage amendment Proposition 8, which was approved by California voters.

“There’re a lot of worries that this is a one-time deal with the LDS Church, [inspired by] social pressures and negative media impacts. The church is trying to get some good press and this is one way to do it,” Whipple said. Whether the church supports other measures—like state- and nationwide employment nondiscrimination laws— will show whether its support was a public relations stunt or a true change of heart, he said.

Dabakis emphasized that the meetings with the Gang of Five in Salt Lake City were just one of “multiple meetings in multiple places.”

Duane Jennings, a member of Utah’s chapter of Affirmation, a gay Mormon support group, confirms that other groups are in talks with the church. Affirmation was snubbed in August 2008 when the church canceled its meeting with them and did not reschedule immediately. However, Jennings says, Affirmation’s national leadership is now meeting with LDS Family Services.

“During our national conference that was [in Salt Lake City] in September, the [Affirmation] leadership was here. In discussions, they mentioned they had had some dialogue happening with [LDS] Family Services. So, that has been taking place,” he said.

Those meetings are also being held quietly, to please the church. “They will continue to be discreetly done as long as some kind of progress is made,” Jennings said. “[The LDS Church] has never been a big one to let other people know who they’re speaking with and on what subject, unless it becomes politically useful.

They want to look like they’re defending their theology. One interpretation would be that there has been continual negotiation on theology.”

Others believe private conversations in Mormon households have had more efficacy than public demonstrations. Equality Utah executive director Brandie Balken, who declined to speak about her involvement with the Gang of Five, said many Mormon families have LGBT members, and that prompts disparate, but important dialogue across the global Mormon realm.

“It’s important to acknowledge that far beyond protests that occurred, beyond any press, I know there were private, earnest conversations that occurred in many, many homes,” she said. “You could frame that as pressure, but in some ways, there’s a much greater piece that is understanding.”

Jennings agrees that individual church members have had a huge impact. He claims to have first-hand knowledge of hundreds of LDS members who have written the church or become inactive because of the church’s stance and actions on gay rights.

Jennings said the LDS Church should come out of the closet in regard to talking with gay-rights activists because there’s nothing shameful about merely discussing social progress and reforms.