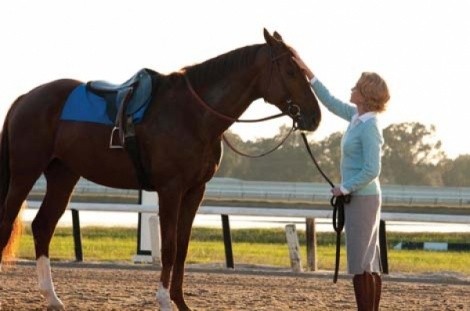 Spoiler alert: Secretariat wins the 1973 Triple Crown. Not that there’s generally any surprise when it comes to formulaic underdog sports movies like Secretariat; the big cheer at the end is the only reason we’re here in the first place. And the only reason to sit through everything leading up to the big cheer is a hope that the story told along the way is reasonably compelling.

But very little about director Randall Wallace’s version of the story steps beyond the gently dramatic. In 1969, we see housewife Penny Chenery Tweedy (Diane Lane) taking over operations of the family racehorse-breeding business after her mother dies and her father (Scott Glenn) is too stricken with dementia to handle his affairs. A lucky coin toss with a millionaire horse owner (James Cromwell) lands Penny the foal from a pairing she thinks could result in a unique combination of speed and stamina. Guess who that foal grows up to be?

The bulk of the conflict comes from Penny’s clashes with the racing establishment that doesn’t know how to deal with a strong woman, as well as Penny’s internal struggles over taking so much time away from her family. But this tale is too determined to be inoffensive to really dig into the tough issues of its time period, and Lane—while always an appealing actor—simply never does anything with the role beyond shoulders-back, chin-up determination.

Thank goodness for John Malkovich as Secretariat’s French-Canadian trainer Lucien Laurin. No one plays surly and put-upon quite like Malkovich, and he’s at least fun to watch while sporting Laurin’s trademark louder-than-bombs wardrobe. That’s really the only fun to be had while Wallace struggles with the inherent challenge of how to film horse races so they makes cinematic sense. Nobody’s waiting to be surprised by the ending, so the beginning and middle need to offer a bit more than this.