See How They Roll 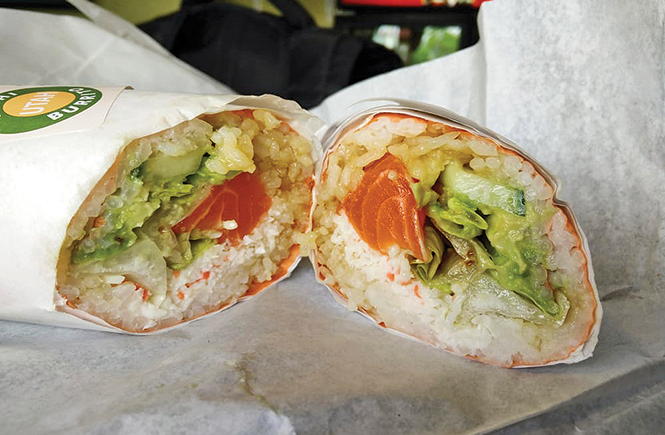 Though Utah was a bit late in the game regarding sushi burritos, we were quick to adopt them once the trend made its way to our boundaries. Now that this hybridization of two unlikely takeout superstars has been fully incorporated into our local dining scene, I think it's time to recognize the sushi burrito as one of the greatest achievements in the last decade of American culinary history. They've opened sushi up to different audiences, fostered flavor innovations that wouldn't exist otherwise and, most importantly, made it possible to eat sushi while driving a car. With takeout dining still occupying a high priority, now is as good a time as ever to dig into our sushi burrito offerings—here are a few places that know exactly how to roll.

Sushi Burrito on 8th (180 E. 800 South, 801-995-0909, sushiburritosaltlakecity.com): My first foray into the world of sushi burritos took place here. I remember seeing the promotional signs for this restaurant going up after Guzzi's Burgers closed, and marveling at the idea's audacity. It's one of those notions that is so good yet so simple, you wonder why no one had thought of it before—what is sushi, if not a burrito sliced into smaller pieces?

Sushi Burrito's menu includes combinations that any sushi fan will want to dig into, but my personal favorite is the citrus ($9.49). It's a massive roll filled with salmon and crab meat along with avocado, cucumber, eel sauce, ponzu sauce and sliced lemon. I've always been enamored with the vibrant flavor that thin slices of lemon bring to a sushi roll, and this one doubles down on those flavors with the ponzu sauce. Every bite of this beast offers the acidity of fresh lemon and vinegary ponzu, which enhances the flavors of the salmon and crab therein.

When I'm after something a bit less subtle, the Salmon Bomb ($9.49) is usually where I land. It swaps out raw salmon for grilled, and adds crispy bacon to the mix. Cabbage, lettuce and carrots add to the crunchy texture, and the eel sauce spikes the whole affair with a nice, unctuous dose of concentrated sweet and salty flavor.

Nagoya Hibachi and Sushi Burrito (9105 S. Redwood Road, 801-565-0909, nagoyautah.com): Sushi burritos only occupy one section of this West Jordan restaurant's menu—a stacked selection of traditional sushi rolls, poke bowls and Chinese American favorites is also available—but they're by no means a second thought. The monarch of Nagoya's sushi burrito kingdom is simply known as the Monster ($12.99), a name that gives you a sense of what you're getting into once you've placed your order. It's stuffed with lobster, crab, tobiko, cucumber, lettuce, sliced lemon—yass queen—eel sauce and spicy mayo. It's got a decent amount of lobster inside, and the spicy mayo adds just the right amount of kick. If you haven't tried this one already, make sure it's on your list.

While more akin to Spam musubi than sushi, Nagoya's Maui burrito ($9.79) is another excellent entry on the menu. It's something most sushi burrito places offer—perhaps because the traditional Hawaiian snack lends itself nicely to a sushi roll—but this one stands out because of Nagoya's spicy mayo. With the option to get most sushi burritos in their stellar selection deep fried and a vast menu of additional entrees at their disposal, Nagoya is one of the more versatile sushi burrito joints in town.

SM Sushi (3949 S. Highland Drive, 801-849-0647, smsushi.com): A bit of an upstart in the Utah sushi burrito scene, SM Sushi balances its menu with traditional and burrito-style rolls. It's got one of the best fishless sushi burritos around with the New York Burrito ($11.99), which combines fried chicken and grilled beef with mayo, avocado, cucumber and asparagus. It's a satisfying combination of Latin American flavors; the chicken and beef combined with mayo and avocado veer close to arepa territory. It's a leap from the sushi burrito formula, but delicious nonetheless.

If you're a fan of spicy sushi, the Kabuki ($11.99) has your number. Not only does it combine the holy trinity of sushi proteins—tuna, salmon and yellowtail—it's rolled up with jalapeño peppers, sriracha and spicy mayo. The avocado and mayo cool things off a bit once you're halfway through, but this one is designed to set fire to your mouth.

For me, SM Sushi's mainstay will forever remain the Rock 'N Roll ($11.99), which is a combo of eel, tuna and tempura shrimp with tobiko and cucumber. It's a classic arrangement of traditional sushi flavors, and SM Sushi preps it just right every time.

All three of these restaurants exemplify the cultural significance of the sushi burrito along the Wasatch Front, and I'm grateful for places that let me satisfy my sushi cravings with a takeout mindset. If you've never experienced the fresh-tasting joy that comes from pounding a gigantic sushi burrito, it's time to roll out to one of these local favorites.