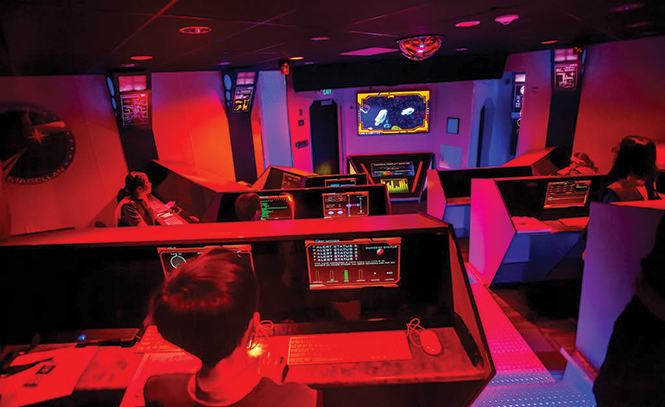 Unless you grew up in the Pleasant Grove area, there's a pretty good chance you've never heard of the Christa McAuliffe Space Center. I only learned of its existence a few years ago—my wife and her siblings went to elementary school in Alpine School District, where they got to participate in school-sponsored Star Trek simulations. As I was just north of Utah County, I was rather bummed that my sci-fi-loving childhood self didn't get to share this experience. After a few conversations about how fun it would be to get our current Dungeons & Dragons group together for a five-hour voyage, we made the decision to boldly go at the beginning of this year. Our experience was a nerdy good time. With the escape room craze in full swing—specialty site roomescapeartist.com estimates there are currently more than 2,350 in the country—and geek culture enjoying its own kind of renaissance, the CMSC's crew-based simulations feel more relevant than ever.

The center opened in November 1990 after Victor Williamson, a teacher at Central Elementary School, devised a simulation-based approach to teaching his students about the solar system. "Originally, students were using paper controls and yelling out how fast they were going," CMSC Director James Porter says. "Mr. Williamson would hide behind his desk and speak as if he was the computer." After seeing the impression that such a collaborative approach left on his students, Williamson started to wonder just how far he could take this idea. "He wrote some grants and created the Voyager as an addition to the school, and that's when the Space Center became a reality," Porter says.

The fact that the center resides inside Central Elementary—which still functions as a public elementary school—somehow adds to its nerdy charm. My group and I arrived on a Saturday afternoon, many of us not knowing what to expect. Once we were welcomed inside, the flight director—a combination of dungeon master and live-action film director—guided us into the Space Center proper, which is designed to look like a starship ready room. LED lights twinkled within their terminals and Starfleet insignias decorated the walls as we took our seats for a mission briefing.

Considering the fact that the CMSC runs missions for several different age groups and purposes, the job of flight director comes with a fair set of challenges. The director's role is to make sure that each group has a good time while ensuring that their simulation teams respond quickly to certain adventure cues or crew questions. Seasoned directors Jon Parker and Natalie Anderson say these challenges are among the best parts of the job. "My favorite thing is when I see a crew's plan come together," Parker says. "When I tell them they've completed their mission and hear them erupt in screaming and cheering, that's what I like best."

Of course, when you're helming a two- to five-hour mission for a group of complete strangers, there are bound to be a few obstacles. "By the time we start the mission, I've only interacted with the crew for around 30 minutes, and I try as hard as I can to make observations and learn what the crew dynamic is," Parker notes. "Crews that aren't cooperative or think they have the answers to everything can shoot themselves in the foot a lot of the time." Once the mission starts, the flight directors are in charge of setting the pace and throwing the occasional curveball to spice things up. "There are an awful lot of things happening at once," Anderson says. "When you're behind the scenes, you're in charge of every single thing—lights, music, computers—happening outside of the crew's decisions."

In addition to the more challenging aspects of the job, both flight directors have seen social miracles happen within certain missions. Flight director Anderson relayed an experience in which a shy girl struggling with self-esteem started a mission thinking she would be a failure, but a bit of encouragement from her crew and a successful navigation through an interstellar Oort cloud left her feeling confident and respected. "Even though we don't get to work with these kids for that long, we know that we're making a difference," Anderson says. "We help these kids who maybe aren't super popular find a community here, and we have these departments that help them learn about writing or programming. It's really fulfilling in a lot of different ways."

It's also the flight director's job to assign different roles to the crew and teach them how those roles impact the mission. On our sojourn, I was in charge of the ship's external sensors and alerting the captain to any incoming transmissions. Each role can be boiled down to an essential function, the accomplishment and communication of which is what ultimately ensures a mission's success. Ushered onto the bridge of the USS Voyager, each member of our crew was seated at a console with a computer designed to aid us in whatever our roles were. We even had a few security officers armed with light-up laser guns just in case things got dicey—which they did. We were glad to have a bit of muscle when our bridge was stormed by a contingent of hostile separatists.

I was surprised to learn that all of this tech—view screens, alert lights, computer software—has been created in-house. "That's what we call 30 years of experience," Porter says. "When we started expanding, we needed things like sound systems and lighting, and now we're getting to a point where our software is controlling our lighting." The illusion of helming a starship was surprisingly arresting, especially when you realize that all of the bells and whistles around you were created and purchased with the funds that the CMSC generates from its events and field trips.

This spirit of sustained progress has carried the CMSC to new heights since 1990, and this year is fixing to be pivotal in the organization's history. In June, the CMSC will move to a brand new planetarium that will be near the grounds of the newly rebuilt Central Elementary. "Our planetarium will be the second-largest in Utah, just after the Clark," Porter says. "We've also increased the Space Center's size by 50%. We have four ships now, but we'll be expanding to have six." This expansion comes from a mixture of school district aid and fundraising, along with countless volunteer hours and community sponsorship.

Whether you're visiting before or after the CMSC sets up in its new digs, there are a few things that first-time visitors should know. "I like to tell crews to take the mission seriously, but not to take themselves seriously," flight director Anderson says. Based on my visit, going with the right group will make or break your experience—this was one of the reasons going with people with whom I've played D&D was a good call. Chances are if you and your buddies dig science fiction and role-playing games, this is an excellent way to spend a Saturday. Just make sure to leave anyone who regularly imbibes the hater-ade at home—there's no room for people who think they're too cool to save the universe.

After spending an afternoon completing various objectives and keeping the cosmos safe from intergalactic terrorists, I walked away from the CMSC happy that it's here and even happier that it's expanding. Much like the Starfleet of Gene Roddenberry's imagination, it's an organization that lets knowledge, cooperation and equality guide its progress into the future.