Maiden celebrates women refusing to stay where they're told they belong. 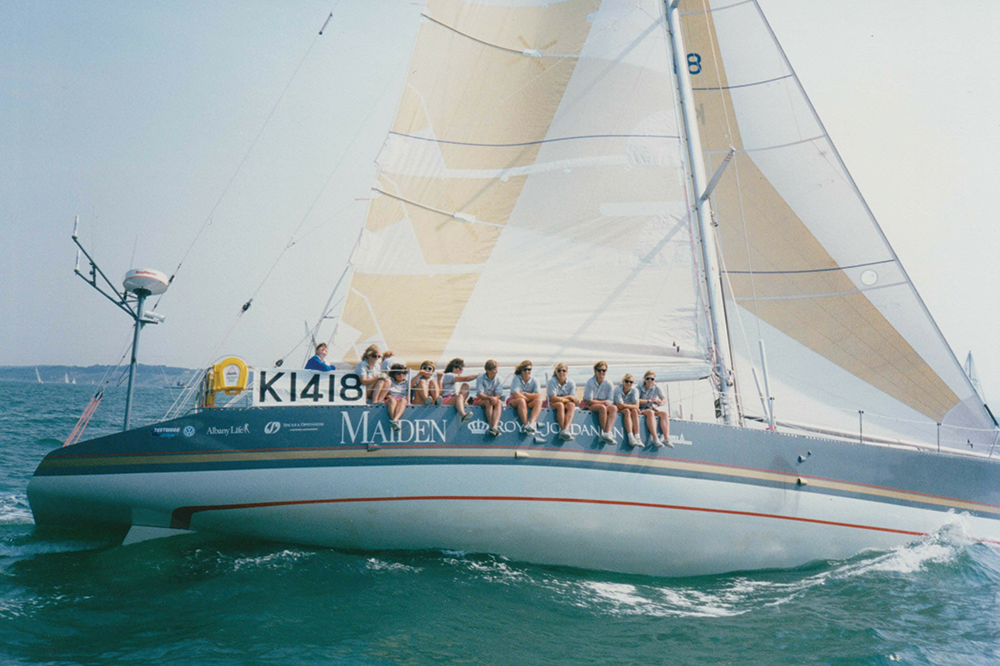 No woman had ever served on a racing yacht competing in the Whitbread Round the World when, in 1989, 27-year-old Tracy Edwards decided that that was precisely what she wanted to do. But no crew would take her on: Women were bad luck, went the conventional wisdom, or too much of a distraction, or some such bullshit. So she said, "Screw 'em," and startedher own crew—an all-female one. Her team became the epitome of that apocryphal Gandhi quote: "First they ignore you, then they laugh at you, then they fight you ..."etc.

Does the crew of Maiden—the documentary takes its name from Edwards' boat—win? I'll leave you to find out—which you should do, because this new documentary about Edwards and her stupendous, groundbreaking,misogyny-busting effort is simply terrific, whether you're into yachting or not. British filmmaker and BAFTA winner Alex Holmes crafts a riveting tale from archivalfootage and new interviews with Edwards and others. A festival favorite around the world, Maiden is as beautifully modulated as fiction; it's full of twists and turns anddelicious ironies, and it even sports a perfect ending. Yet it's all true. (This is so perfect a story that it is surely destined for a narrative retelling.)

Part of what we see here is a stunning reminder that, even today as we continue to push back against outrageous sexism, we have indeed made some progress in thepast 30 years. The endless barrage of Edwards and her crew of grown women being called "girls" here, over and over again, bysports journalists and TV hosts and the like, is appalling. (No one would call men their age "boys.") Things don't feel quite that bad today. But the way Edwards andher team were treated apart from that isn't very different. They were dismissed and ridiculed, diminished and underestimated at every turn. "The further we got," Tracysays today, "the nastier this stuff would get." That is sadly still very timely, as way too many vile reactions to the behavior of America's women's world-champion soccerteam just infuriatingly demonstrated.

But still, the fact that it was seemingly not at all difficult for Edwards to assemble a crew of women eager, ready and willing to put their lives on the line for glory and adventure—women who were extremely experienced yachtspeople—speaks to all the untapped talent that had been going unappreciated; Edwards was not remotely an outlier in her desire to race the Whitbread. There is an unspoken yet undeniable underlying message to Maiden that women's knowledge, enthusiasm and expertisewere—and continue to be—wildly underutilized. We are squandering the capabilities of half the human race.

Side note: One element of Edwads' story slips by in the telling: When she was, because of pure sexism, unable to find corporate sponsors,and hence raise the money needed to build a boat, she decided to buy a used one and refurbish it. The money needed for this? She remortgaged her home. She was a young woman without a high-paying career—barely even much work, as far as we can see—and she was able to buy a house. What an incredible fantasy thatwould be today.

Enormously heartening here, though, is the portrait of Edwards and her teammates as women relishing physical adventure, courting danger on killer seas that was, theyrecall today with glee, "absolutely exhilarating." They talk of anxieties and "horrendous flaws," but also of pushing past those, of challenging themselves to go to theirlimits and beyond, of proving themselves not only to the world at large but—perhaps more importantly—to themselves as well. We have so few female role models like Edwards and her crew, so few women who tell us it's okay to doubt yourself and follow your dreams anyway, whose stories tell us that to try and perhaps fail isbetter than not to try at all. Maiden should be taken as a massive inspiration to girls and women—and for boys and men, too.