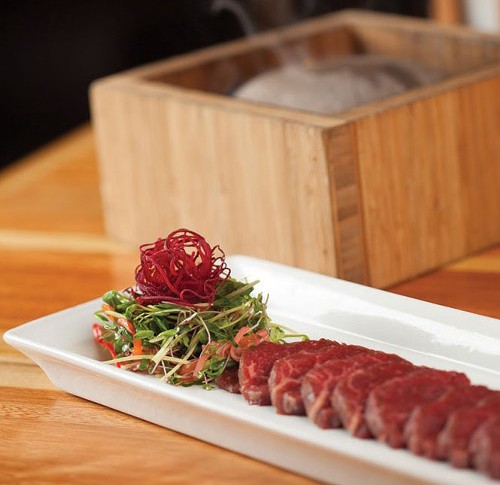 With the ability to have just-caught fish and seafood delivered post haste from far-flung places like Hawaii and Japan, being in landlocked Utah is no longer a hindrance to enjoying sushi that's as fresh as any you'd find on either coast. Even in a mountain ski town like Park City, superb sushi flourishes.

Two of my favorite Park City restaurants for sushi, sashimi, nigiri and other Asian-inspired dishes couldn't be more different from one another. Shabu, in Old Town, is fairly large, with stylish décor, a patio in warm weather, a full bar and an extensive menu; Shoyu Sushi House & Japanese Kitchen, on the other hand, located in Kimball Junction, is tiny, with more limited offerings. What both Shabu and Shoyu have in common is excellent food and service, and some of the freshest flavors I've tasted in Park City.

Back in 2004, brothers Kevin and Bob Valaika teamed up to open Shabu, a restaurant specializing in what they call "freestyle Asian cuisine." Since the beginning, the outgoing and terminally upbeat Kevin has managed the restaurant, while Bob—influenced heavily by chefs Charlie Trotter and Nobu Matsuhisa—has been overseer of the Shabu kitchen. They are a tight-knit team, as you'd expect brothers to be.

Like the restaurant's name implies, shabu shabu ($27-$32)—an Asian hot-pot meal—is one of the highlights here. It's a DIY dish where diners order a customized bento box filled with a choice of veggies and proteins such as tofu, chicken, beef, seafood or a combination of favorites. There's also a choice of broth: vegetarian, Thai coconut, or traditional (ramen-style), plus fresh noodles. The bento ingredients are dipped into the steaming hot broth at the table, and then noodles are added, making for a satisfying soup.

As delightful as the shabu shabu is, it's not my favorite offering at Shabu. I'll get to that in a moment. First, I'd be remiss if I didn't mention some of the exceptional sushi. An absolute must, for me, is the Yellowtail jalapeño "cold plate" ($22). It's a dish with origins from Nobu, where Bob Valaika spent time in the kitchen: eight thin yellowtail sashimi slices formed pinwheel-style to look sort of like wagon-wheel spokes, topped with slivers of jalapeño pepper, tiny dollops of hot sauce and garnished with cilantro leaves, all luxuriating in a scrumptious citrusy yuzu-soy bath.

Another Shabu sushi favorite of mine is the Coco Loco roll ($19). Avocado, cucumber and albacore tuna is wrapped in rice and Thai basil, then topped with slices of salmon and maguro tuna, along with more avocado slivers and tobiko, then finished with wasabi-coconut aioli. The lip-smacking aioli delivers a beautiful blend of sweet and heat to the proceedings—a truly exceptional sushi roll.

The best menu item at Shabu, in my opinion, isn't just my favorite Shabu dish; it's one of the best things I've ever eaten anywhere: the Wagyu beef hot rock ($23). Its simplicity and sensational flavor blew my mind. Thin slices of premium Snake River Farms Wagyu beef strip loin come to the table raw, along with ponzu butter. A blazing hot rock (I think it's about 850 degrees F) is delivered to the table in a wood container. You simply dip the beef slices into the ponzu butter, rest them on the red-hot rock for a few seconds, and then allow them to melt in your mouth. The flavor is nothing short of spectacular, yet it is so simple; less is more. Order the amazing blistered green beans with spicy miso ($11) to share on the side. And, for the ultimate Wagyu hot-rock experience, there's also certified Japanese Wagyu available for $50.

Meanwhile, at The Junction, Shoyu restaurant is a place that many sushi aficionados would like to remain a secret. That's because it's a diminutive eatery that fills up quickly: just five four-top tables, two two-tops, and six sushi-bar seats. Plus, the prices are remarkably low for Park City. I've heard that, despite its size, service can get bogged down since there's typically just the owner, "Hoki," and an assistant making sushi and hot food, plus one server. However, I've never had any problem with slow service at Shoyu. Your mileage may vary.

Cucumber lovers will enjoy the Sunomono salad ($5) at Shoyu. It's a straightforward dish of Japanese cucumber (kyuri) served with ponzu. Another tasty vegetarian-friendly appetizer is chilled tofu ($5), a light serving of soft, airy Japanese tofu with bonito flakes, radish sprouts, ginger and ponzu.

Most of the nigiri at Shoyu is priced at $5 or $6 for two pieces. I was happily surprised by the thick, generous slices of hamachi, maguro and saba with the nigiri I ordered. This is definitely "two-bite" nigiri. It comes unadorned, with nothing more than ginger, wasabi and soy alongside. If you've always wanted to try uni (sea urchin) but were scared off by the cost, order some at Shoyu, where it's a mere $7, when available.

I don't know the significance of "88," but the 88 Roll ($13) is outstanding. I tend to like maki rolls where the fish, rice and other ingredients are the main attraction, not rolls smothered in too much sauce. Well, the 88 Roll fits the bill perfectly: wedges of avocado and albacore tuna with sushi rice, wrapped simply in strips of fresh escolar with just the slightest hint of ponzu citrus sauce. It's a perfect example of how simple and sensational sushi can be. But, shh! Don't tell anyone.