Shake Up Some CHEER

Our 12 drinks of Christmas for homebound party people

¨We need a little Christmas. Right this very minute," has never been more true than in 2020. And yes, a little Hanukkah and Kwanzaa would be nice as well.

In a year of a surging pandemic, economic uncertainty, protests and political unrest, dashed hopes for travel and socializing and—locally—an earthquake and windstorm for good measure, why wouldn't we be seeking comfort and cheer? This is the year that's given rise to day-drinking in home offices, the "quaran-tini" and Zoom cocktail hours.

And, while there's light at the end of the tunnel, we remain stuck in amber for this holiday season, awaiting an end to COVID-19. Let's face it, such news calls for grog—and lots of it. To that end, we've dug into past issues of our sister publication Devour Utah and found drink recipes created by local bartenders and food writers perfect for the season. Thumb through our pages, make a list of ingredients and then visit your local liquor store to stock up.

Make it goal to amaze yourself and other adults under your roof with a festive cocktail (or two ... or 12) in honor of the season. Many can be crafted sans alcohol for the non-imbibers under your roof. The good news is you're already at home, so no need for a designated driver to enjoy these beverages—and all in moderation.

We hope you find ways to mark the season and make it a merry one. We've all earned it this year.

The beautiful bar and lounge at Stoneground Kitchen is the perfect place to enjoy a celebratory craft cocktail such as the Stone Spice Pear. Created with the chilly season in mind, this cocktail combines:

The savory notes will make you want to put on a warm sweater and cozy up next to a fire, but the topper of brut Champagne makes you want to celebrate late into the evening. Easy to sip and the perfect soul warmer, this is "the" cocktail to enjoy on a snowy evening with great conversation! (By Chelsea Nelson, November 2015) 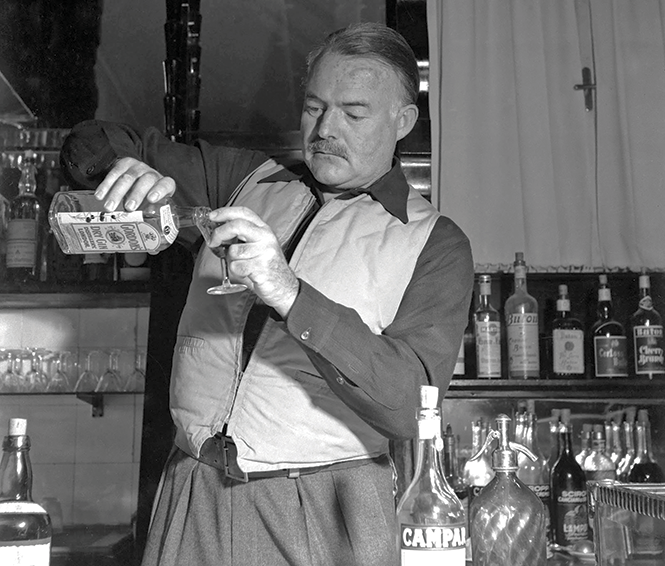 "I drink to make other people more interesting," is probably the most on-the-nose of Ernest Hemingway's attributions. Famous as much for his written words as for his larger-than-life persona, bars from Havana to Paris laud Hemingway's drinking legacy in the form of quotes, recipes and accumulated cocktail-related ephemera.

His first major novel in 1926, The Sun Also Rises, chronicled hard-drinking, absinthe-fueled exploits of jaded American and British post-WWI expatriates in Spain and France. On the advice of a friend and fellow "Lost Generation" ex-pat in Paris, Hemingway was encouraged to visit Cuba and Key West, Florida—places that appealed to his gusto-driven lifestyle and fascination with unique environs and character-rich people.

When I visited the Hemingway Home in Key West years ago during a trip retracing Hemingway's sport-fishing haunts, I was as much captivated by the challenging fly fishing as by the polydactyl (six-toed) feline inheritors of his estate and, of course, the region's citrus-forward cocktails.

My go-to Hemingway staple was influenced by his many years visiting and living in Havana, Cuba: the Hemingway Special Daiquiri aka "Papa Doble," as it's called when served as Hemingway ordered: double strength.

To a shaker filled with ice, add all ingredients. Shake until tin is frosty, strain into a coupe glass. Garnish with lime wheel.

3. Charles Dickens' Rum & Cognac Punch
Perhaps one of literature's greatest proselytizers of punch, drinks historian David Wondrich says Charles Dickens was "known among his friends for his ritualized performance as he worked up a bowl or jug [of punch], complete with running commentary on his ingredients, techniques and progress." Dickens generously shared his popular punches with friends far and near, including this recipe for a highbrow hot rum-and-cognac punch that he sent to an in-law, Amelia Austin Filloneau, in 1847.

Dickens recommended decanting this punch into a large stoneware jug and setting it next to a roaring fire so that it might be served very warm. While the charm of his presentation is uncontested, modern hosts might choose to keep their punch warm in a heavy pot over very low flame or on the low setting in a crockpot.

Day 1: With a vegetable peeler, remove zest from lemons with as little of the white pith as possible attached. Reserve the peeled lemons for day two. Drop all of the zest into a lidded glass jar and add sugar. With a blunt wooden spoon or cocktail muddler smash contents until the zest is bruised and completely coated in sugar. Place jar in a dark spot at room temperature; smash the zest/sugar every few hours if possible. Within 24 hours, you should have a syrupy but still grainy jar of citrus-oil sugar (historically called oleo saccharum).

Day 2: About one hour before serving, scoop all of the oleo saccharum mixture into the slow cooker basin or heavy pan. Add the rum and cognac, stir well to combine. Using a long matchstick, carefully set the surface of the lemon/booze mixture on fire (this will melt the sugar and extract more oil from the peel). After 4 minutes, place a well-fitting lid over the basin to snuff out the flame. Turn the slow cooker on low (or put pan over low heat). Add to the pot all of the fresh strained lemon juice from the reserved lemons and five cups very hot water. If desired, add orange slices and star anise pods. When serving, ladle into cups and grate a sprinkle of fresh nutmeg over the top; add a cinnamon stick for garnish. Makes about 8 cups of punch (just under 4 pints). (By Darby Doyle, November 2017)

4. Schümli-Pflümli (Coffee With Plum Schnapps)
When Tupelo Park City pastry chef Shirley Butler described her favorite après ski beverage, Schümli-Pflümli, I was immediately hooked. With friends in Saas-Fee, Switzerland, she assembles mugs of the warming beverage slope side during ski breaks. Butler introduced me via email to her Swiss friend, Christoph Baumann, who gave me the inside scoop on this drink: "Schümli is a Swiss word for foam, and Kaffee-Schümli is coffee with whipped cream. Kaffee-Schümli-Pflümli is a specialty in Switzerland," made with plum schnapps called pflümli and served in stemmed heat-resistant cordial glasses. And it's as fun to drink as it is to pronounce: SHOOM-ly FLOOM-ly. If you can't find plum schnapps, Butler recommends substituting in plum brandy (slivovitz) or Mirabelle plum liqueur with equally delicious results. Ski buddies Butler and Baumann shared their recipe below. Makes one drink.

Add all ingredients to a stemmed coffee glass or mug, stir to combine. Top with whipped cream and chocolate shavings.

True story: The Rest's Adam Albro's first bar job was sweeping floors at a pub in Dublin, Ireland. The Utah native attended Trinity College for four years, and that was his work-in-trade gig after classes. Along with sampling many a pint o' stout, Albro learned that instead of using Irish cream liqueurs in boozy coffee, it's usually made with a strong (way more than a Utah pour) glug of whiskey, a bit of sugar and real whipped cream. "It combines two of my true great loves: whiskey and black coffee," Albro says, sprinkling a bit of brown sugar to garnish the mound of whipped cream adorning a steaming mug. He also recommends adding some amaro and a few dashes of cocktail bitters to round out and balance the whiskey. Given the time and inclination, Albro might also be amenable to critiquing your pronunciation of sláinte. He implores, "Just don't say it like 'cilantro.'"

Add whiskey, syrup, amaro and bitters to a mug or Irish coffee glass. Gently stir to combine. Pour in coffee. Top with whipped cream, a sprinkle of dark brown sugar and a Luxardo cherry.

* Rich brown-sugar syrup: Add two parts dark brown sugar to one part boiling water, stir well until all sugar is dissolved. Cool to room temperature. Store in a lidded glass jar, refrigerated, for up to one month. (By Darby Doyle, March 2018) 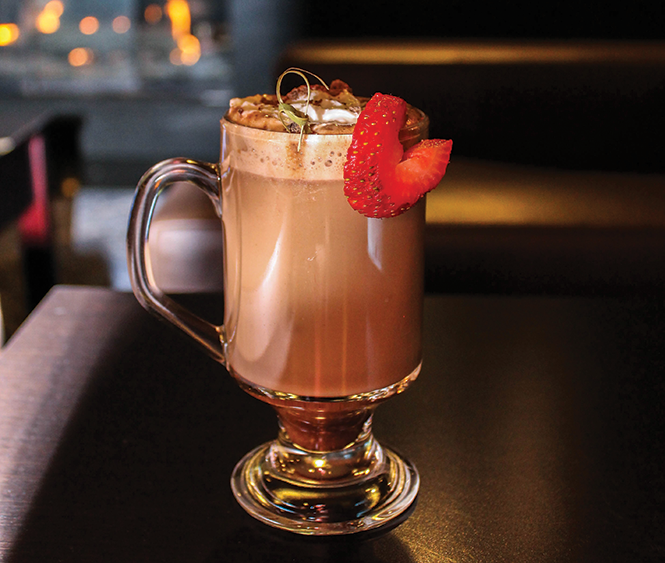 One of the marks of a tried-and-true Utah powder hound are tales about how many times they've been stuck "interlodge." When upper Little Cottonwood Canyon road shuts down due to severe avalanche danger around Alta or Snowbird, no one is allowed outside homes or resort lodges until crews blast the snowpack for pre-emptive safety.

As one of the most dangerous and avalanche-prone routes in the lower 48, we'll take their word for it when we should hunker down. In a perfect overnight interlodge scenario, we book a room at Snowbird's Cliff Lodge, and splurge on a meal at The Aerie to take the edge off our anticipation for getting first tracks the next day while the rest of the valley's powder-hungry are still itching to get up the canyon. Finish up with a sweet nightcap instead of (or in addition to) dessert in the form of this liquid version of a traditional banana split, topped with a whipped cream mountain.

Combine all ingredients in a glass mug. Add whipped cream, dust with cocoa powder and top with a strawberry slice.

Prepare cocktail glasses by swiping rim of each glass with lemon and pressing into brown sugar.

Add to glass with ice and stir well to chill, strain into a chilled martini glass. Garnish with blue cheese-stuffed olives.

9. The Jitter Bug
By Megan Wagstaff

To make hibiscus tea simple syrup, combine 1 cup of sugar and 1 cup of water in a saucepan with 2 hibiscus tea bags. Heat and stir until sugar dissolves. Allow syrup to cool before using.

Prior to mixing, peel 4 lemon twists. Juice the rest of the lemon and add to a martini shaker filled with ice. Add vodka and hibiscus simple syrup. Stir until combined. Pour into 4 chilled martini glasses and garnish with lemon twists.

In Italy, vino trumps all other drinks. From the Dolomites of Northern Italy, the Hugo (oo-GOH) is a high-altitude-tested cocktail with a German name evincing the region's proximity to Germany. Grappa tenderly muddles orange and mint sourced fresh from Bill White Farms in the bottom of a wine glass, then adds elderflower liqueur, San Pellegrino and prosecco. This popular drink is so lively, we bet you won't be able to drink just one. Saluti!

12. Glow Wine (Glühwein)
One of the most charming traditions in Germany and Austria are holiday markets that spring up in town squares through December called Christkindlesmarkt (Christ child markets) or Weihnachtsmarkts (Holy Night markets). My most recent German holiday included a trip to the sprawling Christkindlesmarkt in Nuremberg, where—in addition to buying tree ornaments and scarfing down apple strudel, savory brats and kartoffelpuffer (potato pancakes)—we stopped at glühwein stands to refill our heavy ceramic mugs with fragrant spiced wine, perfect on a chilly night (glüh means "glow").

One of the most delightful parts of making glühwein at home is its flexibility for a crowd—just assemble all the ingredients in a crockpot and set it to low/warm (not hot!) and let your guests serve themselves. If you can't find good German wine or brandy, use a dry red wine such as Cabernet Sauvignon, Shiraz or Malbec and French brandy, which make a fine substitute. Makes 10-12 servings.

Slice lemon and orange into rounds. Poke cloves into the orange and lemon slices, distributing evenly. Smash the nutmeg with a hammer or mallet; tie up in a bit of doubled-up cheesecloth with the allspice berries (or use a tea ball). Add all ingredients to a heavy pot over low heat on the stove top or pour into a crockpot on low setting to heat the wine until steaming. Do not boil! Serve in mugs with a cinnamon stick and a clove-studded orange or lemon wheel. (By Darby Doyle, December 2018)