For the 52nd consecutive summer, the Tony Award-winning Utah Shakespeare Festival will draw theater-goers to Cedar City for non-Shakespeare plays and musicals performed indoors by day, followed by the masterworks of the Bard himself outdoors at night. Here’s a guide on where to go, stay and play when you’re not taking in the theater.

We’ve also covered new developments at the festival and have tidbits of info to add to the experience, plus our take on this season’s crop of productions after seeing all six premieres.

Kathleen Curry and Geoff Griffin blog as The Travel Tramps at CityWeekly.net and host the Travel Brigade Radio Show. Follow them on Twitter @TravelBrigade.

The Play’s the Thing 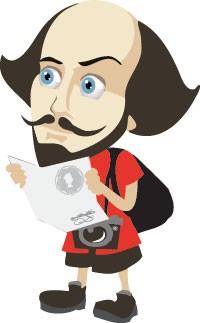 Reviews & recommends for this year’s festival.


The 2013 edition of the Utah Shakespeare Festival offers three Shakespeare plays at the outdoor Adams Theatre, and three productions of contemporary plays at the indoor Jones Theatre. The plays themselves are the thing at USF, so here’s our take on the summer season’s six main productions.

Peter & the Starcatcher
Through Aug. 31 for summer season; also presented in the fall season, Sept. 6-Oct. 8
The winner of five Tony Awards is making its regional premiere at the festival. The musical is the origin story of how Peter Pan got to Neverland and how—and more importantly, why—he became the boy who never grew up.

Quinn Mattfeld provides a not-to-be-missed performance as “The Black Stache,” the artist not yet known as Captain Hook. He finds the perfect balance of fearsome, funny and fab-u-lous in leading the cast in an over-the-top romp, while looking like Frank Zappa after raiding Prince’s closet.

The script races at a sometimes furious pace, mixed with humor ranging from fart jokes to Ayn Rand references. Director Brian Vaughn keeps the cast moving all over the stage—partly because they are the ones hauling, and sometimes even being, the props. All of that motion is so well-executed that you’ll come away believing that a rope can be a doorway, a ship’s bow or even an ocean.

Despite all of the farcical humor and madcap antics, the script still delivers a touching story that asks, “What would you want to be if your dreams came true?”

12 Angry Men
Through Aug. 31
12 Angry Men got its start on the screen in 1954 before moving on to the stage, and it’s easy to see why: It’s a very tough play to stage. You’ve got 12 guys, sitting in one room, talking about a trial the audience didn’t see. To overcome these obstacles, director David Ivers finds ways to keep the cast in motion, and makes use of the emotion running through the room as 11 jurors initially vote for a conviction in a murder trial, only to be upset that the 12th won’t go along.

The 12 characters live up to the play’s title by showing that, in a time gone by when personal and family pride meant everything, any insult required a response of a threat or action. There are several times throughout the play when jurors have to keep one man from physically attacking another. That energy, combined with the interactions that develop between the ensemble cast, keeps things humming along in the jury room.

Anything Goes
Through Aug. 30
The only thing better than a Cole Porter tune is hearing it sung by someone with the talent to belt it out while expertly phrasing Porter’s wonderful lyrics. Melinda Parrett does just that in the lead role of Reno Sweeney, and it’s a privilege to hear her sing classics such as “Anything Goes” and “I Get a Kick Out of You,” all while not missing a choreographed step.

This musical, which premiered in 1934, features Parrett as just one of the characters trying to help a stowaway win the heart of an heiress while on an ocean liner heading from New York to London. Along the way, we get to hear Parrett team up for duets with Max Robinson as Moonface Martin on “Friendship,” Aaron Galligan-Stierle as Lord Evelyn Oakleigh on “The Gypsy in Me,” and Robert Adelman Hancock as Billy Crocker on “You’re the Top.”

Love’s Labour’s Lost
Through Aug. 31
Love’s Labour’s Lost shows that Shakespeare was more than 400 years ahead of the reality-TV trend when he published this play in 1598. Start with four eligible bachelors who take a vow not to be involved with women for three years. And after everybody signs their oath, let the temptation of four beautiful women show up.

Of course, what Shakespeare does with this premise in the 16th century is far better than anything you’ll see on TV in the 21st. The beautiful language contained in the witty barbs and protestations of love is a pleasure to listen to. The Bard also throws in supporting characters and subplots that add comedy to the mix. Matt Zambrano is one of the highlights as Don Adriano de Armado, a Spaniard who, much like Karl Malone, is a delightful butcher of the English language. Other notable performances include Matt Mueller as Berowne, the most reluctant of the no-ladies oath-takers, and Melinda Pfundstein as the quick-witted Rosaline.

The Tempest
Through Aug. 31
Magic? Check. Fairies? Check. Shipwrecks? Check. Monsters? Check. The Tempest, Shakespeare’s final romance, takes audience members to the island ruled by Prospero, who is scheming to restore his family to its former glory by luring his brother to the island. The shipwreck brings his brother, but also Ferdinand, who has his eye on Prospero’s daughter, Miranda.

Despite all of the different subplots, the theme of the play—and what makes it so timeless—is Prospero struggling between his desire for revenge and his hopes for the future. No wonder Dr. Phil has been able to make a career out of asking, “Do you want to be right, or do you want to be happy?”

Melinda Parrett as the otherworldly Ariel, a spirit controlled by Prospero, transforms herself to such an extent that the viewer is willing to suspend the belief that there’s an actual human behind the extraordinary makeup and costume, in a performance as eerie as it is captivating. 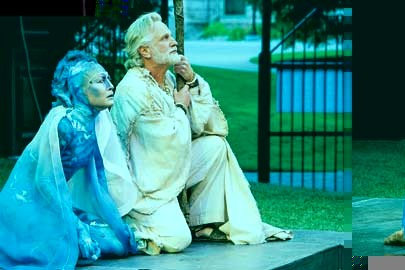 King John
Through Aug. 30
This seldom-performed play is presented as part of the Festival’s Complete the Canon project that will perform all 37 of Shakespeare’s plays. (See p. 18.) The rare chance to see the first play in the Bard’s history cycle is reason enough to go, but so is Corey Jones’ turn as the title character. As a complex swirl of schemers and warriors unfolds around him, we see Jones go from strong and proud to confused and confounded, and Jones lets us see the character gradually come undone strain by strain, piece by piece, scene by scene.

The experience is made all the better by having the best ensemble cast in the entire festival, with strong performances by Steve Wotjas as Philip the Bastard, Fredric Stone as Philip King of France, Melinda Pfundstein as Constance, Jeanne Paulsen as Queen Eleanor and the young Bailey W. Duncan as Arthur. 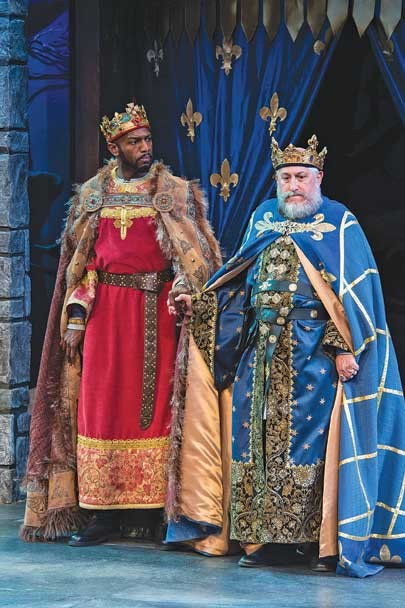