Could the national debt be paid off by converting oil-shale deposits in Utah into oil and selling it on the market? 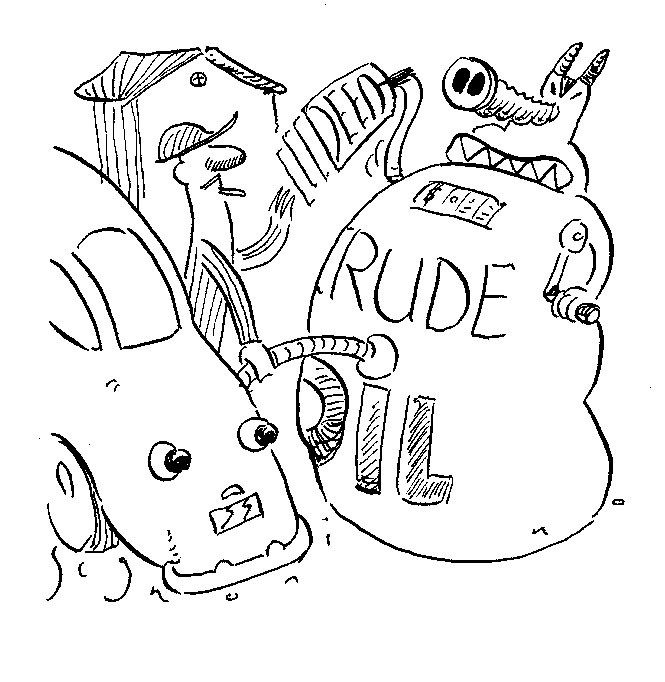 I've heard the current national debt could easily be paid off by converting oil-shale deposits in Utah and Colorado into oil and selling it on the market. Is there any truth to this? —Ken Vaughan, Oregon

It's not an entirely crazy thought, I guess. Estimates vary, but the United States Geological Survey believes there's about 3 trillion barrels of oil sitting in what's known as the greater Green River Basin, a sedimentary rock formation lying beneath parts of Wyoming, Colorado, and Utah, more than 70 percent of which is owned by the federal government. Even if only a trillion barrels of that is recoverable, that's still nearly four times the total oil reserves of Saudi Arabia.

So how much does a trillion barrels of oil get you these days? Depends on your timing. Over the last five years, the price of oil has varied nearly as much as your post-divorce weight—from less than $50 a barrel to nearly $130. Average that out to $90, and we get the whopping sum of $90 trillion in revenue. OK then, you say: time to make it rain.

Before you get too excited, consider the expenses. Production costs vary more than prices, so much so that recent estimates for the break-even price—the per-barrel price above which it's worth extracting oil from shale—range from $24 to $110. The crucial organic compounds in oil shale are in solid form, so the stuff has to be mined and retorted (heated to a high temperature), and then the resulting petroleum-like liquid gets separated out and collected. The development of other, possibly cheaper methods (like in-situ retorting—heating the shale underground and pumping the liquid out) has been limited thus far by the lack of investment in shale production generally. So, assuming that the break-even price for shale oil falls somewhere between $60 to $85 per barrel, the overall profit on a trillion barrels could be anywhere between $5 trillion and $30 trillion.

Given that the total national debt is now approaching $18.2 trillion, Green River shale oil money might or might not cover it. As I write this, oil is at about $52 a barrel, meaning you'd likely lose money on shale mining—one big reason the government couldn't just sell off the rights today. And then, as always, there's environmental impact: among other problems, extracting the Green River shale oil would require vast amounts of water in an area suffering from severe drought, and it would be competing for these resources with the country's most valuable agricultural land—say goodbye to almonds. But even if that shale oil had the potential for $30 trillion in profits, we'd still need to raise maybe $60 trillion in capital to pay for the investment. Even if Apple, the most valuable company in the world, were to liquidate itself, it wouldn't raise $1 trillion.

Valuewise, none of our other energy assets are in the same league. The U.S. Strategic Petroleum Reserve, currently the largest emergency supply in the world, now contains 691 million barrels. Even at $90 per barrel (which, again, is well above the current price), that's only $62.2 billion. The government also owns about 88 billion tons of coal reserves, and could possibly sell that off as well. But production costs are mighty here too—only a dollar or two per ton below the retail price—so those reserves probably aren't worth more than $176 billion.

But America is nothing if not enterprising, and if it came down to a national rummage sale there's lots of things we could slap a price tag on—the Smithsonian Institution, for instance. High-end museums don't tend to include the value of their collections on balance sheets, presumably because this would be both speculative and gauche, but I think we can assume the Hope Diamond has some significant street value. At $1,200 a troy ounce, the gold in Fort Knox would be nominally worth around $177 billion, if you could dump that much gold on the market without obliterating the price.

What else? One idea floated by a Washington Post financial writer a few years back: sell Alaska. Projected value: $2.5 trillion (minus reparations to the current residents). Then there's our nuclear arsenal, which we sunk at least $5.5 trillion into between 1940 and 1996. Deterrence is all well and good, but it may be time to get some more tangible benefit out of these things.

Of course, the actual answer to your question is: why pay off the national debt at all? We haven't since World War II, and as long as we make sure tax revenues keep up with the interest we don't really need to. Running a country's economy isn't very much like running a household, as many economists have pointed out, and anyway we actually earn more from our assets abroad than we pay to foreign investors. Look, at the moment there're clearly a couple things we could stand to spend a few extra trillion dollars on—infrastructure and energy development come to mind. Squaring the national debt may, under the circumstances, be an unaffordable priority.