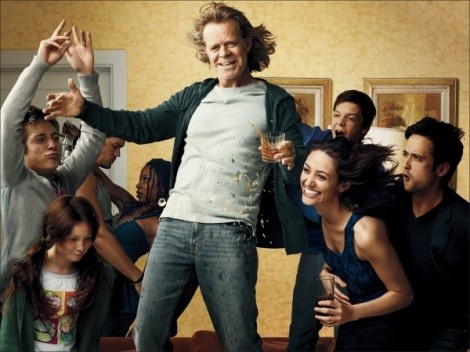 Season Finale: This sure as hell didn’t look like America’s best new family TV series when it debuted in January, but the U.S. adaptation of Britain’s Shameless puts Parenthood to, well, shame. The destitute Gallagher clan, led by deadbeat dad Frank (William H. Macy) and dead-tired daughter Fiona (Emmy Rossum), aren’t a postcard for Chicago, but their familial loyalty and creative (mostly felonious) survival skills are as inspirational and heartwarming as a shot of bottom-shelf whiskey with an Old Style chaser. In the first-season finale, Frank goes into hiding after being caught on webcam with his girlfriend’s underage daughter(!), Lip and Ian are facing jail time for auto theft, and Steve tries to persuade Fiona to split town with him—all of which will go horribly, hysterically wrong. Just like family.

Season Finale:
We all (well, most of us) know how Bill Henrickson sidestepped his statutory-rape charges on the Big Love grand finale, but how’s Hank Moody (David Duchovny) going to pull it off? The Californication Season 4 closer, “And Justice for All,” was obviously written as a series finale as well, but Hank’s 12-episode road to redemption after being busted for unwitting sex with a minor—now officially premium cable’s trending topic—ends less tragically. And, with loose ends tied up, Season 5 (Showtime has renewed Californication for 2012, possibly blindsiding the writers who wrapped this season in 2010) is wide open. You can’t cage Hank … not that that’s a hint.

Mildred Pierce
Sunday, March 27 (HBO)
Miniseries Debut: If you only know Mildred Pierce as a Sonic Youth filler track, you’d do well to avoid this five-part miniseries based on the classic novel: The story unfolds between 1931 and 1940, and damned if the pacing doesn’t make it feel like it’s happening in real time. Not that Kate Winslet’s titular performance as an abandoned Depression-era housewife isn’t stunning, heartbreaking, luminous and the rest of her usual adjectives—it is. Ditto Mildred Pierce’s exacting attention to period detail in every thread, appliance and musical note. But, it’s all so downbeat and humorless that you have to wonder if it’s a trick to make you … read the book.

United States of Tara
Monday, March 28 (Showtime)
Season Premiere: What’s Tara’s (Toni Collette) answer to taming her stress-triggered, multiplying multiple personalities, one of whom (redneck asshole “Buck”) is going on mysterious overnight motorcycle rides to another town to terrorize people at gunpoint? Going back to college to finish her degree, of course. Even better, her psychology professor (ultimate score guest star Eddie Izzard) doesn’t believe multiple personality disorder—dissociative identity disorder, as she corrects him—is even a real condition, even when he meets “Dr. Shoshana” on the first day of class. United States of Tara is still Showtime’s most underrated series; this risky, twisty third season should change that.

Body of Proof
Tuesday, March 29 (ABC)
Series Debut: Dana Delany is Dr. Megan Hunt, a genius neurosurgeon who, after a debilitating car accident, is forced to slum it as a police medical examiner—her hands are only good for working on dead bodies now, even though she still has the ego and social skills of Dr. House. Suddenly, it’s her new mission to become an “advocate for the dead” and tell the stories of the murdered. Delany is good, but she may not be good enough to save a faux-gritty mash-up of Medium and Crossing Jordan (or Quincy M.E., for you older viewers). Throw in Jeri Ryan as her boss, and you’ve even got a little Rizzoli & Isles (or Cagney & Lacey, geezers).