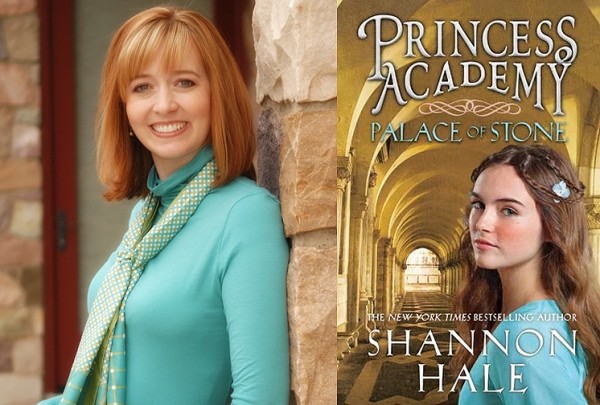 Shannon Hale always planned to write a sequel to her Newbery Honor-winning 2005 book Princess Academy. But the characters of another book were more insistent that their stories be told. That book was followed by another book, then more after that, and it wasn’t until one word gave Hale an irresistible idea for a way to complicate her heroine’s life that she decided to return to Miri’s world.

“Miri is a revolutionary at heart and deeply concerned with justice and equality. But her best friend is the princess,” Hale says. The idea “kept percolating … and I couldn’t wait to jump back in and write it.”

Princess Academy told the tale of mountain girl Miri as she and the other girls in her village leave home to attend school for the first time, after it is prophesied that the prince will marry someone from their remote Mount Eskel. It turned the conventional princess story on its head (spoiler alert: Miri does not end up with the prince), and readers responded by making it a best-seller.

In Palace of Stone, Miri and a handful of her fellow students from Mount Eskel’s princess academy travel to the kingdom’s capital to help their former schoolmate prepare for her royal wedding. But when they arrive in Asland, Miri is shocked to see the huge disparities between those in the palace and their subjects. She’s soon swept up in a movement to change the kingdom, testing her loyalty to her best friend and forcing her to question what she really wants from life.

There’s not a cackling villain to be found in Palace of Stone, neither in the increasingly violent revolutionary agitators nor in the oblivious, responsibility-shirking royal family, making it that much harder for Miri to know which is the right path to follow—or if there even is a right path. It’s these questions, and Miri’s stumbles as she attempts to find her way, that give the story a deep authenticity despite its fantastic setting. How much easier would life be if all choices came down to good vs. evil, hero vs. evil sorcerer?

“I believe there is very little pure evil in the world,” Hale says. “People with good intentions make terrible mistakes.”

The lack of a traditional villain also means that Miri has to rely upon her own wits and inner strength—rather than a sword—to fix the seemingly unfixable political situation in which she and the kingdom have become embroiled. “I love a great kick-butt action sword-fighting story, but I’ve always been hesitant to write that,” Hale says. “I feel like often we equate power with traditional masculine traits, i.e., swords/guns/big muscles. … I want to see my heroine succeed without a phallic weapon in her hand.”

Despite this absence of phallic weapons, Hale’s fantasy books have found their way into the hands of a few appreciative boys—but usually in secret. It’s something she attributes to the stigma that society—and schools—have placed on boys reading what have been deemed “girl books” due to the gender of the author or girls’ faces on the covers.

“I think it’s a real disadvantage for boys and men. Girls are so much more flexible, and they’ll read so many more styles of books,” she says. “And I think that gives them an understanding and insight into people that boys aren’t allowing themselves to get.”

Hale recently wrote a blog on the subject that has been shared more than 12,000 times. “I wasn’t expecting that kind of reaction,” she says. “Clearly, this is something many of us think and worry about. I think the most important thing is just talking about it and acknowledging that boys are shamed away from reading books about girls or liking anything that some deem ‘girly.’ Once we can see the problem, we’re better able to address it.”

Addressing problems is something Hale can’t resist. Even when being pregnant with twins led her to take two years off from being “Shannon Hale, Author,” she wrote a steady stream of insightful posts on her website in which she tackled topics such as sexism, education funding and required reading—inciting discussions and poking the occasional hornets’ nest along the way. “I tend to blog about things that I’m really passionate about,” she says. “I read an article that someone on Twitter recommends, and then I get outraged and talk about it with my husband, and then think, ‘OK, I’ve got to let this out.’ And when I’m passionate about something, the words just flow faster.”