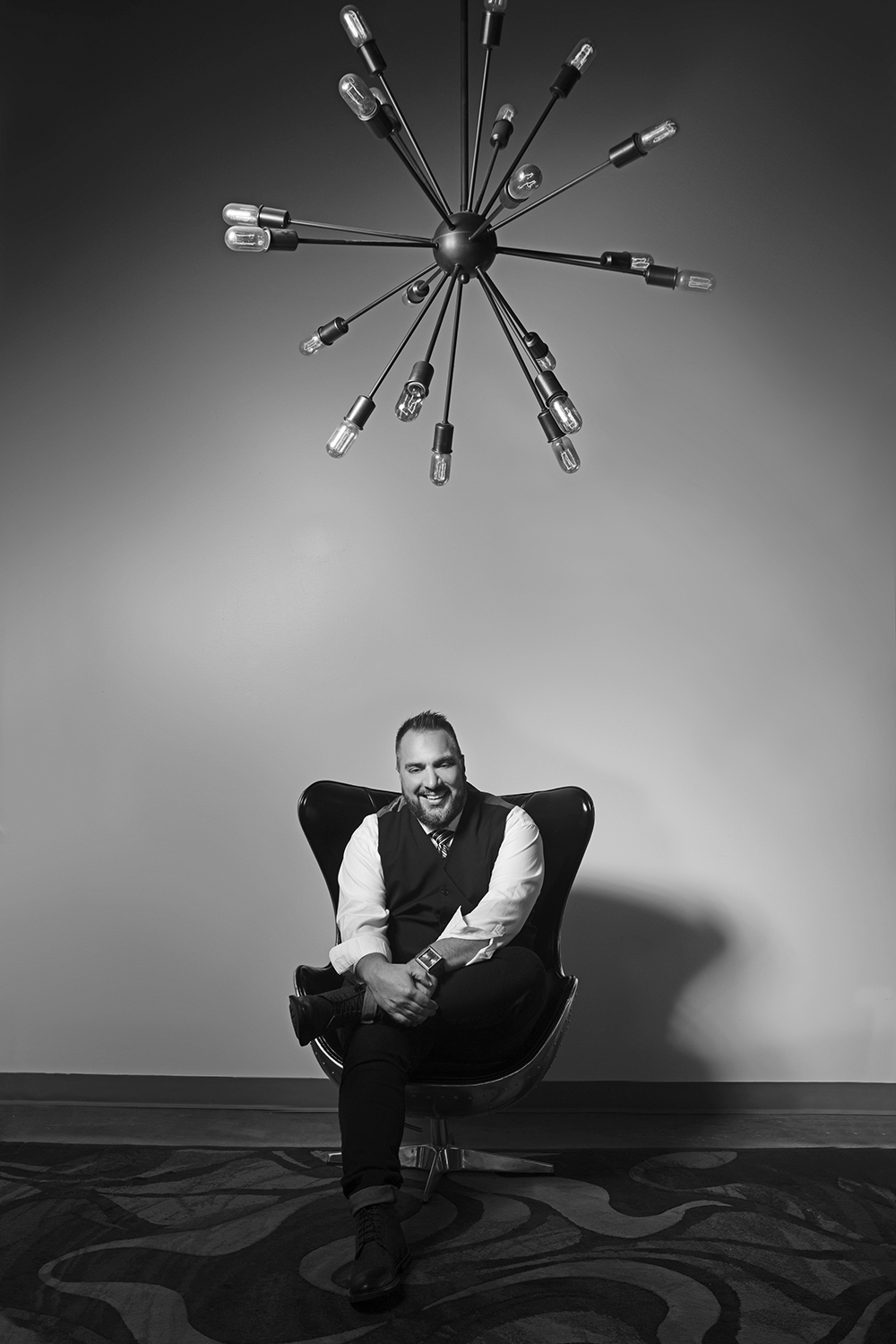 To attend a Soundhouse performance is, for the uninitiated, to be astonished. Guests "imagine what the best high school band would sound like," Soundhouse founder Caleb Chapman says, "and they're never even close to what the musicians pull off." At a December performance, I was bowled over by the young musicians, ages 8 to 18, who were undeniably talented but also brimming with confidence. Had anyone ever had more fun than these kids? Their joy was infectious. The audience was laughing, crying, clapping and standing up to sing along. And Chapman was right there with the kids—jumping up and down as he conducted, leaping across the stage, egging them on, sweat dripping down his face, a synergy of conductor and performers, sound and motion.

Chapman says the whole music thing has been, in large part, an accident. As a child, he was sent to music camp instead of soccer camp; after being put into jazz and rock bands, "I caught the bug," he says. A Boston native, he started what would later become the Soundhouse in 1998 while attending BYU for saxophone performance. A small group of junior-high musicians needed help with an after-school band; they came to Chapman, who recognized their enthusiasm and helped lead the group. The Soundhouse grew from there.

But the evolution of the Soundhouse has been far from accidental. Led by Chapman, the music school has carefully honed its model, resulting in numerous awards, including 65 DownBeat Student Music Awards, which recognize the most talented young performers in the U.S., and 25 Best of State medals. Chapman himself has been nominated for the Grammy Music Educator Award and recognized in Utah with the John LaPorta Jazz Educator of the Year Award and the Utah Performing Artist Award. Soundhouse students have gone on to be successful musicians and professionals—a drummer for one of the first iterations of the Soundhouse's Crescent Super Band, Andrew Tolman, went on to be a founding member of Imagine Dragons and current member of The Moth & The Flame, another indie rock favorite with local roots.

The school's success is a result of its innovative instruction model. "For centuries, it's been believed that you can't teach music through popular or contemporary styles, and we are positive that's not the case," Chapman says. "When we use contemporary music that's relevant culturally to young musicians, they're more motivated and more committed, their process is faster, and they actually do become the best classical and jazz musicians." The Soundhouse currently runs 21 ensemble groups ranging from jazz and big band to contemporary pop and rock; nine of these ensembles perform in this weekend's jazz showcase, which features legendary guests like Will Calhoun of Living Colour.

Groups rehearse once a week for two hours, which seems like an impossibly short amount of time, given the professional-level quality of the music. But most of the learning happens outside of the Soundhouse classroom—all musicians are required to work one-on-one with private instructors and participate in their public-school music programs.

Chapman toured with the Neon Trees in 2018 and founded the Osmond Chapman Orchestra with David Osmond. All the producers are active musicians; even those on the business side—the CEO, COO and marketing director—are involved in personal music projects. "But for these kids, if they want to have success with their bands, they need to take ownership," Chapman says.

That empowerment enables the kids to perform confidently, even when they're working with world-renowned celebrities. The Soundhouse musicians have collaborated with Grammy-winning jazz musicians and contemporary pop and rock stars like Dave Matthews, The Rolling Stones, Journey and Maroon 5. Individual ensembles have also toured the world, from China to New York to Las Vegas. "These experiences force the kids to raise their game to a fully professional level," Chapman says.

Confidence is Soundhouse's intended end result. "To me, music is not the most important thing we're teaching," Chapman says. "The most important thing we're doing is instilling these critical life skills in these musicians, so that whether they decide to pursue music or business or law, they're going to have success. That confidence—that's what you want to feel when you walk into the doctor's office." A mom I spoke to at the concert I attended said that, for her eighth-grade daughter, the program forces her to work hard so she can earn the respect of her peers and producers. "The world doesn't need thousands and thousands more professional musicians," Chapman acknowledges. "But the world does need as many more successful individuals as we can create."

The Soundhouse has been a Utah institution from its start. Being located in an out-of-the-mainstream corner of the U.S. has opened up more performing opportunities and celebrity relationships than Chapman believes would otherwise have been possible. But after 21 years, the Soundhouse is expanding in two big ways: first, with a new program for adults, and second, with new locations in New York City, Nashville and Los Angeles, set to open this year. Chapman says the plan is for 140 additional locations in the next 10 years, with 40 outside of the U.S. "For a long time, we were really limited in how much impact we could have," he says. Now he's looking forward to expanding his reach. "I feel like we've cracked the code, and I am confident we can really teach the Soundhouse method and make it work other places."

As for the adult program, Chapman says he's finally relenting. "I've been in bands with adults, and working with young musicians is way more fun. They are hard workers, and they're fun to be around," he says. "I'm 45 now, and it keeps me young, being around all these kids. I love their energy, I love their enthusiasm, I love their hunger for learning, I love being connected to what's current ... it just keeps you alive."