Sharknado 2: The Second One

Chum of All Fears: Take the Sharknado 2: The Second One quiz! 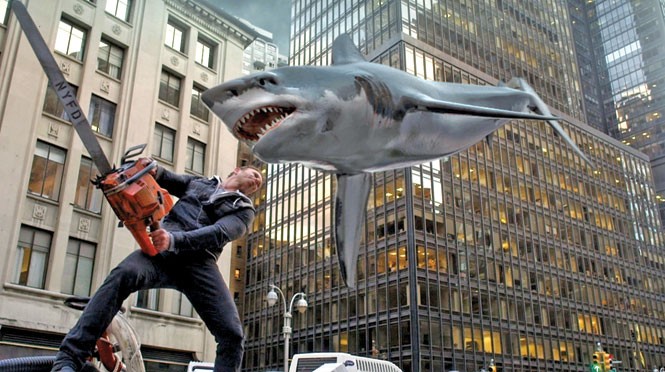 The Only TV Column That Matters™ has seen the glory of Syfy's Sharknado 2: The Second One (premiering Wednesday, July 30—come see it at Brewvies Cinema Pub, 677 S. 200 West, Brewvies.com, 21+, for free at 7 p.m.) in advance and can definitively report that it's even more ridiculous than 2013's surprise ... hit? ... Sharknado. This time around, the chompy tsunami hits New York City, and it's up to Ian Ziering and Tara Reid, as well as Kari Wuhrer, Mark McGrath, Vivica A. Fox and a seemingly endless parade of other guest stars—who've probably since fired their agents—to shut down the SharkDown. It may be cheesier than an overturned truck of Doritos Loaded in a 7-Eleven parking lot, but Sharknado 2 isn't entirely predictable—let's pre-test your pre-knowledge of The Second One:

1. Even though he's famously battled one before, nobody believes Fin Shepard (Ziering) when he initially warns of a Sharknado hitting NYC because:

B. He thinks the best pizza in Noo Yawk is made by Biz Markie.

C. How can you trust the judgment of someone who'd re-marry Tara Reid?

2. The movie's catchy, Ramones-y theme song (yes, it has a theme song) features the lyrics:

A. "Stay away from Central Park/ You'll get your ass bit by a freakin' shark."

B. "So damn much trouble we're in/ So ironic our hero's name is Fin."

C. "Teeth are raining from the sky/ 'Scuse me while I kiss this guy."

3. At the beginning of Sharknado 2, Tara Reid loses:

A. Her ability to create even the most basic facial expressions.

B. Any trace of acting talent she may have, arguably, once possessed.

C. Half of her screen time (and probably salary) to Kari Wuhrer.

4. Of the movie's many B-celeb cameos, the least convincing are:

A. Robert Hays (Airplane!) as an airline pilot and Judd Hirsch (Taxi) as a cab driver.

B. Billy Ray Cyrus and "Downtown" Julie Brown as a doctor and nurse.

5. Co-star Mark McGrath, who gets an inexplicable amount of screen time, used to sing in the band and host the TV show:

A. Smash Mouth and Entertainment Tonight.

C. 98 Degrees and To Catch a Predator.

6. The guy who wrote Sharkado and Sharknado 2 is actually named:

7. In addition to Sharknado 2, Syfy will also soon roll out the new monster flick:

8. Beside the whole sharks-sucked-up-into-a tornado thing, the most unbelievable part of The Second One is:

A. Ian Ziering flying through the sky with a chainsaw hacking up sharks.

B. Tara Reid's character was scheduled to appear on Live! With Kelly & Michael (who also appear) to promote a book she wrote.

C. Said "book," titled How to Survive a Sharknado, looks all of 50 pages long.

D. A packed stadium for a Mets game.