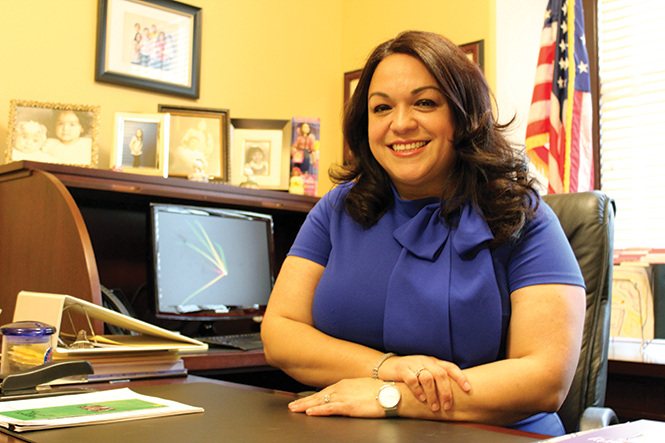 Luz Escamilla's schedule is full. Hot off a campaign for Salt Lake City mayor, and making time for City Weekly during the hustle and bustle of Day 1 of the General Session of the 63rd Legislature, the District 1 senator takes a minute to catch her breath inside her fourth floor office. "Just trying to get in and out of the Capitol, even when you think it's going to be a quick trip, it never is," she says through the faint noise of 500 children, there for Charter Day on the Hill, exiting the building. "Opening days are always different."

Hello Kitty figurines—a gift from her "quinceañera" daughter, Aileen—adorn her computer space, which includes a business suit-clad political candidate Barbie doll perched atop a shelf—a Christmas gift from her mom.

Asked for a Schoolhouse Rock!-style breakdown of her role, the self-professed "policy geek" is quick to dive in.

"Basically, what you do as a minority whip or being the whip, is you're supposed to whip the votes," she explains. "So, my job is to make sure my caucus knows what's happening. I keep an eye on them on the floor ... I need to know where they are when we're taking votes. At the end of the session, we're [taking] votes on hundreds of bills within hours. It can go really fast, so we really depend on all of our members being as accessible as possible, because we could be presenting a bill somewhere else and be voting at the same time."

The frantic nature of the role is expected during the 45-day session.

"Because our legislative session is so short, that means everything happens," she says. "We balance a budget of $18.7 billion every session, which is the No. 1 responsibility for the state Legislature—how we spend the taxpayer's money, so fees and so forth. But we also review about 1,100 bills on average and 500 pass, give or take. So, it's a very fast-paced thing."

That behemoth budget, Escamilla, a 12-year veteran at Zions Bancorporation says, is her top priority. "Because in my caucus, I'm the person that's the lead person on [it], so for years I've been leading in that role, and it's been really very rewarding. It's the toughest thing we do here, and I think people sometimes disregard that budget process, because it's easier to follow a bill that is controversial. We do a lot of bills—but the budget is the most important thing."

This year, one of those buzzy bills was SB2001, the proposed tax reform bill. Following community uproar in the shape of protests and 152,000 voter signatures, Gov. Gary Herbert repealed it during the session's second day.

"I was never supportive of the idea of ever looking to taxing food. I think that's a regressive way of policy when it comes to taxation, and one that I completely disagree with, so it was a nonstarter for us," Escamilla, a member of the Senate Revenue and Taxation Committee, says. She adds that all her Democratic counterparts were also against the bill which, among other things, would have raised the sales tax on groceries from 1.75% to 4.85%.

Still, she recognizes some of the bill's positive elements, namely, Earned Income Tax Credits (EITC) for workers with low and moderate incomes and a Social Security Income tax credit, or as she puts it, "two good things out of really bad policy on the other side."

Simultaneously authoritative and approachable, it's hard to imagine Escamilla's 2019 session, her 11th, could have been her last. In March of last year, the mother of three announced her candidacy for Salt Lake City mayor. She managed to stand out from the overcrowded herd, got her name on the ballot and secured the endorsement of outgoing Mayor Jackie Biskupski. "We really have the opportunity here to elect another trailblazer," Biskupski said at the time. "Somebody who will bring to city hall the change that our community needs."

"It sucks to lose, right? No one wants to be the loser, but it was a great, humbling, growing up experience for me and for my family." tweet this

Looking back, the Rose Park resident by way of Tijuana, Mexico, calls the experience a "roller coaster. I mean, ups and downs—there's a lot of adrenaline involved in campaigning."

"It's been difficult. It sucks to lose, right? No one wants to be the loser, but it was a great, humbling, growing up experience for me and for my family," she says. "We received so much love and support from everyone. It's still very humbling."

Ups and downs aside, she's not entirely closed off to a second run. "At this point, I probably wouldn't think about that, but never say never, right?" she says.

In the meantime, she's happy the outcome placed her back on the Hill. "I love the Capitol," she says. "I love the people I work with and the legislative process: seeing something begin with an idea and take it through a whole process, and be able to pass something in a year, and start seeing the results of your work."

One of those pieces of legislation Escamilla hopes to pass, is a not-yet-numbered bill she's sponsoring. It's designed to tackle the environmental impact of the proposed 16,000-acre inland port in Salt Lake City's Northwest Quadrant, which sits in close proximity to her district.

The bill is composed of three parts.

"One is membership," she says. "From the beginning of the inland port, I think it's critical to have the Salt Lake mayor have a seat, so my bill will bring the Salt Lake mayor or a designee to be on the Utah Inland Port Authority Board." An invitation would also be extended to a member of the Salt Lake City School District.

The second prong addresses the creation of a tailored mitigation fund to address the impact the project could have on neighboring communities.

"The tricky part here, is that we're not only talking about Salt Lake City. The hub is Salt Lake City, but spokes could be in other parts of the state," Escamilla says, delineating how the needs of Westpointe will be different to those from San Juan County.

She says she's open to hearing ideas from the Inland Port Authority as to how to establish the fund, "whether it's a charge or potentially taxing authority," she says. "Some places, they've done 25 cents for every semi-trailer that passes through—and that's how you create a fund."

Lastly, the bill would delineate how construction waste should be disposed. "I'm trying to keep as much waste from landfills as possible by recycling construction/demolition [materials]," she says, adding that another simultaneous bill she's introducing lays down a waste-disposal plan for cities and municipalities.

In the midst of the legislative frenzy, and with the clock ticking on her own marquee bill, Escamilla still takes time to appreciate her surroundings, including a collection of portraits that lines the walls leading up to her office. Consisting of 50 illustrations of notable Utah women—from racial equality champion Alberta Henry to Native people's civil rights advocate Zitkála-Šá—artist Brooke Smith's Utah Women Making History, Escamilla says, "showcases just how many amazing women we've had paving the way for many of us to be sitting here now, and being able to be a small part of the decision-making process."

The exhibit, she continues, is a silent reminder to keep pushing forward.

"I do try to at least pause when walking in or leaving this building to just realize how blessed we are to live in this great country that allows us to have a Mexican immigrant elected in a state like Utah—I think that speaks volumes of our state as well," she says. "And the opportunities; that the American Dream is the same for people who've been here forever or people who are just coming here for the first time."