A full look at the Oscar-nominated short films.

Every year, the Salt Lake Film Society showcases Oscar nominees in three short-film categories. For most film buffs, these are the obscurities nobody can predict correctly for their Oscar pool winners—but they're also showcases for talented filmmakers working in a too-rarely-seen form. Here's a look at all three programs, with predictions on who will be holding statuettes come Feb. 24.

Animated Shorts: The animated short of the year surely must be Domee Shi's Bao, a bittersweet and startling reverie on motherhood from Pixar that features one of the mosthilariously shocking moments onscreen this year. When a Chinese woman's handmade dumpling sprouts a face and a little body, she raises it as her own child,only to face the usual chagrin when her little friend begins to assert his independence and individuality. I'd be delighted if it won the Oscar, and I suspect it will. The other nominees: Weekends, by Trevor Jimenez, presents an occasionally nightmarish look at the life of a child of divorce bouncing between two homes. Louise Bagnall's impressionistic Late Afternoon depicts an elderly woman with Alzheimer's, whose lost memories help her find her way back to the present. One SmallStep, by Andrew Chesworth and Bobby Pontillas, offers a lovely ode to a young woman's lost, and then rediscovered, dream of becoming an astronaut.And Animal Behaviour, by Alison Snowden and David Fine, is the weakest of the nominees, and a rather on-the-nose peek in on a group therapy session in whichvarious mammals and insects discuss their personal problems—also their defining characteristics as animals. (A praying mantis can't get a date becauseshe eats her partners after sex; a cat is obsessed with self-grooming, etc.) I kept expecting a punchline or a twist that never came. 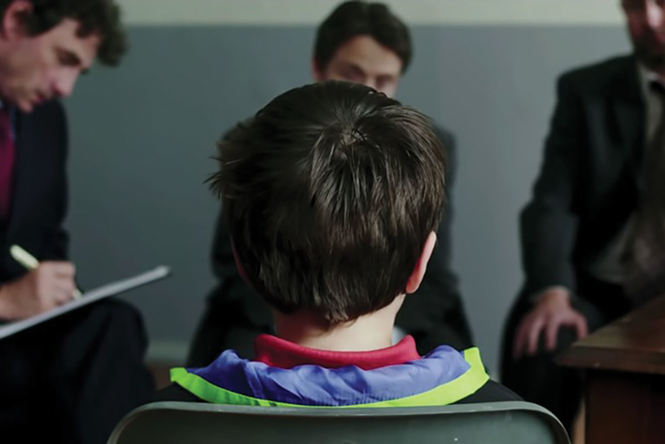 Live Action Shorts: I suspect Vincent Lambe's controversial Detainment will win the Oscar for best live-action short this year. His dramatization of the real-life policeinterrogations of two 10-year-old boys who killed a toddler in England in 1993 is profoundly harrowing and features deeply upsetting performances fromits young stars. The mother of the murdered child has called for its nomination to be rescinded—and her pain is understandable—but this is an importantexamination of an inexplicable horror. Other nominees: Jeremy Comte's Fauve, also about two young boys behaving recklessly with little awareness ofthe dangers of their game of childish one-upmanship; Mother, by Rodrigo Sorogoyen, a grim, bleak slice of terror in which a woman is tethered to her lostlittle boy by only a dying cellphone connection; and Guy Nattiv's Skin, which takes the perspective—again—of young boys, one white and one black, whowitness a racism-fueled clash between their fathers. The latter is a bit strained in getting to its explosive ending, but its message of children learning what theyare taught is well taken. The only film not about little boys, Marianne Farley's Marguerite, is a tender portrait of the relationship between an aging, ill womanand her visiting nurse, and the regret it fosters in the elderly patient.

Documentary Shorts: This year's Oscar-nominated documentary shorts span an array of social-justice matters, sometimes finding unexpected good vibes in difficult subjects.Netflix's End Game, by Rob Epstein and Jeffrey Friedman, introduces us to several terminally ill patients trying to chart a course through their final days; it'ssurprisingly optimistic and positive about death and dying. Period. End of Sentence., by Rayka Zehtabchi, is an upbeat portrait of women tackling taboosabout menstruation in India with their own community-based businesses making and selling sanitary pads. Much grimmer is Ed Perkins' Black Sheep, asimple, startling story told straight to the camera about a young black man coming to terms with how he befriended racists in order to survive a toughadolescence in a white town. Skye Fitzgerald's Lifeboat is similarly difficult to watch; it follows an organization that patrols the Mediterranean to rescuemigrants braving the crossing to Europe. This year's likely winner, however, is the briefest of the bunch by far—at only seven minutes—and perhaps the mostimportant: Marshall Curry's A Night at the Garden presents footage from a 1939 "pro-American" rally in New York City, complete with thousands ofsupposedly patriotic Americans performing Nazi salutes. It's a chilling reminder of the unpleasant cycles of American history.