Show Me the Wey

The story of one güey and his punk-rock boogie band. 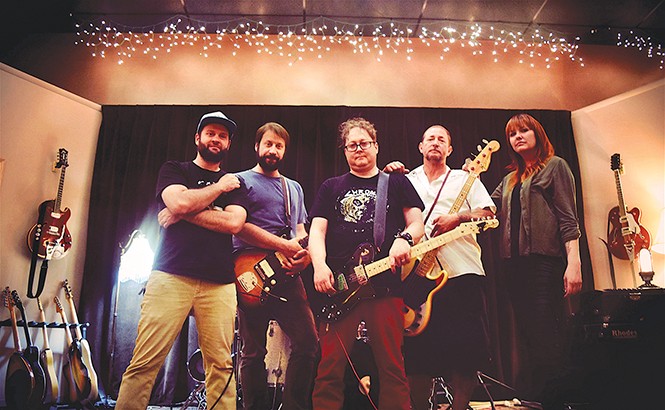 Here's your Español lesson for the week: The band Wey gets their name from the Spanish word güey, which they spell in a colloquial way. It's kinda like how some people think "ya" spells "yeah." But Wey's reason for not using the formal spelling is acceptable. "You don't want people to think it says 'gooey,'" vocalist Spock and I say, almost simultaneously.

As guitarist Eli Morrison finishes some things in the kitchen, listening to Debussy piano instrumentals on his zillion-watt stereo, Spock (real name Eric Uquillas) elucidates upon his choice of band name. He first heard the word in a scene from the Robert Rodriguez film El Mariachi. The title character orders a beer and, as the bartender begins to pour, he indicates—with contempt in his voice—that he'd prefer it in a bottle: "En botella, güey." Needing to know the meaning of the word, Spock looked it up. "The first thing that it said in the Mexican slang, Google fuckin' thing, was 'punk, bro, asshole, friend.'"

The precise meaning of güey/wey depends on the user's tone. A tone of derision gives it a negative connotation. One might say to an annoying person, "Ay, güey!" (Aw, dude!), "Ya, güey!" (Enough already, dude!) or even call someone "pinche güey" (fucking loser). Friendlier tones, obviously, make it an informal term of endearment. One of the most common uses of the word is equal to saying "dude."

Spock, 52, was born in Vallejo, Calif. By 13, he was living in nearby Fairfield. It was there that he started playing in punk bands. As a high school freshman, his band Karnage landed a song ("The Few, The Proud, The Dead") on Maximum Rocknroll magazine's compilation, Not So Quiet on the Western Front (Alternative Tentacles, 1982). By 17, Spock was in San Francisco, where he played in the band House of Wheels.

"That was our shot at the big leagues," Spock says. "We got a music lawyer, a manager, a development deal with [A&M] Records. But we only put out one song, on a Thrasher cassette. None of the other songs ever got out, but it was a good life experience: how to be young, dumb and fuck things up but have the time of your life for the whole ride."

By 1991, Spock was in Los Angeles working as an assistant editor on television series like Walker, Texas Ranger. Eventually, he decided that world wasn't for him and he relocated to Bend, Ore., to teach snowboarding. In 1996, he moved to Utah, teaching at local ski resorts and performing at Spanky's with the likes of Mountain Meadows Massacre, Junta Deville and The Jingoes.

Wey started after the latter band had run its course; "I broke up the fuckin' band," Spock says. He spent the ensuing summer days remodeling his basement into a practice space. At night, he'd jam on acoustic guitar, coming up with songs like "Scream About You," which merges The Stooges and Rolling Stones. "The songs were just coming to me—almost a whole album's worth," he says.

He called Jingoes drummer Trevor Goss and the pair refined the arrangements, then sent cassettes to potential bandmates. That's how Morrison (Ether, Red Bennies, The Wolfs, The Moths, Purr-Bats) became involved. Local über-producer Mike Sasich (Sarah Anne DeGraw and the Odd Jobs, Thunderfist, The Moths) enlisted as well. While recording, Spock's wife, Raemie, suggested that the song "Bark" sounded like it should be a duet; enter Thunderfist associate Anna Kennedy.

That was 2016, and Wey's eponymous debut album came out last Valentine's Day. Spock attributes the delay to busy schedules, not that anyone really cares, especially after hearing it, because—órale, güey—the album is pinche awesome. Imagine Jello Biafra stepping into John Doe's shoes, to caterwaul alongside Exene Cervenka (only it's Kennedy and her phenomenal voice). Now imagine X's cool intensity and the Stones' swagger with the trebly guitar fuzz of The Stooges. Wey calls it, fittingly, "punk rock boogie."

Spock estimates the band has played a dozen shows in its existence, and they have three shows planned to support Wey. Once they're done, Morrison intends to retire from performing live. Given how much music he's given Salt Lake City over the past 25 years, that's a bummer, güey. Spock says that, while he respects Morrison doing what's best for himself, he didn't form this band just to break up.

Stopping when Morrison leaves, he says, would be "putting a period at the end of something that's still gonna keep going. Do I wish Eli would stay with us? Of course. Do we respect his decision? Of course we do. And I think he respects our decision that we wanna share this music with as many people as possible. And the music yet to come."