by Colette A. Finney 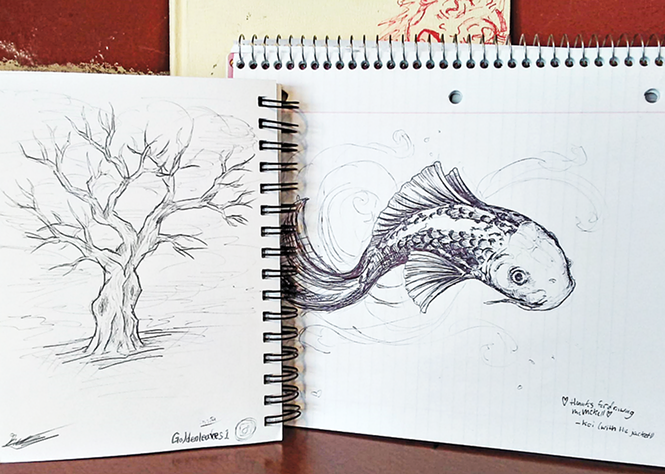 Spread across buildings and around obscure corners of Salt Lake City, Banksy-style street art has slowly been making an appearance over the past 15 years. Today, local coffee shops across the valley have discovered a similar artistic evolution in overflowing journals.

Cultivating a new generation of anonymous artists, the cafés offer spaces comfortable enough to serve as a public studio of sorts for those desperate for a creative outlet. Armed with basic art supplies and coin for coffee, these mystery creators etch designs on paper, keeping their identity largely unknown, absent a signature or decipherable initials.

Paging through the stacks of assorted notebooks, you can find a variety of work, from children's doodles to skilled illustrations, where true magic exists. Scribbles in Sharpie, penciled portraits and political satire cartoons are occasionally interrupted by relationship rants and poetic laments, while others prefer to make collaborative creations. Even those at a loss for a proper writing implement have scratched their itch to create with black eyeliner pencil.

At The Coffee Shop in Riverton, creativity abounds. The shop goes through about five sizable journals a year, according to general manager Christian Coleman. Impressed with the talent of the unknown artists, employees even borrow the art on occasion to hang on their refrigerator, in addition to displaying the best drawings on the back wall. "It was kind of wild how it started years ago when customers just started bringing in empty journals and leaving them for people to fill up," Coleman says. "A lot of the art is really cool. It is insane how talented these kids are. ... Some even come in and draw all day."

While The Coffee Shop's clientele ranges from toddlers to seniors, the staff believes most of the artwork is done by teens or college students, and they are happy to be a sanctuary for those who need a creative outlet. Eventually, they plan to have a wall dedicated to these local artists as, according to Coleman, "it brings a cool atmosphere to the overall environment of the coffee shop."

Utah resident "GoldenLeaves1," just shy of 20, is one of the artists captivating visitors at The Coffee Shop with his sketches. Speaking via email, he said he rarely shares his work in public or on Instagram. "The thing about the coffee shop is that it encourages creativity with its welcoming atmosphere," GoldenLeaves1 said. "The people there are great and always positive."

While he has witnessed others sketching away at their tables, he prefers to keep himself—along with his artwork—anonymous, even though he dreams that art will be understood by more people. "Drawing has no rules and I like to keep my identity somewhat a secret, mainly because I draw just because I like to," he said. "All you need is some motivation, and with just a pen and paper, beauty can be created. It's freedom and imagination."

Across town just more than four years ago, staff at High Point Coffee in West Jordan took it upon themselves to put out empty notebooks for their artistic customers. Art covers the walls, and even the counter, with attention-grabbing drawings aplenty. "We are happy to offer a good culture for people to feel comfortable enough to express themselves," says Lindsay, a High Point barista.

However, there can be one downside to leaving the books unattended, as occasionally obscene remarks or pictures will find a place within the pages. "We have to go through them once in a while and pull out offensive work," Lindsay says. "There's always got to be that one person who ruins it for everyone."

Shielded by a cloak of invisibility, artists around town are finding these alternate spaces freeing enough to foster their burgeoning creativity, and they could be initiating a trend. As the up-and-coming artists of the new millennium, they are following Banksy's footsteps and allowing the art to speak for them while adding an air of intrigue.

Also, in an era of the everyday critic on social media, perhaps adding a face and "résumé" to the equation would change people's perception of their work. Much like the old adage of "judging a book by its cover," the artwork could face prejudices related to image, race, orientation or beliefs.

Regardless of the reasoning behind Utah's anonymous artistry, based on the compliments left in the margins of the notebooks—such as "gorgeous, amazingly creative, love this artwork!"—this form of guerilla art-fare is gaining a following by encouraging creativity, connections and community involvement, and serving as a brief escape for both artist and viewer. One commenter said it best: "Art is medicine for the soul." With the increased prevalence of mysterious art, we could all be soothed.