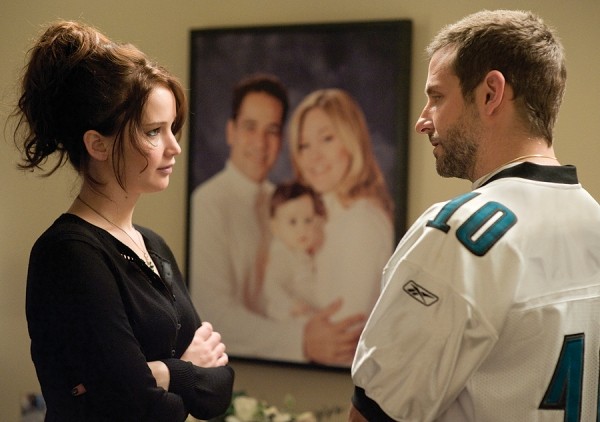 Matthew Quick’s terrific 2008 novel The Silver Linings Playbook was a jaggedly funny, often unsettling first-person story of a man trying to return to normalcy after a traumatic event leads to a psychological breakdown and violence. So trust me when I say that the approach taken by writer/director David O. Russell (The Fighter) is one I absolutely did not see coming: He turned it into one of the best romantic comedies in years.


It’s not as though Russell tore up the source material and started over from scratch. His protagonist, Pat (Bradley Cooper), is still an emotionally damaged guy recovering with his parents (Robert DeNiro and Jacki Weaver) in their working-class Philadelphia neighborhood after a court-mandated stint in a mental hospital. He’s still clinging to an optimistic belief that if he continues his disciplined path of self-improvement—exercising regularly, reading great works of literature—he could get back together with his estranged wife. And Pat still forms an odd friendship with Tiffany (Jennifer Lawrence), the widowed sister-in-law of his best friend, whose own recovery from tragedy has involved a prickly attitude and sleeping with everyone in sight.


But Russell does make some fairly significant departures that steer Silver Linings Playbook in a considerably more crowd-pleasing direction. The “big reveal” of the event that landed Pat in the hospital—held by Quick until the end of his book—is dispensed with early on here, along with a key point about the seriousness of Pat’s psychological problems. Yet, Cooper still plays Pat’s bipolar disorder as unpredictable in his attempts to manage it on his own, as though sheer will power and positive thinking might be enough to overcome his traitorous brain chemistry.


Cooper gives what’s likely the best performance of his career thus far, but he had to step up his game to match what Jennifer Lawrence brings to her role. The ridiculously talented Lawrence—no stranger to nailing roles with a survival-instinct ferocity after The Hunger Games and her Oscar-nominated work in Winter’s Bone—is a knockout as Tiffany, wrapping the character’s guilt and self-loathing in a blanket of defensiveness and brutal honesty. The key scenes building the tentative relationship between Pat and Tiffany—including the acidic variation on rom-com “meet-cute” at a dinner party, and an awkward first not-a-date at a diner—are terrific showcases for these performances, while also making it clear what a nightmare Russell had written himself into: trying to explore a connection between psychologically broken people that could work as upbeat romance without being insulting to the complexity of such disorders.


Yet somehow, Silver Linings Playbook pulls its pieces together so that the stakes feel legitimate even as we see the potential pitfalls in this pairing. There’s an unsettling sequence in which an agitated Pat becomes a physical threat to his parents. And even when the dialogue turns to the kind of dueling recriminations that can be a slow painful death for any film, Russell gives it an unconventional energy that makes even moments of highly scripted banter—like Tiffany’s insistence to Pat’s father that she hasn’t somehow become a “jinx” to the success of the Philadelphia Eagles—effective as purely satisfying filmmaking.


The real danger zone for the film comes as it builds toward a big dance competition for which Tiffany has enlisted Pat to be her partner, in exchange for serving as the go-between for Pat to get a letter past the restraining order to his wife. Russell bumps up the stakes unnecessarily by having Pat’s father risk a huge bet on the outcome of the performance, and makes it clear exactly what kind of score we need to be looking for in order for their unconventional routine to culminate in a happy ending. The crowd-pleasing arc of a romantic comedy would seem to be enough, without also requiring a side trip that turns the finale into The Karate Kid.


But, as is true for most film romances, the bottom line is simple: Has the story established characters whose happiness we can root for, and whose happiness seems tied to one another? Silver Linings Playbook offers up two wonderfully crafted characters, and makes their journey largely delightful—even though we always know that there’s a lot more under the surface than a meet-cute.