The monster movie Sputnik can't deliver the subtext it promises 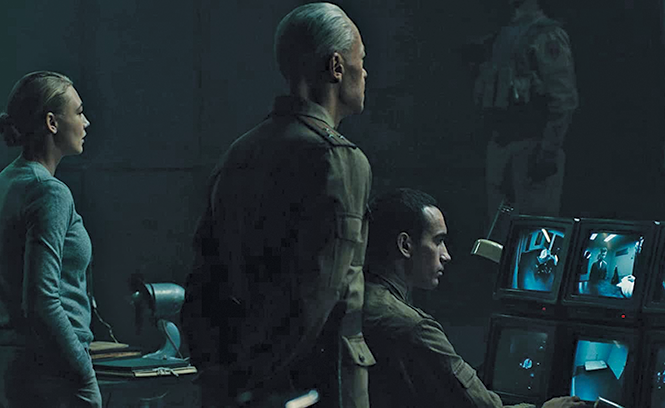 Genre filmmaking has long been a way to think metaphorically about the real-world things that scare us—but that doesn't mean they have to work that way. Sure, you don't need to look far to find classics of horror and science-fiction that are bubbling with social commentary beneath their surface scares, from the Atomic Age anxieties of Japan in the Toho kaiju monster movies of the 1950s, to critiques of mindless 1980s consumerism in George A. Romero's Dawn of the Dead, to Steve Spielberg's post-9/11 War of the Worlds remake. Yet there are also plenty of great stories that are just about primal terror, without ever attempting to send a message—because if you're going to send a message, you'd better know what kind of message you're sending.

Egor Abramenko's Russian sci-fi thriller Sputnik takes as its launching point a concept that has fueled plenty of creature features over the years: Something from outer space, something ravenous and implacable, has found its way to earth. In this case, it hitchhiked here in the belly of cosmonaut Konstantin Veshnyakov (Pyotr Fyodorov), who becomes host to a symbiotic organism during the trip home from the International Space Station, falling unconscious when the creature emerges for short periods at night. Locked up for everyone's safety in a remote research facility, Konstantin is studied by military scientist Semiradov (Fedor Bondarchuk) and psychologist Tatyana Klimova (The Bourne Supremacy's Oksana Akinshina), the latter of whom is already in hot water with authorities for her tenacious, risky approach to treatment.

There is another fairly significant component to this story, though: It takes place in 1983, with Russia still known as the Soviet Union, and the Cold War still a driving force in every policy decision. Not surprisingly, there's eventually a component to Sputnik about wanting to use the alien creature as a weapon, as well as state media attempting to control the narrative surrounding what happened to Konstantin and his co-pilot. And suddenly it feels like Sputnik owes a bit more to the original Alien than the idea of an extraterrestrial menace that originates inside a human host. It could similarly be a story about whether the military-industrial complex's insatiable need to find new ways to kill other humans is the real monster.

But the screenplay for Sputnik—by Oleg Malovichko and Andrei Zolotarev, expanding director Abramenko's 2017 short The Passenger—doesn't have a particularly strong idea what to do with its back-in-the-U.S.S.R. setting. There's much more time spent setting up the backstories for Tatyana and Konstantin, establishing the dynamic of whether they'll ultimately be adversaries, or allies, or even lovers. We see a long scar down Tatyana's spine as she stands in the shower; what impact has her history with serious injury had on her unorthodox methods? We learn that Konstantin has an illegitimate son living in an orphanage; how will this motivation affect his actions?

Things get even more complicated once Tatyana figures out that the alien symbiote thrives on inspiring a cortisol release in its victims—that, essentially, it feeds on fear. That's a nifty idea, albeit not a particularly new one for genre fiction in general, but one that could have been given a interesting twist in the context of a film set in a time rife with anxieties over potential global catastrophe; 1983 happens to be the year that the nuclear weapon-themed dramas The Day After, Testament and Special Bulletin all emerged. Sputnik, however, drops the notion almost as soon as it's introduced, just like virtually everything else that's specific to its ostensible era. Set this same movie in 2019 Russia, and it's hard to see how virtually anything would need to change except the VHS tape player in Konstantin's room and a need for the now-obligatory "why don't cell phones work" exposition.

What remains is a fairly nuts-and-bolts monster movie, and the monster itself is a slick creation—a nearly translucent, insect-like being not-so-coincidentally evocative of Alien's freshly-emerged "chest-burster." The simple gory pleasures of its lethal attacks make for fine popcorn horror entertainment, which only feels disappointing because Sputnik promises subtext that it can't or won't deliver. There's nothing wrong with making a tale that's only about an alien that eats human brains, as long as you don't pretend it's a tale that will ask viewers to use theirs.