The sympathetic portrait in I, Tonya defies assumptions. 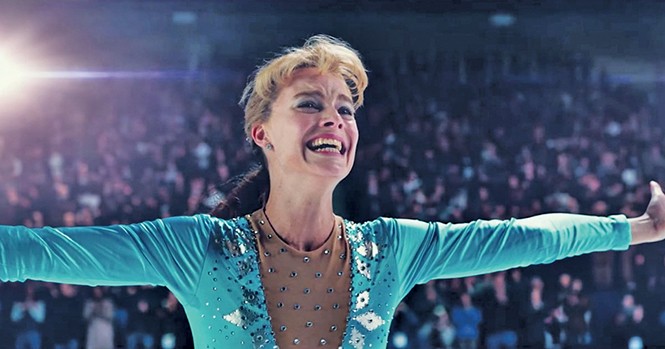 This is the story of I, Tonya, not I, Eric, but let me begin with a relevant personal detail. When the Tonya Harding/Nancy Kerrigan brouhaha was dominating news coverage in early 1994, I was an LDS missionary, quarantined from current events. I eventually pieced the story together—primarily through David Letterman reruns—but I had so little personal connection to the people involved that I couldn't keep them straight. Was it Harding who kneecapped Kerrigan, or vice versa?

Going in with few preconceived feelings about Tonya Harding, my mind wasn't blown when, in the end, I felt nothing but sympathy for her. This cheeky, hilarious biopic—written by Steven Rogers (Hope Floats) and directed by Craig Gillespie (Lars and the Real Girl)—seeks to redeem an unfairly maligned woman, an almost superhuman athlete whose low-class status kept her from being embraced by the figure-skating community, and who showed strength despite being abused by her mother and husband. Viewers who have long seen her as a trashy villain will probably have a harder time accepting this perspective than I did, but that's their problem, not mine.

Gillespie begins many years after the fact, with Tonya (Margot Robbie), her mother LaVona (Allison Janney), her ex-husband Jeff (Sebastian Stan) and a Hard Copy producer (Bobby Cannavale) giving to-the-camera interviews about the infamous Incident. We return frequently to these interviews for perspective and commentary, often with LaVona or Jeff disputing the veracity of the scene we just watched and insisting they were never as cruel as Tonya portrays them. Other times, it's the Hard Copy guy laughing about what a crazy time this was, how it was "a story populated solely by boobs."

That's an understatement. Onscreen titles assure us that the story comes from real interviews these people gave back in the '90s, clips of which are seen over the closing credits to prove that, yep, they were as nutty as Gillespie and Rogers make them seem. LaVona—an oft-divorced chain-smoker who shows no outward signs of loving her daughter (or anyone)—sees Tonya's potential at a young age and forces her to become a fierce competitor. By their own admission, the Hardings are poor rednecks with unrefined tastes, so Tonya is an awkward fit in the prim world of figure skating. Gillespie revels in her big '80s hair, homemade costumes, profanity-heavy language and hard-rock skating soundtrack without exactly making fun of her, though he doesn't exactly not make fun of her, either. That delicate balance is maintained for most of the movie.

As a teenager, Tonya meets Jeff Gillooly, a whiny, mustached dope who's sweet at first but soon starts hitting her. Jeff's tubby, boastful friend, Shawn Eckardt (Paul Walter Hauser), the sort of doofus who claims to have special-ops training, leads Jeff into his dumb plan to take out Tonya's chief rival, initially simply through psychological warfare until things turn more bluntly violent. Unless you, like me, were in a news coma circa 1994, you know the rest.

What's new is Robbie's career-best, warts-and-all performance, convincingly playing Tonya at ages ranging from 15 to 40 and earning our compassion without pleading for it. Robbie can be scathing one minute, then insufferable—Tonya's a real pill—then heartbreaking, but she's never inauthentic. Janney is masterful as LaVona, who's trickier to play because she seemingly has no positive qualities, yet comes across as genuinely human, if monstrous. And while I'd never noticed Hauser in anything before, his scene-stealing work as Shawn Eckardt suggests a deep reservoir of comic talent.

Gillespie does his due diligence with respect to the skating scenes, using CGI and other magic to put us on the ice with Tonya, sharing the thrill of victory and the agony of broken laces. Though it's irresistibly funny and filled with insane (but true) details, this is ultimately a sad story about a woman who was mistreated from day one, overcame obstacles to achieve brief glory and then lost the one thing that brought her happiness. Those who have hated her for almost 24 years might have to reexamine their feelings, but at least the guilt trip is an entertaining one.CW