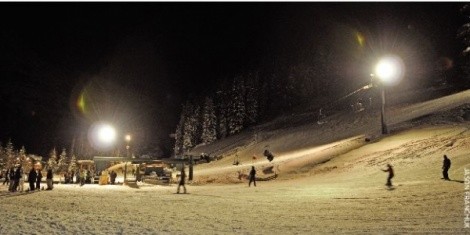 Nighttime skiing was already strong in the area, but Sundance certainly enhances the variety.

An idea 13 years in the making is now a glistening, almost-fantasy reality at the Provo Canyon enclave. Night skiing started on the front mountain four days before Christmas.

Sundance staff members report that in the daytime, unless someone knew there was night skiing there, the extra gear is hardly noticeable. There are a few spots for skiers, riders or even spectators to grab a warm drink and sit by a fire pit while listening to the sweet sounds of plush snow being zoomed through. “It’s just magical, isn’t it?” says mountain operations manager Jerry Warren.

The question for years around these parts was whether skiing would hinder what owner Robert Redford has tried to achieve as far as quaintness and environmental sanctity. Could the narrow road leading up to the resort handle the traffic? Would there even be an interest from locals in skiing there, when Sundance has the shortest season in the area? If the response to the night shift is any indication, Sundance will become a “travel treat” for those outside of Utah County.

Five other Utah ski resorts offer action past the typical lift-closing time of 4 p.m. Warren believes that his place has caught up with the others that sit fairly close (including Brighton, Park City and Snowbird) in facilities and snowmaking qualities, and that there is more than enough business to go around.

Brighton is a strong locals’ choice, and Park City and Snowbird can cater to a lot of visitors who are staying slope-side. Night skiing is an enticing option to have in the area, noted Park City’s Meisha Lawson, because some visitors “enjoy the ability to get a full day of skiing in after arriving into Salt Lake International Airport, while locals love to be able to get in a few runs after a hard day of work.”

Sundance’s front mountain will be illuminated on Monday, Wednesday, Friday and Saturday nights until the end of the season. That plan will be evaluated at the end of the winter. For now, sessions run from 4:30 to 9 p.m., costing $25 for adults, $18 for children and $10 for seniors.

Warren points out that a resort of Sundance’s size cannot exist on tourists alone. “Utah County, and even beyond that, has blossomed,” said Warren, who has also overseen operations at Snowbird and in Oregon before starting at Sundance 13 years ago. “We’re leaving so many wonderful experiences on the table (if night skiing didn’t exist); it makes so much sense. We’re doing this at the right time. And our mountain, even at night, offers a good variety of terrain for all types of experience.”

At December’s “Lights On” ceremony, commemorating 40 years since Redford founded the resort, former Salt Lake City Mayor (and Redford pal) Ted Wilson told a story about how Redford was always talking about Sundance, using the saying, “a way of life.”

The owner, Wilson says, has gone back and forth about what it was, and whom it was for. Ultimately, Warren said, Sundance reached the point where “we’ve recaptured a real good local clientele … when we were once on and off with locals. Now, the question’s been answered: Not only do we want them, we need them. We embrace them. ... We’re more than a ski resort, but we’re definitely in this as a ski resort.”

So, how did Sundance work its way to the dark side? Studies actually started over the summer, when the resort features its increasingly popular full-moon lift rides. On those clear nights, upward of 1,000 visitors were there between 9 and 11 p.m.

Sure, that’s summer, when it makes sense to get out of the Wasatch Front heat. But Warren insists winters are just as worthy of an escape. “A lot of times, the heating from the day remains, and it doesn’t get cold until after midnight,” he said. “It really is pleasant up here.”

That’s true, in more ways than just the weather.