Skinny-dippers busted in the middle of the night. 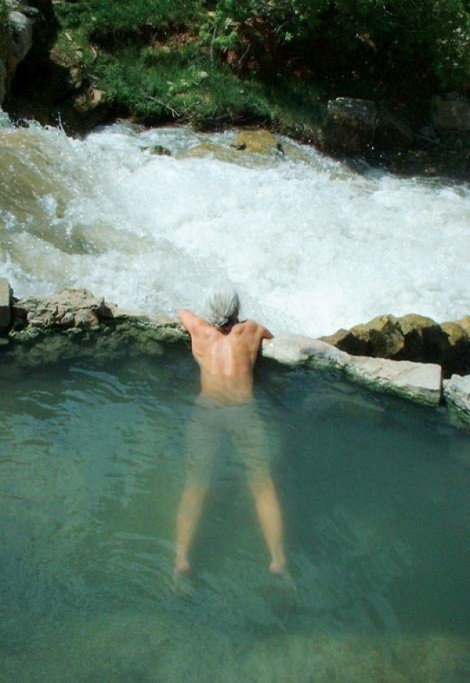 The Utah County Sheriff’s Department sparked uproar among the naturist community after deputies issued lewdness citations against eight skinny dippers at the remote Diamond Fork hot springs near Spanish Fork. At least one of the individuals cited plans to challenge the citation, a national naturist group has promised to intervene and a local minister has accused the county of infringing on religious rights. Some are calling for a nude “soak-in” to protest.

While this is not the first instance of skinny-dippers being cited at Diamond Fork, local naturists say, a new development has them concerned: The U.S. Forest Service intends to remove a 3-year-old sign at the trailhead that says “Nudity Is Not Prohibited.” The sign is regrettably misleading, Forest Service spokeswoman Lorraine Januzelli says, because the county is entitled to enforce state laws against nudity in the forest. They plan to take it down as soon as possible.

But officers should not enforce every law with equal vigor regardless of circumstances, says Wisconsin-based Naturist Action Committee Executive Director Bob Morton. Morton hopes to work with local naturists to convince the county that enforcing the lewdness law at Diamond Fork may be legal but is a poor use of county resources because “clothing-optional” standards are traditional there and not problematic. He also hopes to save the sign, which he says appropriately warns naked-phobic hikers about what they might encounter.

“If there’s a falling-rock sign near a mountain, then someone points out that a rock has fallen, you don’t take the sign down,” Morton says.

The trailhead to Diamond Fork hot springs is about 16 miles east of Spanish Fork in the Uinta National Forest. Following a 2-mile hike, soakers will find three small, sulfur-smelling, algae-bottomed pools of varying temperatures that rest between the trail and a small waterfall. Local naturists say people have been bathing nude there for decades, even before the pools were improved with cement about 10 years ago. Families and Boy Scouts also use the area.

The uproar was sparked in October when Catalyst magazine writer Katherine Pioli and seven friends ventured to Diamond Fork hot springs to soak and drink wine. She wrote about the experience in the December issue of the magazine.

Pioli and friends set out after dark, bypassing the first pools for a more-distant set of pools about a mile up the trail. They soaked nude there for about two hours before a man in a red Utah sweatshirt approached them and asked for marijuana. They said they didn’t have any, after which four other men approached the pools with flashlights, identified themselves as Utah County Sheriff’s deputies, and forced the bathers to get dressed, then issued lewdness citations to each bather. Pioli wrote that only one of five officers turned off his flashlight while the women dressed, though she asked them all to do so.

Pioli, a Forest Service firefighter like five others in the group, believed nudity was permitted. She also understands that not everyone appreciates nudity, so they did their best to be accommodating.

“We were really careful that night, and shocked at what happened,” Pioli said from a cell phone in Lebanon, where she is vacationing. “We went in late at night, and we avoided the lower pools because there were already people there.”

Only one other person encountered Pioli’s naked group prior to the deputies, and that person stripped down and joined them.

Pioli said she’s not a nudist, but soaking naked in a natural hot spring seems more natural than remaining clothed. Her court date is set for February 2010, when she returns to the United States. She plans to challenge the citation.

Not even the Forest Service can give a detailed history of Diamond Fork hot springs. Forest Service spokeswoman Kathy Jo Pollack said the pools are naturally occurring, but the concrete improvements are due to “the help of the interested public.”

Holladay’s Heartsong Healing Center spa owner Janae “Jesse” Bird knows one man who coordinated some of those improvements about a decade ago. Bird’s friend became less active in the naturist community after receiving a lewdness citation at another of Utah’s hot springs. Because he works with juveniles, Bird says, he rarely ventures to the springs anymore.

“A lot of times, when Christ spoke, it was out in nature,” she says. “That’s where we feel most close to God, and close to each other.”

Bird hopes to organize a “soak-in” to protest the lewdness citations, but no date has been set.

In a paper she wrote for her church in 2007, Bird quoted the Gospel of Thomas, a book of Jesus’ teachings thought to be written about 100 A.D. but not discovered until 1945. In it, disciples ask Jesus, “When will you appear to us?” Jesus responds, “When you strip without being ashamed, and you take your clothes and put them under your feet like little children and trample them, then you will see the son of the living one and you will not be afraid.”

Michael Martindale, of Midvale, a Mormon naturist activist, believes his church’s doctrine is compatible with friendly skinny-dipping, and the idea that nudity is always sexual and immodest is a misguided corruption of Christian principles. He’s not alone. There are at least two LDS skinny-dippers´ Websites that are actively updated: LDS Skinny-Dipper Connection and LDS Skinny-Dippers Forum.

“[If] our bodies are ‘temples,’ what do we do with our temples? We put them on a hill, we make them beautiful, we glorify them. We light them up at night so everybody can see them,” Martindale told Sunstone Symposium attendees in 2008. “So, if our bodies are temples, shouldn’t we be doing that with our bodies?”

The lewdness citations are pointless, Pioli said, and will not deter nudity. After camping overnight, Pioli’s group warned others about the bust. “There were some people [that] kept bathing suits on, and some that didn’t. So, it’s not going to stop.”