Skip the Robust in August 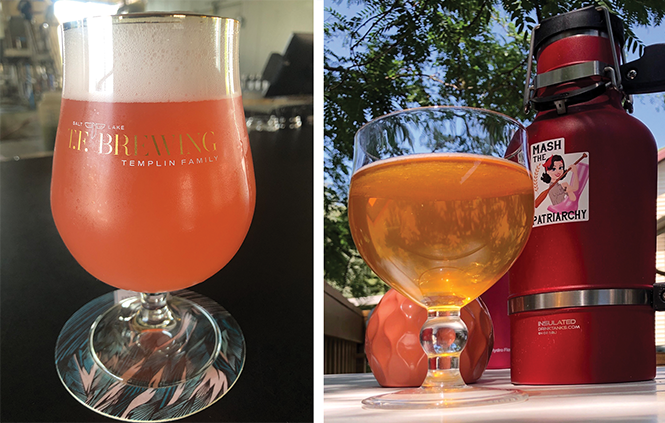 August is just around the corner, and with it comes the hottest time of the year. This generally is not the time for complex, chewy beers; it is more for precisely-flavored, hydrating beers. I'm not saying a double IPA can't be in your future, but when you're fighting for shade under your kid's beach umbrella, you'll want a beer that doesn't make you feel like a bag of cream of mushroom soup.

Templin Family Watermelon Berliner-weisse: It pours a creamy-looking pastel orange color that's tinged with red watermelon. And there's no doubt that the aroma is watermelon: It's juicy sweet with the gentle subtleties of a traditional Berliner-weisse underneath, just missing the coriander component. It's not overly potent, but it gets its point across.

As it washes over the tongue the Berliner base and watermelon come through nicely to form a tangy, refreshing collective flavor. Smooth, clean wheat malts with the residual and unique gentle sweetness of watermelon pulp emerge, accented nicely with the tanginess of Jolly Rancher watermelon candies. The texture is lightly chewy and clean. The tanginess works well with the drying from the base beer's tartness. Carbonation in this 5.0 percent ale is moderate, generating a medium frothiness and a very crisp finish, with body that is medium for the style, and light to medium overall. Balance is nearly even—sweet to acidic and tangy. Alcohol presence is very light, and there are no off characters. Nice and tangy finish, highly drinkable.

Overall: Some watermelon beers come across as cucumber to me—then I found out that they're part of the same melon family. Whew, I thought my palette was going to shit. Anyway, I don't find any of that cucumber character that is noticeable with many artificially-flavored watermelon beers. Without compromising the traditional and simple flavor parameters, the watermelon comes off strongly in this beer, but as an equal partner with the yogurt-y tart finish. Very enjoyable.

Kiitos Summer IPA: This beer had disappeared from Kiitos' line-up over the last couple of years. I found it a nice quenching session IPA when it first hit at 4.0 percent alcohol; now that it received its 5.0 percent boost, I'm curious to see if it's still quenching. It pours a slightly hazy golden-honey-orange color, with moderate amounts of burnt orange highlights. Slightly stronger than moderate aromas of mango, papaya, grapefruit and melon reach out and massage the nostrils, with a light to moderate amount of caramel sweetness.

Up front on the palate there are light to moderate flavors of biscuit, bread and caramel malts, with a light to moderate amount of honey sweetness. That is followed by slightly stronger than moderate flavors of mango, papaya and grapefruit peel. The melon component is much less present in the flavor, as this is clearly designed to be a citrus-forward ale. Some dank resinous hops try to impart a light to moderate amount of aggressive bitterness, but it never really happens, as the beer opts for a more subtle hop approach. The finish is slightly lingering, leaving dank hop flavors behind.

Overall: This 5.0 percent beer isn't super complex. Then again, if it were, it would ruin the whole quenchable/drinkable showcase that the brewers were going for here. It gives you all of the tropical and citrus flavors you crave, while (for the most part) keeping your mind in the game. I should point out that I destroyed about 85 percent of my growler over the course of an hour or so. That was a mistake—misjudging its drinkability gave me an early bedtime. Don't make amateur mistakes like I did.